Lakeside Dining 2000: Many Restaurants, Not Much Water 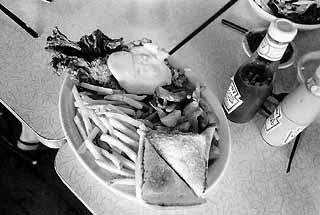 Sam Hill, one of the oldest eateries on the lake, is a joint just waiting for sundown. The party that happens there on most nights haunts the day. You can feel the beat of the silent band, you can hear the boisterous laughter even in the silence of a hot afternoon. This is a restaurant that is meant to be shared among a group, preferably a large group, of friends.

While we visited one recent afternoon, we had to make do with the dozens of friendly ducks who roam the deck instead of the usual throng that comes with sundown. They are unusually bold, just waiting for you to drop a French fry or part with some chips. The indoor diversion comes in the form of the lobsters in the tanks, just waiting to be plucked for your dining pleasure.

This is one lake dining destination that isn't suffering too much from the drop in the lake levels. The restaurant and docks sit right on the water so they rise and fall with the water. The space is huge, although it is broken up in a way that prevents you from feeling like you're eating in an airplane hangar, even when it's a slow afternoon.

The menu is standard lake stuff: burgers, sandwiches, etc., with the slightly more upscale additions of steak and lobster. The menu is another clue as to the true spirit of the place: It's packed with photos that look like pictures in your average high school yearbook. There appears to be a photo of the homecoming king, the school dance, the senior picnic, etc.

Our samplings included the chicken-fried steak, a half-pound burger, and the grilled chicken Ceasar. All were respectable, if unremarkable, versions of the Texas roadhouse basics. The chicken-fried steak was suitably crisp although the cream gravy lacked much peppery punch or beef stock origin. The burger was a fine handful; there was enough fat in the mix to make for a juicy sandwich and the half-pound starting point was cooked down enough to make the size manageable and satisfying. The chicken Ceasar was loaded with crisp romaine and topped with slightly dry chicken. The accompanying dressing was decidedly rich.

This is friends food. This is pass-me-that-and-let-me-have-a-bite food. This is food that you need to soak up the 16oz. signature drinks that are listed in the menu. This is fun food, and this is no doubt fun central on the right night.