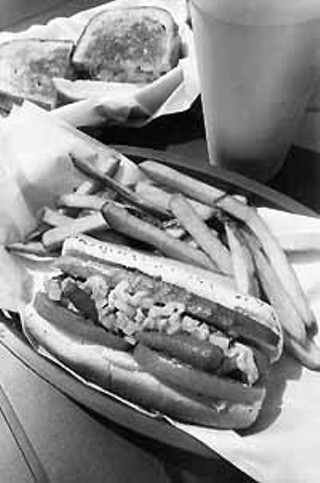 My friend Stuart grew up in Chicago. In an e-mail some months ago, he began waxing nostalgic about Windy City hot dogs and the pitiful excuses for same available in New England, where he has lived for decades. "What's so special about a Chicago hot dog?" I asked in my innocence. After blathering emotionally about steamed poppy-seed buns and celery salt and sport peppers and Wrigley Field, he gave up in exasperation and said, "Hey, you just have to see for yourself. Otherwise, you'll never understand."

This stuck in my mind. A couple of days later, I met my colleague Peter in the hall at the office. I remembered that he was a nice Polish boy from Chicago.

Now I was really intrigued. How had I lived my entire life without ever having tasted something that worked up such obvious passions of the palate, that resonated so profoundly in far-flung Midwestern hearts?

Well I don't call myself a serious culinary detective for nothing. I'd like to tell you that I was on the next plane to O'Hare, but it was easier than that. After a bit of cyber-sleuthing, I not only learned what constitutes a classic Chi-town dog, and that a fanatical subcult of aficionados exists around the country, but that I could actually get one of these puppies right here in River City. Lunchtime the next day, I was there.

The moment I walked into Lucky Dog on Spicewood Springs Road, I knew I wasn't in Austin hot-dog land. For one thing, people working there were wearing Bulls caps, and they hadn't learned to pronounce those flat "A"s in Longview. I ordered the "Famous Chicago Style Hot Dog," took one bite, ordered another, and raced back to the office and the telephone. "Hey, Stuart," I shouted with my mouth full, "You are never gonna guess what I'm eating right now." After his lame attempts about tacos and burritos (yeah, that's all we eat in this state), I told him.

With thinly veiled skepticism, he said, "I bet it doesn't have sliced tomatoes in it."

"Well, no way it's got a real Vienna Beef wiener," he said in a small voice.

You could have heard his howl in Nova Scotia. "You're killing me! Not fair! I can't believe you can get a real Chicago hot dog in Texas! Isn't it just the best?" With my mouth still full, I had to agree that it was.

George Moudry opened Lucky Dog Chicago Style Sandwich Factory & Grille in August 1999, two years after he moved here from Chicago in conjunction with his wife's 3M transfer. A former advertising agency executive, he quickly observed that the Austin food scene was not offering what he missed most himself -- authentic Chicagoland red hots. "If you grew up with these things, you can't live without them."

Although he had no previous experience in the restaurant business and had done no market research except follow his heart, George purchased a defunct Golden Fried Chicken building near the corner of Spicewood Springs and Mesa, completely remodeled it with the help of family and friends, designed his own graphics and advertising, and opened two months later without ever having practiced operating the equipment. Within the first 20 minutes on opening day, the place was packed with homesick and grateful Chicago transplants, and the rest, as they say, is history. Within the next 18 months, George plans to open four more Lucky Dog locations in the Austin area.

George estimates that dog-deprived former Chicagoans -- who travel from as far as Lockhart, San Marcos, and San Antonio -- constitute 60% of his business. To meet their (and his) exacting standards, he imports all his ingredients from Chicago, from the Vienna Beef wieners to the poppy seed buns to the mustard, pickles, relish, and sport peppers. "Everything except the onions and tomatoes."

Oh, yeah. I would be remiss if I didn't mention that, in addition to the lovingly constructed Chicago-style hot dog, Lucky Dog serves a griddled Maxwell Street Polish dog with sauerkraut and spicy mustard, a classic Italian beef sandwich, a really respectable Reuben sandwich, and several variations of pork chop, Italian sausage, and meatball sandwiches. And if you just can't break with Texas tradition, they can fix you up with a chili cheese dog, too.

Postscript. I had occasion to be in Chicago a few months ago. While walking down the street with my colleagues, I began telling them how I had learned to get really excited about hot dogs. Ten paces later, I heard a voice behind me calling, "Lady! Hey, lady!" I turned around, thinking I'd dropped something. A guy clearing snow in front of an office building was leaning on his shovel and yelling to me, "Lady, ya wanna try a real hot dog? Right over there in Union Station. Gold Coast dogs. Tha best. Check it out."

And later that day, I did. It was indeed an excellent red hot, and so were the ones I ate at two other hot-dog joints before I left the city. I think I've joined that fanatical subcult. But you know what? Not a one of them was a bit better than my initiatory Chicago-style hot dog at Lucky Dog, right here in Austin. Ya wanna try a real hot dog? Check it out.

Those Chicago folks. They take their hot dogs seriously.