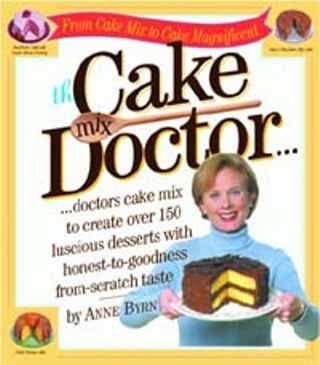 Thank God for Mom! She taught me a hard lesson after I completed French culinary school. I had the audacity to tell her the right way to cook something -- about three times. She simply turned to me and said, "Beth, you are such a food snob!" I still stand by my philosophies of cooking, but she has become my gauge for "real" people food, which comes in many forms: the rotisserie chicken from HEB, tuna casserole, or a ready-made box of cake mix. So I wasn't surprised one day when she came running into the kitchen excited about a new cookbook called The Cake Mix Doctor. She said all of her friends were talking about it. Although I didn't want to admit it, she piqued my interest. Particularly when she said it is a cookbook devoted to recipes made from boxed cake mixes. I had been secretly using cake mixes and adding my favorite ingredients to them for years. I wondered if this cookbook was going to be the busy cake lover's dream come true.

Anne Byrn, an award-winning food journalist, created The Cake Mix Doctor after she wrote an article in a Nashville newspaper titled "The Cake Doctor Is In" in which she invited readers to send in their own cake-mix recipes. After an outpouring of recipes and a few good connections, The Cake Mix Doctor was born. As Byrn explains, "When you doctor them (cake mixes) up and work your magic on them as I explain in this book, they are not only different creatures, they become your own signature desserts."

Byrn and her friends' signature desserts can be seen best in the first few pages of The Cake Mix Doctor. In an unusual three-color page spread, each of the 150 cake mix desserts can be viewed along with the recipe name and page number. This is the real deal, too, with only a little food styling. I spend much of my time analyzing and creating recipes, so it's refreshing to just browse and pick which recipe I want to make based on a picture, which isn't something I usually advocate. The only downside to having pictures with page numbers at the front of a book is that you go directly to the recipe. Which is why you buy cookbooks, however, you'll miss some comprehensive cake-mix information.

Foremost are the chapters titled "Doctoring Cake Mixes" and "Cake Mix 101: How to Use This Book." Byrn includes great information about the basic chemistry of how add-in ingredients react in different cake mixes. She lists staple pantry ingredients and standard cake-baking tools necessary to bake the perfect dessert or cake. The recipes are divided into 11 categories starting with Chocolate Cakes and ending with Lighter Cakes. There seems to be a certain logic in that. For testing, I chose one recipe from each of these chapters: "Cakes With Fruit," "Cheesecake and Gooey Cakes," and "Incredible Bars and Comforting Cookies." Overall, each recipe I tested is easy to follow and quick to whip up -- not surprisingly, since that's the charm of making a dessert from a boxed cake mix. I mixed up each of the three recipes in less than one hour.

Byrn ends her book with "Frostings, Glazes and One Compote," a fine finish to a sweetly delicious book. I can understand my mother's excitement over this cookbook. It is a compilation of all the cake-mix recipes we grew up with. Not only is it a lip-smacking trip down memory lane but it will provide you with impressive dessert alternatives that will be admired by the most ardent food snob!