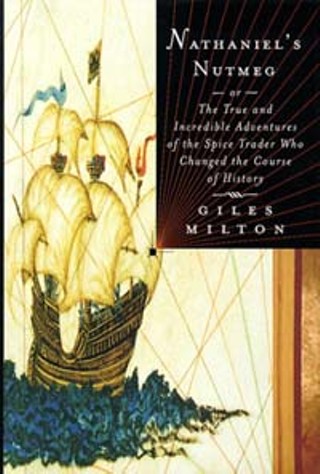 Nathaniel's Nutmeg, or, the True and Incredible Adventures of the Spice Trader Who Changed the Course of History

In 17th-century Europe, one of the most coveted commodities was the nutmeg seed. A necessary ingredient in the fashionable recipes of Shakespeare's day, the nutmeg seed was also an indispensable medicinal spice, rumored to cure everything from flatulence to the common cold and even plague. In cities such as London or Amsterdam, it commanded princely sums -- a sack of nutmeg that was purchased for a penny in the spice islands could be sold for an incredible 60,000% mark-up in Europe. Prior to the 16th century, only the Portuguese knew the secret of the spice's origin, guarding it with a vigilant eye toward maintaining both economic and military advantage. At that time, the only known route to the East Indies was around the Cape of Good Hope, a long and treacherous journey that killed half the men who attempted it. With the discovery of new geographies to the West, though, other nations began to take an interest in finding an alternate passage to the coveted Spice Islands. So with banners proudly waving, new nations entered the age of exploration in search of the elusive East Indies.

In Nathaniel's Nutmeg, or, the True and Incredible Adventures of the Spice Trader Who Changed the Course of History, Giles Milton chronicles the 16th- and 17th-century race to the East Indies (now part of Indonesia) and the quest of two nations, England and Holland, to dominate the nutmeg trade. Nutmeg was so highly valued in Elizabethan society it could make vast fortunes for its merchants overnight, and the competition for control over its trade touched off a 100-year Dutch-English rivalry featuring political intrigue, bloody battles, and bold acts of heroism. More adventure tale than food history, Nathaniel's Nutmeg is populated by a fascinating assortment of seafarers, explorers, and men of extreme daring who risked their health and sanity for the glory of returning to Europe in a ship laden with precious spices. The formation of the East India Company in 1599, and the Dutch East India Company in 1602, launched thousands of sailors into faraway and often cruel waters in the race to gain control over Europe's most prized spice. Before it ended, many would lose their lives to scurvy, the bloody flux, and war. What eventually emerged from this competition was no less than the remapping of the global geopolitical landscape.

Milton's story is a highly engaging and thoroughly researched account of these explorations. The text is liberally peppered with quotes from the diaries, letters, and treaties of the day, illustrating not just the wild political forces behind the race, but also the more mundane aspects of life aboard a ship no bigger than a modern yacht. Milton tells us the story of William Keeling, whose crew performed Shakespeare off the shores of Africa. And William Hawkins, whose eccentric diplomacy led him into the service of India's Great Mogul. Although the English and the Dutch serve as the major players in this tale, we nevertheless catch glimpses of the Spanish, Portuguese, Chinese, Japanese, Indians, and Ottomans, which proves how truly global the world economy was over 400 years ago.

The story culminates with a bloody showdown on the tiny island of Run, England's last Spice Island stronghold in the nutmeg-rich Banda Archipelago, wherein the story's namesake, British captain Nathaniel Courthope, heroically defends the tiny island against the Dutch. Courthope's four-year stand on Run signaled England's final attempt to continue the game. With his death, and Run's eventual capitulation, the Dutch seized control of the island and effectively won the spice race. However, Courthope's death became a symbol of English patriotism for years to come. It was his death and the loss of Run that England invoked during peace negotiations between the two nations almost 40 years later, when the British and Dutch eventually formed a compromise: The island would officially go to the Dutch in exchange for official British ownership of an insignificant piece of property on the other side of the globe -- Manhattan.

Nathaniel's Nutmeg is packed with names, dates, and facts, and because the author's story is not always linear, the book can at times become confusing. However, readers who are fascinated by the tales of early exploration and the forces behind it, will find the book well-paced and thoroughly readable. Nathaniel's Nutmeg offers a thrilling glimpse at 17th-century commercial intrigue and one spice that profoundly affected history.