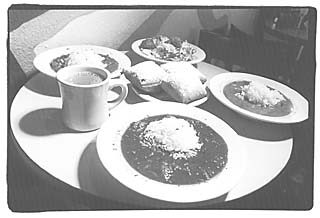 The freshly fried beignets radiate warm, sweetened waves of scent. The aroma swirls through the air, taunting the senses, watering the tongue. Bite into the crisp, fluffy pillows, spilling over with powdered sugar, and know the simple pleasures of homey, hearty doughnuts: This is a Crescent City Beignet. Of course, friends who are true beignet connoisseurs tell me that nothing can really compare to the authentic Cafe du Monde variety, eaten on the streets of the French Quarter at dawn. But considering that's not always an option for working Austinites, I am happy to recommend the Crescent City version.

Since Crescent City Beignets opened last spring, I have been surprised and consistently pleased by the quality of the cuisine they offer. The beignets are always fresh and hot. They don't make a batch in advance and then let them sit under a heat lamp. Instead, you order them first, then they cook them. Consequently, there's always a bit of a wait, but in the end, the warm box of freshly sugared beignets proves its worth.

In addition to the signature beignets, this fledgling luncheonette prepares a limited menu of well-known New Orleans-style specialties. Until recently, the little diner served only a single special each day. On my last visit, though, they had just begun a new lunch format in which they offer up to three different choices daily. I was delighted to be able to choose from chicken and sausage gumbo, rib-sticking red beans and rice, and shrimp Creole.

In their warming table, and on the palate, these stewy treats bear the telltale signs of slow food. The creamy, meaty flavor of the red beans and rice spreads out slowly across the tongue with deliberate progression. The soulful seasoning of the chicken and sausage gumbo bubbles up from a dark roux, heavily accented by smoked meat.

On other trips to Crescent City, I have licked my plate clean of crawfish étouffée. Zesty and buttery, this simple dish resounds with the deep flavors of shellfish, vinegar, and onions. Also on the menu was a crawfish bisque -- long on fish taste, but disappointingly short on crawfish. Still, in light of their other merits, I consider that to be a minor flaw in the overall fabric of flavors catered at Crescent City.

Each lunch item comes with a side salad of crisp romaine, lightly coated with tangy vinaigrette, shredded Parmesan, and crumbled Gorgonzola. No croutons with this; but three hearty hush puppies complement the nimble simplicity of the salad.

Crescent City Beignets sits at a convenient location on West Sixth Street in Old West Austin, and although the restaurant itself feels a little antiseptic, tables set under their awning outside invite patrons to spend extra time watching the cars go by as they devour their beignets and sip chicory coffee. Crescent City Beignets is the second restaurant owned by Marcy Tucker and Wayne Bunch, whose first opened Crescent City Beignets in Houston, and who recently signed a deal to franchise four more stores there. Considering their initial success in the Austin market, let's hope they continue to expand their daily menu at this restaurant to include other favorites such as barbecue shrimp, jambalaya, or the more filling, crusty po-boys. Cajun/Creole cuisine seems to be a much-demanded yet largely untapped market among Austin restaurants. For now, however, friendly service, great food, and reasonable prices make Crescent City Beignets a quick fix for Cajun cravings.