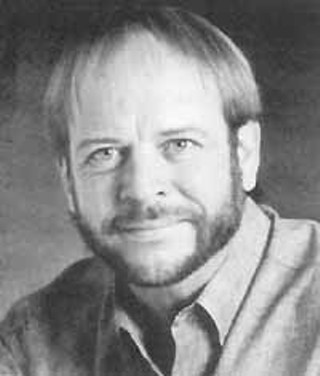 Don't start Dave Arnsberger talking. As an original yuckmeister of the Uranium Savages and founding father of SPAMARAMA™, he has much to say. Some of it revolves around the band, some of it revolves around the pink stuff in the can. Some of it just revolves. Austin was a very different place in 1972, when Oklahoma-born, Houston-raised Dave Arnsberger came to attend the University of Texas. Plans to pursue a degree in anthropology lay somewhere just beyond hanging out and drinking beer, "but it would have left my career in ruins," he puns badly, "and I found out what top pay was in the field." Naturally, that was his cue to form a rock & roll band.

"I knew Bob and Steve Gay from Belair High School in Houston, and Pat Reynolds was here," Ansberger recalls. "Every day after school we'd go to Bob's little shack in West Campus and jam. We started writing goofy songs, and Bob came up with the idea to call us 'the Uranium Clods.' We'd crash parties we weren't invited to and say we were the entertainment. We'd play a decent song or two then untune the guitars. People would start to leave and we could eat or drink all we wanted."

The origin of the Uranium Savages has long been a part of Austin's music lore, and the tale is a colorful one. The Uranium Clods joined the Sons of Coyote and called themselves the Gypsy Savages but united as the Sons of Uranium Savage playing against the Marsh Mongrels at the now-famous Battle of the Bands at the Ritz in 1974. The Savages hammed it up outrageously for their portion, threw the breakers when the Marsh Mongrels took the stage, and ultimately won the contest. This loss may well have caused Mongrels bassist Clifford Antone to rethink his career choices and opt for club ownership instead.

Arnsberger went on to take his place as one of the most creative of the Savage frontmen. Along with Reynolds, Sonny Carl Davis, Bill Ellison, and Kerry Awn, he hammed it up, parodying Elvis Presley, Johnny Cash, and the Blues Brothers. He sang "Give me those Texas skies" with the fervor of an East Texas gospel soloist. His most wicked work lampooned the reigning progressive country sound of the day, and as "Roadhog" Moron, star of the "Regressive Country Glitter Show," he skewered Nashville and Austin as deftly as slicing any potted meat product.

The cosmic cowboys loved it as much as the stoners. "We were outdrawing Doug Sahm, and broke the bar record in all three Soap Creek Saloon locations," but by the Eighties personnel changes in the band meant bringing in new players who had new ideas. Arnsberger's vision of the Uranium Savages was at odds with co-frontman Kerry Awn and flautist David Perkoff. Several splits occurred with the band, but when the final break came, it hit hard. After surviving the Seventies and the Eighties in the band, Arnsberger hung up his Savage hat in the Nineties.

"I'd had a son, I wasn't making money, and it wasn't fun anymore. I just said, 'You know what, guys? Adios.' I was working as a landscape contractor and had to drive through traffic every day -- seven months of summer. Then in 1998 my wife got the job opportunity of a lifetime and we moved to Colorado." 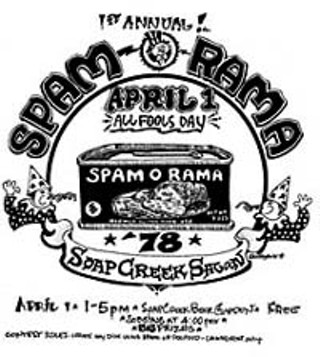 Arnsberger loved the Colorado mountains and the crisp weather, but he realized something. "I missed my friends, working at Austin City Limits in artist relations, I missed the pretty girls -- the women in Boulder look like direct descendants of mountain men -- I missed good Mexican food, I missed my church." More than anything, Dave Arnsberger missed SPAMARAMA™.

Back in January 1978, Arnsberger and a friend had a running joke about chili cook-offs. The unemployed twosome bandied about the notion of a "SPAM®-Off" that quickly became SPAMARAMA™. The calendar gods smiled: The Savages had an April Fool's Day gig booked at Soap Creek already. Three hundred spectators and 27 entries later, the first SPAMARAMA™ was an unqualified hit.

Over the next 21 years the crowds would swell to upward of 9,000 SPAM® fans as dozens of entries vied for categories from Taste to Showmanship. SPAMPERS™, SPAM® Daiquiri, SPAMONI™, Jurassic Pork, SPAMSHI™, and SPAMISH™ Omelette were among the memorable presentations, Arnsberger recalls fondly. "One of the best dishes was when Pat Knight made Chicken-Fried SPAM® the fourth year. It was good gravy and good crust."

Not everyone joined in the celebration of SPAM®. Its parent company, Hormel, finally "tracked me down and we called it SPAYUM-A-RAMA that year so we weren't using their name." Eventually, Hormel mellowed, begrudgingly providing SPAMARAMA™ with official T-shirts, clocks, ball caps, and other swine swag. Still, a spy from the executive ranks attended the SPAM® Toss at the La Zona Rosa event a few years ago and objected to the event, so it was replaced with the SPAM® Relay. "They didn't like the name SPAM® Cram either, but that's tough."

"Every year they try to stop me from doing something else. Last year they complained about the 'Pork Pull.' Remember when they took Jim Henson to court over the Spa'am character in that Muppet movie? Hormel spent days in court claiming this, that, and the other. When Henson's lawyer got up, he said they only have two words to say to Hormel. 'Lighten up.' The judge ruled in favor of Henson.

"Now, I don't have Henson's money, but after that it set a precedent. This year we will feature all of the events -- SPAM® Throw, SPAM® Toss, SPAM® Cram, and the SPAM® Call. If they want to threaten me, well, come and threaten me."

That's an earnest challenge. Arnsberger takes his SPAM® salute seriously, undaunted by 11 venue changes in 22 years and even switching charity allegiances this year from United Cerebral Palsy to the SIMS Foundation. To what does Arnsberger attribute the appeal of this good-natured event?

"This event appeals to the Old Austin sensibility and traditional sense of humor, the people that moved here for Barton Springs, the Hill Country, and all that stuff that's going away. But we've kept the younger generation involved and that's the way to keep it alive.

"Subliminally, when you see or hear the word SPAM® or a can of it," Arnseberger says, "you're gonna go to the grocery and buy one. I've always wondered what the SPAM® sales for March and April have been like in Austin. Guess I'd have to go through Hormel for that."

Margaret Moser was a judge the year the Spam™dinistas™ started a food fight during the SPAM™ Wellington presentation. Inexplicably, she agreed to judge again this year.