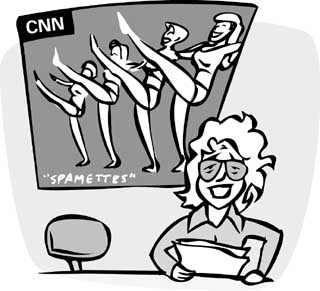 This year, the party was held in the beer garden of the third Soap Creek Saloon location on South Congress, where the Terrace Motel used to be. The original Potentate of Potted Meat, Smitty's chef Pat Knight, won the professional division with his Chicken-Fried SPAM® with cream gravy. Knight was attended by a bevy of scantily clad beauties known as "Smitty's Girls." "They were my entourage," Knight recalls. "It was my wife, some of the waitresses from Smitty's, and a couple of ringers from the Yellow Rose." This tradition caught on, and for several years the party was graced with the appearance of The SPAM-ETTES™. Local ABC affiliate KVUE did live coverage of the party, which was picked up by CNN, providing SPAMARAMA™ its first international coverage.