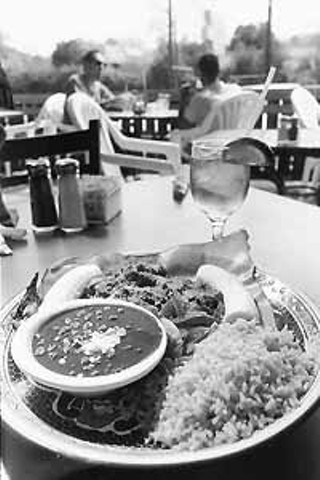 So you've heard that Mary Steenburgen, Sandra Bullock, and even the President of the United States, for chrissakes, go to Güero's Taco Bar and you want to see what all the fuss is about. Well, as you find out quickly, during SXSW (and even other times too) some of the fuss is about the wait. If you have any hopes of getting to the next show, you had better give up on Güero's and set your sights elsewhere. You don't have to set your culinary sights any lower, and you only drop your star-gazing quotient incrementally when you decide to take your eating dollars to Curra's Grill.

Housed in the former home of Güero's Taco Bar, Curra's is a worthy successor. There must have been scores of people who mistakenly walked in to this place following Güero's exit who had an incredibly memorable meal and didn't realize it wasn't the restaurant they intended to patronize until the bill arrived. And I wager none of these folks were disappointed.

Which is not to say that the cuisine is identical. Curra's offers the unusual with the familiar: Pecan cream sauce in addition to green tomatillo. Fish baked in banana leaves as well as snapper Veracruz. Chile con queso and queso flameado. Fresh bananas can be added to the rice, adding a flair to the offerings. And the warmed borracho sauce adds zip to just about anything on the menu. The fare simply bursts with freshness. This is not a Tex-Mex, processed-cheese, flavor packet-based enterprise. It's real Mexican food, the type you're more likely to encounter in interior Mexico than in the interior USA.

While it's next to impossible to go wrong anywhere on the menu, some items are worth special note. The tortilla soup (caldo tlalpeno) is a beautiful and flavorful take on the Mexican chicken soup favorite. The red tortillas accompanying the soup are served as triangles circling the shallow rim of the bowl instead of the usual strips atop the broth. The result is a visual feast in addition to the flavorful one held within the bowl.

The enchiladas allende make for a mild, tasty, and very rich take on the Mexican standard. Poblano peppers, the mildest variety this side of the generic green pepper, are paired with smooth Monterrey cheese inside tender, homemade corn tortillas, and the roll is smothered in a dense, rich, somewhat sweet pecan cream sauce. It's a whole new outlook on the old favorite.

The fish options are uniformly excellent. The leaf cookery (cactus and banana varieties are available) results in moist, flavorful, flaky fillets that highlight the freshness and delicate nature of the snapper. The more familiar Veracruz recipe is bolder, what with the olives, capers, and whatnot, but the integrity of the fish is not overwhelmed.

Curra's is an unexpected gem, the kind of place you wish you had discovered all on your own. The popularity with the hometown crowd, and not a few visiting celebs, quickly dispels the notion that you're onto something undiscovered. Despite its notoriety, you just may be able to avoid the more sizeable crowds on Congress Avenue and squeeze into a little, colorful table for an energizing breakfast or a sustaining lunch before facing a day of nonstop conferencing.