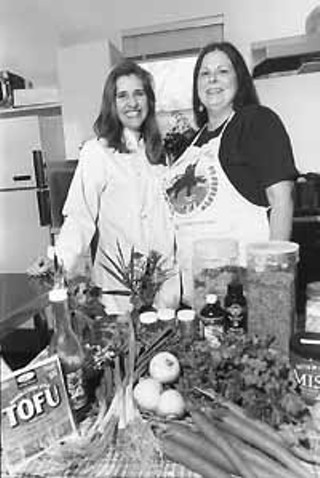 Macrobiotic cooking is defined as cooking for a whole or complete life, looking at food as energy both to fuel and to heal the body. In simplified form, the concept prescribes a diet that includes the following: whole grains; miso and other soy products; fruits and vegetables native to the region where you live, eaten only fresh and in season; and other foods in moderation.

When Fran Moody and Dawn Black met at a macrobiotic cooking class in the South Austin home of Elizabeth Ortiz-Foster a few years ago, they had no way of knowing that Black would eventually own the school and Moody would be working at her side. Ortiz-Foster founded the Natural Epicurean cooking school in her home in the early Nineties, recruiting students through her work at Casa de Luz, a local nonprofit macrobiotic community educational center. Her growing reputation as a macrobiotic teacher and counselor/diagnostician attracted other students by word of mouth, among them a leukemia survivor named Fran Moody. "When I heard Elizabeth's story about how she had healed herself of colon cancer with a macrobiotic diet and remedies, I wanted to learn everything she knew. I wanted to learn as much as I could about anything that would help me keep the leukemia in remission," Moody recalls. She began studying with Ortiz-Foster in 1994 and eventually completed a comprehensive course that certified her as a macrobiotic cooking instructor. During her course of study, Fran met an energetic young bride named Dawn Black who was interested in macrobiotics as a means to maintain a healthy, active life. When Ortiz-Foster started a family and moved away from Austin, the new friends who had come to macrobiotics with very different motivations became a well-balanced team. Black purchased rights to the school and Moody became her teaching partner and curriculum writer in what is now called the Natural Epicurean Academy of Culinary Arts (NEACA). In what seems like almost perfect symmetry, the new school is located in the Cielo Room at Casa de Luz, an upstairs space equipped as a kitchen and a classroom.

The Natural Epicurean Academy of Culinary Arts offers recreational cooking classes such as Cooking with Aphrodisiacs, which took place earlier this month, or the current series of classes, titled Transitions to Healthier Eating. They also offer a comprehensive Natural Foods Training Program that provides a Certificate of Completion in Macrobiotic Cooking. "We have about 20 students enrolled in the certificate program," Moody reports, adding that the number of recreational students varies depending on the class offerings. Most classes include hands-on instruction with students rolling nori or rice balls, learning chopping skills with traditional Japanese knives, and the correct techniques for operating pressure cookers. Each class receives hand-outs with four to six recipes. The hand-outs includes information and explanations about what part the particular foods and techniques play in the overall natural whole foods/macrobiotic scheme. Once the dishes are prepared, students consume the food and participate in the clean-up.

Through a Web site (http://www.naturalepicurean.com) and a listing in the Shaw Guide to Cooking Schools (Shawguides, Inc., $22.95, paper), the NEACA is attracting students from around Texas and the rest of the country to their certificate program. Once a student completes coursework in the Macrobiotic Cooking Program, they must perform an unpaid assistantship in a commercial kitchen and pass both a written exam and a cooking demonstration in which they transition a dish from traditional methods and ingredients to macrobiotics. NEACA graduates are finding interesting career options around Austin and the rest of the country. Graduates and some senior students are working and/or cooking locally at Casa de Luz, Whole Foods, and Martin Bros. Businesses as diverse as a health retreat in Hawaii and a New England company that sells miso have sought Natural Epicurean grads as employees. Recent graduate Janet Wong, for example, is a manager at Casa de Luz and one of her classmates has gone on to teach macrobiotics in Vancouver, B.C. After well-known local pastry chef Alain Braux closed Amandine Bakery two years ago, he enrolled in the Natural Epicurean certificate program to broaden his cooking knowledge and marketability. Though Braux continues to make a living creating elegant French pastries and wedding cakes at the Barr Mansion, his macrobiotic training has inspired him to eventually return to college for a degree in nutrition. (Braux completed his demonstration exam by turning a traditional French crepe preparation into a healthier macrobiotic recipe. Check it out on the school's Web site.)

Long-range plans at Natural Epicurean call for accreditation from the Texas Workforce Commission so that students will be eligible for federally funded student loans to finance studies. Black and Moody expect the school to be accredited within the next two to three years. Meanwhile, in addition to the growing certificate program, the talented duo produce and present several weekend seminars such as a popular January offering titled "Creating & Maintaining a Balanced Weight" and the upcoming "Health in the Fast Lane and Raising Healthy Kids." The reasonably priced seminars are usually scheduled on Saturdays and include a specially written information booklet on the topic and a gourmet macrobiotic meal. Black and Moody occasionally take their seminars on the road, presenting them at corporate wellness programs, medical support groups at hospitals, even church groups and retirement homes. Each month, Black presents a free lecture at Casa de Luz titled "Intro to Natural Whole Foods/Macro Cooking" to acquaint curious newcomers with a basic understanding of what macrobiotics actually means.

As their reputations grow locally, the hard work and talents of Dawn Black and Fran Moody are becoming highly regarded in the national macrobiotic community, as well. The well-matched team joins other macro teachers, counselors, and consultants at the Kushi International Conference held in Westfield, Massachusetts, every August. Twice, they've been honored to be among only 10-15 teachers invited to the intensive five-day teacher's conference at the Kushi Institute after the international meeting. Through contacts made at these meetings, Moody has begun her training as a macrobiotic diagnostician/counselor with renowned health counselors Blake Gould and Lino Stanchich while Black has been able to arrange for Stanchich and possibly even macro founder Michio Kushi himself to lecture at the Austin school and give private consultations.

Considering the tremendous progress made by the working partners in the Natural Epicurean Academy of Culinary Arts since Black purchased the school, there's little doubt they'll continue to grow both locally and nationally and reach their goal of accreditation. Each half of the partnership brings her particular life experience, resulting interests, and goals to the equation, plus a great natural energy both ascribe to the macrobiotic diet and lifestyle.

In addition to developing and writing NEACA curriculum materials, Moody does private food and lifestyle consulting with clients who are interested in adding a macrobiotic diet to their arsenal for fighting disease or the aging process. She's her program's best advertisement. In addition to the nearly 100 pounds she has lost, Moody knows that practicing a macrobiotic lifestyle has helped to keep her leukemia in remission and to manage the pain of her chronic rheumatoid arthritis. Moody describes herself as being "perfectly comfortable" working with people who want to pursue macrobiotic remedies in addition to Western medicine as well as those who are seeking strictly alternative therapies. A dynamic and unflappable teacher, Black appeals to a younger, healthier crowd, often young mothers like herself who want to maintain good health and raise healthy families. Her obvious radiant health and engaging personality attracts students and inspires their enthusiasm. Indeed, the combined talents of these two women offer an education for the whole (macro) life (biotic).