The Sturdy Dependability of Ray's Steakhouse 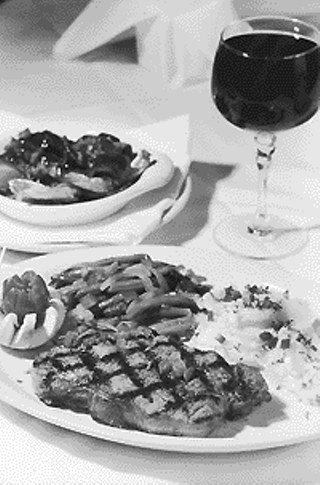 My brother is 6'6" tall. Although not Texan by birth, he is Texan in nature (in the good ways, I mean). He's friendly, outgoing, hospitable to a fault, and he loves his meat. Give him a generous portion of some quality meat, spuds of some sort, and access to a bar (he's not much of a wine man), and he's happy. He is also professionally successful, so he can afford lots of steak. And he also loves swanky looking surroundings. I thought of my brother a lot while dining at Ray's Steakhouse.

Housed in the former Ruth's Chris Steakhouse on Guadalupe, the restaurant exudes manly posh. As the hostess told me when I admired the cowhide seats of the barstools and the sofa in the waiting area, they use all parts of the cow in this establishment. Game heads are mounted throughout the interior, including a massive longhorn -- its horn-span looked to be six feet -- that stared at me throughout my meal. Wall sconces are fashioned from more petite antlers. And the oversized menu ("Ray-sized," as they like to say) is printed on heavy paper attached to backing with a piece of bone. This wildlife accoutrement is paired with the traditional steakhouse chic: dark wood paneling and heavy white linens. It's the kind of interior that could be featured in most any movie from the Forties or an episode of Dallas.

And speaking of old-fashioned, the theme of retro-chic is echoed in the menu. It recalls that time when a fancy night at a restaurant meant STEAK. The food is straightforward, utterly lacking in pretension or frilliness. Ray knows his meat and no place of Ray's is about daintiness.

Take, for instance, the beginners. The bacon-wrapped shrimp ($6.95) include six enormous shrimp, which are grilled, paired with jalapeño (though I couldn't detect any), then wrapped with a whole slice of bacon. Good? You bet; a kind of seafood rumaki deal (but ham-fisted all the way). And there are the local legends: the cheeseburger appetizers ($6.95 for six). Only in a Ray-sized world would cheeseburgers be considered an hors d'oeuvre. These are almost identical to the party burger described by Washington Post food editor Phyllis Richman in Jane and Michael Stern's Square Meals. On a very soft variety of French bread (Ms. Richman's mother used Pepperidge Farm party buns) is a dollop of yellow mustard, a dollop of ketchup, a slice of pickle, and a half-dollar-sized morsel of ground meat. This is topped with a melted slice of American cheese and served open-faced. Ms. Richman recommends eschewing the condiments for cucumber and pickle alone, but I didn't see anyone at the table of six men who ordered Ray's cheeseburgers taking exception to this detail.

Entrees include a choice of salad or soup, but even these are substantial. The two soups offered are green chile corn chowder or steak and potatoes soup (included with an entree or $3.50/cup, $4.25/bowl a la carte). These are not tastebud-teaser consommés that might otherwise begin a rich meal; they're hearty, filling soups that would be considered the main course in many a home. On one visit, I opted for the Caesar salad. The crisp romaine was blanketed by shredded Parmesan, and the dressing had a lovely, detectable tang of anchovy, but there was just so much of it, especially the dressing; that stuff is rich!

And once you're on to the main event, you know the fare will be big and hearty. The menu offers such options as grilled or fried chicken breast, lamp chop, fish, and recently added whole lobster, but you know what people come here for: the beef. I opted for the 14-oz. New York strip ($25.95) and my husband had the 6-oz. filet ($17.95; 10-oz. also available). I paired mine with scalloped potatoes and Santa Fe corn pudding (yes, I know corn is also a starch, but I was intrigued). My husband, the more sensible one, opted for green beans and garlic mashed potatoes.

The beef was cooked exactly to specifications (medium rare) and boasted a tasty crust that revealed the extreme heat at which it was grilled. Ray's uses choice-grade Angus beef, and it is a full-flavored variety. It had been a while since I had tucked into an honest-to-goodness steak, and this satisfied any hankering I might have been neglecting. There was a thin membrane of fat along one edge which didn't reduce the ample portion by much, but enhanced the flavor of the cut substantially. My husband's filet was also properly cooked, and while the flavor of the filet cut doesn't have as much of a kick as the strip, it is meltingly tender. His did not disappoint.

My scalloped potatoes were, oh -- what's the word? Oh yes: rich. It boggles the mind to speculate how much butter goes into the preparation of this casserole of sliced potatoes, garlic, cheese, and butter. I don't mean to imply they weren't good; they were. But delicate they were not. And my corn pudding was a shocker. I had been expecting a pale, soufflé-like creation and on my plate was a pile the curious tone of Georgia red clay. One bite revealed the reason for the pudding's color: chili powder. Lots of it. While other menu items use spice gingerly, the pudding uses it with abandon. It's not a visually lovely item, but it is quite tasty. The garlic mashers were made with Yukon Gold potatoes of a lovely consistency with some whole pieces of potato intact; the garlic in them was pronounced without being overwhelming. The green beans were beautiful whole beans cooked with bacon -- a hallowed Southern tradition, I know, but to me one that completely overwhelms the delicate flavor of the vegetable. Still, they were a vibrant green color and cooked so that their freshness was still evident.

The portions at Ray's are generous but not obscene. Oddly enough, my husband's dinner plate was undersized -- like a large salad plate -- so that items were somewhat crowded. Still, with this kind of food, no one walks away with their appetite less than sated, no matter what the size of the plate may be.

On a visit at lunch, the menu was virtually identical, although the variety of steaks offered is more limited and more salads are available. This time I branched out a bit with a Cobb salad ($8.95). Traditionally composed of grilled chicken strips, crumbles of bleu cheese and bacon, avocados, and hard-cooked egg on a bed of lettuces, Ray's version adds shredded carrot and shredded Cheddar as well. I guess they were worried a diner might not get enough! The salad was an utterly satisfying, hearty meal, but it was served on a somewhat small plate not unlike the one for my husband's entree. This resulted in an inability to toss items together, and more than a few items being deposited on the table.

The wine menu is appropriately weighted to reds, and while it isn't exactly a selection of depth and breadth, it offers plenty of domestic wines to choose from, though not many under $50. Some wines are available by the glass, however. From what I observed, Ray's easily does as much business with the hard liquor (lots of steak and martinis here) and beer as with the wine.

It's hard to believe that many patrons would have room for dessert after dinner at Ray's Steakhouse, but they offers bananas Foster, chocolate crème brûlée (Ray-sized!), brownies à la mode, and more to sweeten the end of your meal. My husband and I simply weren't up to it the night we were there, but I bet my brother would have taken a whack at it.

The service at Ray's is attentive. The big man himself roves the room, inquiring at various tables if the dishes are to the patrons' satisfaction, and a hostess stops by to check on diners, too. Our waiter at dinner was solicitous, if a tad under-informed. He asked if we had any questions about the menu, so I inquired about the term "Provimi," used to describe the veal. He responded with a plaintive, "Oh why did I ask if you had any questions?" and admitted that he didn't know. To his credit, he checked with the kitchen and promptly returned with the explanation. (Apparently, Provimi is a variety of veal, just as Black Angus is a type of cow.)

Ray's appears to have found a following: Several tables at dinner were obviously filled with business associates (predominantly, if not exclusively, men) taking a meeting over a meal, or perhaps wooing a client. And it's a great joint for that kind of thing. No one is going to have to spend much time perusing the menu, wondering what in the world wasabi is. This is food you know; there are no surprises. There is real value in the prices and a sense of "occasion" with the decor. And when my brother comes to town, I'll treat him to dinner and I won't go broke springing for it; he's gonna have himself a swell time.