Feasts That Define the Millennium 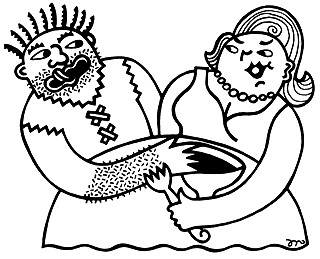 The past millennium has witnessed profound changes in the ways people obtain access to food, cook food, and eat food. Whereas once the meal involved simply eating what was available from the household garden or local market, today it may incorporate hundreds of ingredients obtained from producers all over the world. Once, food preparation lasted the entire day. Today, microwaves and electric ovens cook our food in minutes. While gourmets of the last millennium ate with their fingers from bowls passed around the table, today we all have our own plates and generally consider it rude to eat with one's fingers at the table. Despite these sorts of changes, one aspect of gastronomy, though, has remained constant through time -- the feast. It is the most primal form of human consumption, wherein food, the original commodity, plays a starring role in a production that brings groups of people together, honors events from the past, and forges alliances for the future. Indeed, the communal meal has figured prominently during events throughout all of history. Thus, in honor of the new millennium, we have put together a compendium of feasts that help to represent the past 1,000 years. Some feasts might seem familiar, while others may seem very foreign indeed. However, each feast reflects clearly the ideals, values, and traditions of a certain moment in history.

The White Feast of Kublai Khan

In approximately 1279, Marco Polo witnessed a banquet given by Kublai Khan, ruler of China, in honor of the "white feast" of the new year. Polo reported that thousands of guests attended. The banquet hall showcased an enormous casket of gold decorated with bas-relief animals. Inside the casket was another container which held wine, and several smaller gold urns filled with horse and camel milk. The guests drank from gold cups, while servants stood at attention, ready to answer any request. While the guests ate and drank, they were entertained by Khan's acrobats, who performed magic tricks, juggling acts, and amazing feats of contortion. As for the food, Marco Polo only recounts that it was magnificent. However, we might assume that the feast featured some of the imported wines, raisins, or Greek partridges available in the markets. According to Polo, there were fruits of every imaginable type, fish brought in daily from nearby lakes, and copious game animals. When Marco Polo encountered Kublai Khan, Chinese gastronomy was already two millennia old and incorporated sophisticated ideas about flavor balances between sweet and salty, spicy and mild, hot and cold. The stories he carried home with him helped to enliven the European taste for exotic foodstuffs, laying the foundations for a medieval cuisine that incorporated the spices of Asia with an ancient food tradition inherited from the Greeks and Romans.

The Feast of the Medicis

In 1513, in Rome, a banquet was held in honor of Guiliano de Medici. The feast took place on the square of the capital, where 20 or so invited guests ate on raised platforms. All around it, rows of seats crowded the square so that uninvited guests could come to witness the feast. The hors d'oeuvres consisted of cakes made with pine nuts and marzipan, biscuits with wine and custards. With the first service, platters loaded with roasted meats appeared -- warblers, quail, turtle-doves, meat-pies, capons in white sauce, and a ram with four horns, poached and re-stuffed in its own skin, standing in a golden basin. More courses followed, each featuring obscene quantities of meat presented in spectacular still-life arrangements. There were sugared capons covered in gold, goat in a green sauce, roasted birds, removed and then stuffed back into their own feathers, and a garden of jasmine containing a stuffed eagle gripping a rabbit in its talons. Each guest received a linen napkin which held little birds that escaped once the napkin was opened. The entire dinner consisted of at least a dozen services, and the guests ate until they were uncomfortable from so much food. In many ways, this feast embodies the medieval ideal, in which an elegant repast relied on the effect of presentation to impress guests who mainly valued quantity over quality, and spices over freshness.

During the Spanish conquest of Mexico, Bernal Diaz recorded that Montezuma's cooks prepared more than 300 dishes every day. Montezuma chose from chile stews made with quail, partridges, pheasants, ducks, deer, and peccary, all served on the best Cholula pottery. He ate freshly prepared tortillas, pan pachol, and he drank a spiced cacao aphrodisiac from gold cups. As a digestif, his servants brought him fruits such as papayas, avocados, and tomatoes. While he ate, a troop of performers entertained him with songs, stories, and jokes. Montezuma then ended his meals in a most urbane manner -- with a smoke from his tobacco pipe. Although the modern reader might not be surprised by this New World repast, the 16th-century reader no doubt found this banquet profoundly foreign. This is because prior to that time, products such as tomatoes, chocolate, avocado, tortillas, and tobacco were unknown to the rest of the world. The meeting between Europe and the Americas radically affected the way the world ate during the second half of this millennium. Foods such as chocolate, corn, and tomatoes found their way into European, Asian, and African culture within a century, completely remapping the world culinary landscape.

The Progress of Pilgrims

After landing on the rocky New England coast in 1620, the pilgrims barely escaped starvation. Their food stores depleted, and unprepared for the brutal New England winter, the English pilgrims actually resorted to stealing from the Indians during those first months of hunger. They managed to survive, however, mainly through the help of a formerly enslaved Wampanoag Indian named Tisqauntum (aka Squanto), who showed them how to catch eels, how to recognize wild foods, and most importantly, how to plant maize. When the pilgrims harvested their first American crops in 1621, only the maize yielded enough grain to last the following winter. Meanwhile, the Old World wheat, barley, and peas they had planted failed. Still, that first meager harvest managed to ensure the pilgrims' survival; consequently, they planned a Thanksgiving banquet in which they entertained 92 Native American guests. On the menu was duck, roast goose, deer, clams, eels, leeks, watercress, and wild plums. Bread made from corn shared the table with English steamed puddings made from wheat, and popcorn fell on European tastebuds for the first time. Some accounts claim that the feast lasted three days. Most significantly, though, the foods they ate that year combined a bit of the old with a bit of the new, thus giving birth to an original American cuisine integrating the techniques of old world gastronomy with new world ingredients.

The Feast of the Dead

Alexandre Balthasar Laurent Grimaud de la Reynière, renowned Paris lawyer, journalist, and critic, must have foreseen the coming French Revolution when he began giving his diners philosophiques in 1783. At one diner he sent out invitations to a funeral procession and banquet. His aristocratic guests arrived in mourning and were led to a black-curtained room dominated by central catafalque. The dinner service consisted of numerous courses, one of them composed entirely of pork. And the guests ate them from their own open coffins, while spectators strolled through the room to watch the feast taking place. But the coup de grce came after all had eaten, and M. de la Reynière began informing the guests where and for how much the foods from the meal could be purchased. At the time, this outrageous meal scandalized his wealthy guests, who felt betrayed by M. de la Reynière's morbid commodification of the feast. Yet this famous mortuary-themed meal also signaled a turning point in the history of European gastronomy, which had until that period been dominated by the aristocracy. In a sense, it prefigured the death of the ancient caste system in 1789, in which suddenly, access to the fruits of luxury were opened to anyone, so long as they had money to pay for it.

The last meal in the first-class dining room aboard the Titanic was, by most accounts, splendid. The menu for the night of April 14, 1912, first featured various hors d'oeuvres, followed by oysters and then soup. The dinner course offered salmon with mousseline sauce, filet mignon, chicken Lyonnaise, lamb with mint sauce, and roast duck with apple sauce. The service also included vegetables such as creamed carrots, potatoes, and green peas. The next course served boiled rice, watercress with roast squab, asparagus vinaigrette, and pate de foie gras, while desserts offered a choice of Waldorf pudding, peaches in chantreuse jelly, eclairs, and French ice cream. The guests that night included the Astors, the Guggenheims, Denver millionaire Molly Brown, movie star Dorothy Gibson, and an aide to President William Taft. Although it was impressive for the time, this sort of luxury nevertheless typified the travel experience for many passengers, who felt that the art of the journey was just as important as the final destination. It was only a few decades after the Titanic sunk that sea travel declined as commercial planes began offering passage across oceans in a fraction of the time it took a ship to travel. The airplane drew the curtain on the type of sophisticated, social travel that characterized voyages such as those offered on the Titanic. With it, the world entered an age of compartmentalized travel, marked mainly by speed, discomfort, and poor cuisine.

Ever wonder what the astronauts ate during the first trip in space? It wasn't gourmet cuisine. The first off-world meals consisted mainly of bite-sized cubes of dried food, freeze-dried food, and semiliquids in aluminum squeeze-tubes. Although the astronauts found no difficulty eating in zero gravity, they complained about the bite-sized dried foods, which made crumbs that landed in their instruments, causing technical problems. After these early missions, though, astronaut grub began to improve so that by the time the Apollo missions flew to the moon, they had the luxury of hot drinks, shrimp cocktail, pudding, and chicken with vegetables. Shorter missions even offered fresh bread and cheese. Although off-world cuisine continues to improve with every mission, it's clear that space gastronomy emphasizes functionality over flair. It may still be a while before the first space restaurant opens its portals.

Eat your heart out, Austin! For those who didn't have reservations, the printed menu will have to suffice. At Jeffrey's this past New Year's, dinner featured a number of the queer cross-cultural flavor pairings that have come to define gastronomy in the 1990s. Foie gras was served alongside a balsamic vinegar, mango, and peppercorn sauce. Mushroom crêpes brushed up against bourbon chutney and almond brie cream. Maine lobster mated with mango watercress salad, Meyer lemons, and sea urchin. Not international enough? Well, how does the sea bass served with a carrot ginger soufflé and porcini mushroom cream sound? Or the duck, shrimp, and black bean ravioli with white truffle thyme sauce? The Absolut-cured salmon with micro greens, capellini, and champagne créme fraîche seems like a winner -- if you don't mind mixing a Swedish vodka-cured salmon with small vegetables, Italian pasta, and a French sauce. Xenophobic eaters beware, because it looks like fusion food might be here to stay. But then, when it tastes this good, who cares?