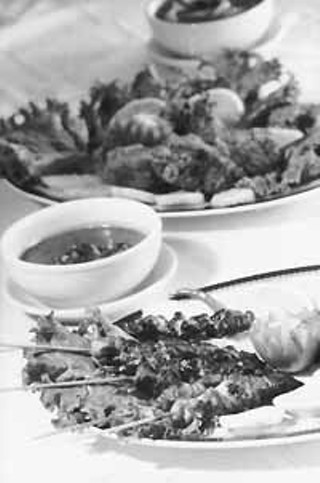 Was that Dessert Island or Desert Island? If it's the latter, and surrounded by ocean, then I would first want to stock up on fishing supplies at the Austin Angler. I'd grab a whole mess of leaders and tippets for my fly rod, and a healthy assortment of Clouser's, Deceiver's, Crazy Charlie's, Gotcha's, and Merkin Crabs so I could catch all the fish I wanted (until I was rescued, of course). Then I would next want to gorge myself for the first few days of far-flung isolation on my favorite following 1999 foods (in no particular order):

1. The Greek Salad With Grilled Chicken ($4.75/3.95 chickenless) from Kismet Cafe on 24th, just off the Drag. It's the consummate comestible for the big but (or big butt) light lunch crowd. Laden with Romaine, feta, veggies, and gyro-chicken, it fuels you for the rest of the day while your waistline wanes.

2. Three recent food products that have materialized: Blue Bell's Cherry Limeade Sherbet -- hearken back to the days of the soda fountain cherry limeade, but freeze it, and put it in a tub that makes Tupperware obsolete. Original Stewart's Ginger Beer -- old-fashioned style ginger ale with a bodacious bite that explodes in your mouth. Woeber's Sandwich Pal Sweet and Spicy Mustard -- the perfect pairing with anything, so good you can eat it by the spoonful.

3. Shredded Dried Scallops With Snowpea Leaves and the Special Combo Dinners at Din Ho Chinese BBQ. Get a group of your pals together and for around 9-12 bucks a person, you'll reach culinary nirvana -- one step of which is the formerly mentioned dish. Pick the peas, but eat the leaves -- they're the best part!

4. Kasugai Brand Roasted Hot Green Peas. The package reads, "A happy present from the Earth." Is it just another bad translation? Hell no! These addictively delicious crunchy, roasted, dry green pea treats are dusted with wasabi green horseradish powder that will open any sealed, cedar-fever sinus. Bother Chai at Say Hi Market until he starts carrying them.

5. Ma Po Do Fu from Hunan Restaurant on William Cannon -- the most masterful version made in Austin. This spicy dish of tofu and shredded pork in chile sauce is the embodiment of the balance of yin and yang -- perfection on a plate, but get it served in a big bowl so it stays hot longer.

6. Java Noodles -- 'nuff said. They're still one of the most unique tastes in town, with impeccably fresh ingredients and the best blend of exotic spices. Their lunch specials and the Rijstaffel Sunday Brunch Buffet are the best introductions for neophytes, and some of the best dining deals in town.

7. Seafood Soup With Fish Maw and Salt and Pepper Shrimp from T&S Seafood. Both are ethereal and make the perfect pairing. T&S is the undisputed master at cooking the tenderest squid, and the seafood straight from the tanks is the freshest found around. The old Rainbow Inn risen and resurrected.

8. Weekend Buffet at Classic Thai. All you can eat and tasty seafood items, yummy green papaya salad, and steamed dumplings till you drop, along with the usuals. The difference here is that the food is authentically spiced, fresh, and first-rate.

9. Sushi Happy Hour and the Lunch Specials at Korea Garden. Happy hour is Mon-Thu, from 5-7pm -- it's a buck for the starred items, and it's high-quality sushi done right. The lunch specials offer an incredible assortment of flavors and tastes per plate, the price is right, and they're centrally located.

10. Chelo Kabob. Fabulous mall grub -- oxymoronic, I know, but Chelo Kabob is one of the only outlets for first-rate Persian cuisine in this fair city. Huge portions made for splitting, and don't overlook the daily specials, the side dishes, and dips. Irony abounds with side-by-side ice skaters and Near Eastern chow -- a cacophonous setting, yet culinarily superb.

If it was the former, an island actually composed of desserts, then perhaps a glass of milk would suffice.