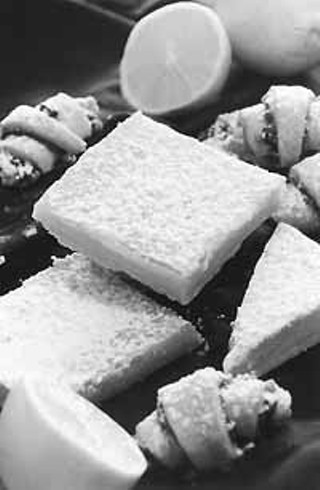 Banished to a desert island, I'll go quietly if I'm allowed to bring a cache of the foods that impressed me most this past year plus a library made up of the 10 best Texas cookbooks and my 10 favorite cookbooks of all time. Perhaps while I'm stranded on the island, I can make good on my millennial resolution to kick my one remaining addiction: I will step out into the brave new world and stop drinking Coca-Cola!

4. Cheese: A supply of French artisanal cheeses with warm walnut toast and a glass of Napa port like the ones served at La Toque in Rutherford, California. A dolce latte gorgonzola drizzled with honey from Peggy Knickerbocker's Central Market class.

5. Seafood: A weekly ration of Saffron Seafood Risotto with shrimp, crawfish, scallops, mussels, and clams from Vespaio and Mussels in Garlic Curry Sauce from the Clay Pit.

7. Side Dish: In spinach season, regular servings of the Jalapeño Creamed Spinach as prepared by Bill and Cheryl Jamison from their book American Home Cooking.

9. Desserts: Big slices of Tres Leches Cake from Rather Sweet Bakery with scoops of Haagen Dazs Dulce de Leche ice cream on the side to celebrate all occasions.

10. Burgers & Dogs: Plenty of the world-class Chili Cheese Dogs on toasted fresh baguettes and the mighty Amarillo Burgers with roasted serranos and pepper jack cheese from Casino El Camino -- just because they're great.

1. The Texas Cookbook (out of print) by Austin native and Green Pastures founder Mary Faulk Koock. The person who has my signed copy of this classic is encouraged to return it.

2. Helen Corbitt's Cookbook (Houghton Mifflin, out of print) by the legendary teacher, caterer, and chef who defined upscale Texas cuisine in the Fifties, Sixties and Seventies. Treasure those inherited copies.

3. Old Bakery Baking Book (Heritage Guild of Austin, out of print). The first cookbook I purchased when I moved to Austin is tattered and stained but still in use. 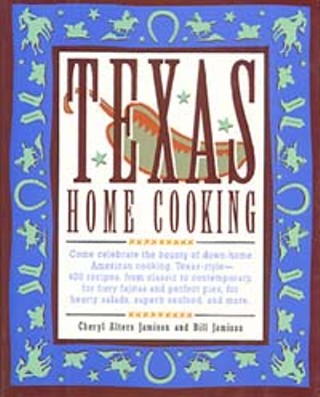 5. Broken Arrow Ranch Cookbook (UT Press, out of print). Ingram game rancher Mike Hughes consulted on the game section of the newest Joy of Cooking, but his personal game recipes and hunting camp secrets are in this slim volume.

7. Threadgill's: The Cookbook (Longstreet Press). Austin entrepreneur Eddie Wilson shares the history and lore of Kenneth Threadgill's fabled joint plus the recipes that have fed hundreds of thousands of satisfied customers.

8. A Cowboy in the Kitchen (TenSpeed Press). The 1999 book by cowpoke-turned-chef Grady Spears and Robb Walsh perfectly captures both the flavor and the spirit of Texas cuisine west of the Pecos.

10. Eats: A Folk History of Texas Food (TCU Press). Folklorists Ernestine Linck and Joyce Roach's excellent book on the roots of Texas cuisine is a must for aspiring food historians.

1. Maida Heatter's Book of Great Desserts (recently reissued by Andrews McMeel Publishing). This 1970s book by the doyenne of desserts was my self-teaching manual and is still very much in use.

2. Julia Child Cooks for Company (Knopf, out of print). My favorite among Julia's early works, I'll need it if hungry sailors come ashore.

3. James Beard's Theory & Practice of Good Cooking (Running Press). First published in the late Seventies, this reliable work by the dean of American cooking was reissued just in time.

4. Better Homes & Gardens Cookbook (1930 edition) I wouldn't dream of leaving home without this family heirloom now that I've discovered it.

5. Joy of Cooking (1972 edition). Though the much-discussed new edition came out in 1998, I'm still partial to the first copy I bought when I began learning to cook.

6. The Store Cookbook (out of print). Bert Greene's friendly, anecdotal 1974 book about his gourmet food shop in Amagansett, Long Island, forever changed my ideas about catering and cookbook writing.

8. Talk About Good (Junior League of Lafayette, Louisiana). One of the bestselling community cookbooks ever published, this spiral-bound beauty is a great testament to the culinary culture of Southwest Louisiana.

9. Cuisines of Mexico (Harper & Row, out of print). Diana Kennedy's groundbreaking first cookbook revealed the rich culinary traditions of Mexico's interior for all the world to savor.