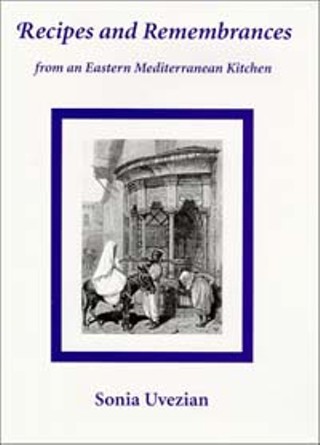 Sonia Uvezian is one of the world's leading experts on Middle Eastern and Caucasian cuisines and the author of several cookbooks on those regions, including works on the cookery of Armenia and the Caucasus. Recipes and Remembrances could very well be the seminal work on the cooking of the Eastern Mediterranean and fills a long-vacant void of scholarly works on the subject written in English. The first 95 pages are devoted to an exhaustively researched treatise on the historical, sociological, and geographical influences that shaped the cuisine, including essays on a variety of topics such as hospitality, meals, and menus, kitchens and utensils, and ingredients. Personal anecdotal information is scattered throughout the book, as are numerous historical references preceding each recipe.

Most readers will remember a vague notion somewhere in the back of their craniums, the part dealing with history classes from grade school, where we learned that this region was "The Cradle of Civilization." What they didn't teach us in high school geography is that Mesopotamia was the birthplace of one of the world's oldest and most distinguished culinary traditions, if not the outright originator of haute cuisine. Ancient Mesopotamian kitchens offered at least 100 kinds of soup, more than 300 kinds of bread, and a sauce made from fermented fish (and occasionally locusts) that was remarkably similar to Thai and Vietnamese fish sauce. Creative chefs were highly respected and well-paid, and even had battles fought over them.

By the eighth millennium BC, the region saw some of the earliest cultivation of crops and domestication of animals, and by the fourth millennium BC witnessed the growth of societies based on large-scale agriculture and mass canal irrigation projects. The Greater Syrians are thought to be the originators of beer (recipes have been found for beer production that date to the second millennium BC), they were the first tavern keepers, and they developed the concept of the coffeehouse. They also compiled cookbooks that considerably pre-date any found in ancient Europe.

Most Americans think of this region as a vast desert and the site of Arab-Israeli conflict, but the Bekka Valley, for example, contains some of the most fertile farmland in the world and grows an amazing array of fruits, nuts, and vegetables. The varied cuisines of Greater Syria have been shaped by a diversity of terrain and microclimates, from subtropical to subarctic. The region also hosts a great variety of freshwater fish and foodstuffs, as well as those found in the bordering sea.

But the hundreds of recipes are the meat of the matter in Uvezian's book. Every possible aspect of any potential meal is well-covered, from ancient preparations to more contemporary adaptations. They are clearly written and easy to follow, and most recipes include variations on the original. The book is lavishly illustrated with historical engravings and line drawings, most from the late 1800s.

I chose to cook a sample menu of appealing-sounding fare from the book at home. Starting with Lahm bi Ajeen, an open-faced meat pie on pita bread, with a topping of lamb, onions, tomato, parsley, mint, pine nuts, and a drizzle of pomegranate molasses. This was the original pizza carried to Italy by either the Armenians, the Anatolians after the fall of Byzantium, or Middle Eastern Jews who settled south of Rome (all three possibilities are presented). The depth of flavor achieved by such simple ingredients was amazing, and it's no wonder that this dish remains wildly popular today in the region.

Next came Meat Soup with Lentils, Pumpkin, Quince, Apricots, and Prunes, which underscores the emphasis of fruits in Arab cuisine. It was delicately spiced with cinnamon and cardamom, and had a sweet-savory taste that was positively addictive. I followed that with Fattush, the classic Lebanese bread salad, composed of romaine, tomato, and cucumber, scallion and red onion, parsley, mint and purslane, topped with a lemon dressing, a sprinkling of powdered sumac, and crunchy bits of toasted pita. This is one of the most delicious and perfect salads I've ever eaten, and this one recipe is worth the price of the cookbook alone.

I ended the meal with a favorite of the region, Farruj Mashwi, which is a young chicken marinated in lemon, garlic, and thyme, charcoal grilled, and topped with Salsa bi Tum, a sauce of mashed potatoes, lemon, garlic, and mint. It might sound strange to American ears, but what could be more delicious or basic than grilled chicken and mashed potatoes -- you've probably never had them combined like this, but trust me, you should. Think of it as Syrian soul food.

Recipes and Remembrances is a title that should reside in the collection of every serious cook or culinary historian. The research and work that went into the production of this cookbook is astounding, and it is as entertaining and informative to read as it is to cook from. But the true prize of Recipes and Remembrances is the range and depth of the incredibly delicious food the recipes will produce.

Sonia Uvezian, Recipes and Remembrances From an Eastern Mediterranean Kitchen: A Culinary Journey through Syria, Lebanon, and Jordan