There's a Reason Chez Nous Has Lasted All These Years

There are certain occasions when one's choice of restaurants requires more care than is typical: first date (well, duh); dinner with client/potential client (how prosperous should we appear?); birthday party location (do we want to say celebration with a capital C or fun and funky?). My husband and I faced such a dilemma some 13 years ago when we arranged a dinner to introduce our parents after we became engaged. Naturally, we wanted the restaurant to be more, well, special than the well-loved eateries we were likely to frequent. The choice had to reflect the momentous occasion we were observing. The cuisine had to be elevated, but not so adventurous that diners would wonder what they were about to eat. There were beef lovers in the mix and fish lovers as well. One set of soon-to-be in-laws had lived in Europe for five years and had developed quite sophisticated palates. The other pair, while having been exposed to many different tastes throughout their years of travel, were mildly suspicious of menus venturing beyond the ingredients and pairings to which they were accustomed. We wanted a place where good conversation (please God!) could be conducted freely. And, as this was 13 years ago, we required a smoking area. We hit on Chez Nous, and the meal proved to be a success beyond all our expectations. The gourmets were delighted by the continental familiarity of the bistro, the native Texans were enthralled by the careful attention to the beef, and we (the fiancés) took full advantage of the scrumptious wine list. Thirteen years later we're still married. Has time been as good to Chez Nous as it has been to us? We've checked in many times through the years, but did so recently to answer that question specifically. Instead of in-laws, we brought offspring.

The interior is quintessential bistro and the cheapest way I know to get that feeling of being in France without the passport hassles. There are the requisite burgundy paisley oilcloth tablecloths, the ubiquitous lace doilies with Pernod bottles housing fresh flowers atop, and the ultra-Gallic lace half-curtains at the windows. A mural of the Montmartre section of Paris adorns the north wall of the intimate dining room. French music is piped in (can you imagine rap music with French lyrics? It happens!). And best of all, most of the waiters sport genuine French accents. Not an Inspector Clouseau in the bunch.

At dinner, there is the menu du jour, a prix fixe bargain which has been Chez Nous' signature since the restaurant's beginnings. The price has gone up slightly since its inception, but for a mere $18.50, diners can choose a first course from among a selection of the soup offerings, a salade Lyonnaise, or the paté maison. The entree is one of the three specials of that day, and dessert is either crème caramel, mousse au chocolat, or brie. On our recent Saturday visit, there were three soup choices: cream of spinach, cream of mushroom, and chilled avocado. Patés were a smoked trout variety as well as a duck liver. The entree specials were ruby red trout with a raspberry buerre blanc, halibut with blackened shrimp with a spicy tomato sauce, and tenderloin of veal with a brandy demi-glace.

Our waiter was well-informed and very helpful as we queried her about preparations and favorites. In fact, we've never known of a waiter who was anything but professional and knowledgeable at Chez Nous. I settled on the veal tenderloin (I mean, how often do you prepare that at home?). For my appetizer, I chose the cream of spinach soup. It was very hard to let the salade Lyonnaise go, however. I received the waiter's assurance that it was on the lunch menu, so the decision was made easier. My husband, after being informed that the restaurant had recently switched to a new scallop supplier and that they are exceptional, strayed from the menu du jour to the main menu and ordered the sea scallops ($18.50). Listed as Saint Jacques a la Lucie (who's Lucy?), the scallops are grilled and served with a white wine, goat cheese, and rosemary sauce and topped with marinated, sundried tomatoes and roasted garlic. He went with the cream of mushroom soup with sherry to start. Our six-year-old went directly to her favorite: the fruit and cheese platter ($9.50).

From the wine list we chose a Chablis (remember when every jug wine was a Chablis? Now it's all Chardonnay with the occasional sassy Sauvignon Blanc). Never slaves to food fashion, Chez Nous proprietors feature a wine list with offerings from various regions, and their Chablis ($28) is the real thing, from Burgundy. From previous experience, we can vouch for the tastiness of the house wines, too. The wine list says you can ask your waiter for their secret stash of vintages if your checkbook allows. Regular menu offerings range from $14-100, which is plenty rich for our pockets. 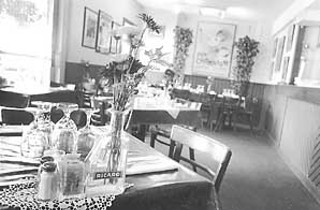 We were promptly given a basket of baguette slices served alongside a slab of European-style butter. So simple, but what in the world is better than great bread and sweet, creamy butter? The crockery bowls of soup arrived soon thereafter.

Similar in style, the soups were absolute essences of their respective vegetables. While I almost always love cream of spinach soup, I must confess it usually tastes like warm stock with cream. But this bowl tasted like spinach. And to call it "smooth" is an understatement. The kitchen must use turbo blenders and miles of cheesecloth to get soups of this velvety texture. There was only a hint of cream, which made the soup surprisingly light. Likewise, the cream of mushroom soup was the consistency of liquid silk and the overwhelmingly highlighted the flavor of the delicate mushroom. Heaven.

Our entrees arrived with the standard accompaniments: seasonal vegetables and pommes dauphines. On this evening that meant green beans and a broiled tomato topped with herbs and garlic. And those incredible potato puffs -- fried balls of puréed potatoes mixed with a choux pastry, these pommes inspire a passionate sense of possessiveness in the most selfless of diners. The tomato's sweetness was enhanced by the broiling, and the herbs and garlic were a gusty complement. Only the green beans suffered by being slightly undercooked.

The veal medallions were sliced and simply arranged on the demi-glace. The most delicately flavored of meats, veal is very easy to overwhelm with too much sauce or fussiness. Not so in this case. Just as the soup was the essence of spinach, here was the essence of veal. Tender with just enough of its delicately flavored sauce, it was a superb execution of this frequently overlooked meat.

The scallops, too, were a sublime delight. I have to admit I was worried about the pungent rosemary and goat cheese completely obliterating the sweet scallops, but they were handled with discretion. Like a dry martini that simply has the word "vermouth" whispered to it, the sauce had the faintest breath of rosemary. And the goat cheese was mild and completely melted to a velvety smoothness, which was a perfect foil for the sweet scallops.

Our daughter, meanwhile, was in heaven with the plate of seasonal cheeses, which on this night included roquefort, brie, port salut, and gruyere. The plate was filled out with a fan of thinly sliced red apples and fresh walnuts. With a refill of baguette slices, she was happy and satisfied while we leisurely finished our bottle of wine.

The portions are sensible in size, which allows diners to indulge in dessert without experiencing gluttonous misery. Our daughter had the chocolate mousse, I opted for the crêpe of the day (fresh fruit with whipped cream in a raspberry coulis), and my husband went for the coffee cheesecake with a chocolate sauce. And each of us thought we were the winner.

The mousse is the light, egg white-leavened variety, but as it is served in the same generous crock as the soup, it is hard for all but the most voracious appetites to finish. The crêpe was simplicity itself, which only served to highlight the chef's understanding of what a crêpe should be. The crêpe is a tender pancake, and its interior of blueberries and strawberries was a good match for the nicely browned casing. The cheesecake was where we left the realm of the light and delicate and entered the serious dessert world. Dense, moist, and rich beyond words, the filling was in a crust of graham crackers remarkably lacking the characteristic grit. Do they put the graham cracker crumbs through a cheesecloth sieve too? Just enough chocolate sauce was drizzled on for the classic coffee/chocolate marriage to occur.

As in bistros in France, the place was packed with people of every age (our daughter wasn't the youngest by a long shot), all of them laughing, drinking, and eating happily. You can tell by the warm embraces from the staff that many of the customers are frequent fliers. And although the restaurant is special because of its fare, it's not formal by any measure. Denim is the fabric of choice of waitstaff and customers alike.

It's been 13 years since our in-law dinner at Chez Nous, and the restaurant hasn't slipped a bit. It has stayed true to its foundations of exquisitely executed simple fare. Chez Nous has been around since 1982. In restaurant years, that's practically a century. We've been married since 1987. That's the kind of stretch you think only your parents and their friends can be old enough to accumulate. May we both be around for anniversaries into the next century.