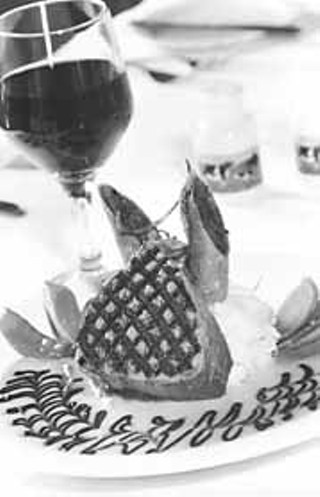 Restaurant fashion can be capricious. It can blow in from nowhere, make a lot of noise, upset dining status quo, and then just as quickly fizzle out. Indeed, restaurants can come and go as quickly as Atlantic coast hurricanes. This is partly due to rapidly shifting ideas about food -- thoughts on what is good, what is tasteful, and what is healthy change almost as quickly as a pair of socks. But besides mere food fashion, clients are notoriously fickle. While they may patronize an establishment when it is trendy, once the scene begins to grow stale they will just as easily forget they ever dined there. A few restaurants, however, seem to be able to transcend the fashion frenzy, not through some clever shtick but through strict adherence to the principles of fine dining. Jean Pierre's Upstairs is one of those restaurants. Jean Pierre's is the kind of place where the waiters won't tell you their names, but where they will wait patiently at the table for you to finish your conversation before telling you about their specials. It's the kind of place where waiters seem to remember effortlessly what each person has ordered. It's the kind of place where they will tactfully whisk away used silverware and replace it with a new utensil before the next course arrives. In short, Jean Pierre's is a restaurant of the old school which emphasizes service over scene, where all employees act like professionals, and where each diner is treated like he or she is the only person in the room. With its quiet, conservative dining room and dimly lit tables, Jean Pierre's has a formal atmosphere that is unique among Austin restaurants. Its only concession to whimsy are the mismatched pairs of vintage salt and pepper shakers that decorate each table, and a certain well-placed champagne bottle.

But while the service and style at Jean Pierre's are quaintly stuffy, the food is surprisingly avant-garde. Since chef Raymond Tatum took over the kitchen at Jean Pierre's a year and a half ago, the cuisine offered at this upscale establishment has undergone a metamorphosis reflecting the varied influences on Chef Tatum's decidedly modern palate. On a recent night, for instance, the menu featured, among other items, a seared snapper with avocado pumpkin seed sauce ($16.75), rack of lamb with Chinese barbecue sauce ($19), tequila beef tenderloin ($18), and a seared chicken breast with roasted garlic cream ($12.75). Appetizers included a Thai coconut lime soup ($3/3.50), crab cakes ($6), fried oysters with carrot and cabbage slaw ($5.75), and a grilled portobello mushroom ($7.50) topped with smoked chicken, duck, gorgonzola, and drizzled with two sauces: a Chinese mustard sauce and a Thai pepper sauce. If the verbal descriptions of these dishes seem a bit baroque, it is because, in fact, Tatum's cuisine is quite showy. He brazenly combines Southwestern foodstuffs with Asian spices and then packages them in a very continental bundle. However, unlike many chefs who tend to overload their creations with trendy ingredients at the expense of overall harmony, somehow Tatum's explosive flavor combinations usually come together successfully to produce a taste that is at once assertive and mild.

The mushroom appetizer, for instance, was grilled until it was just juicy; the slightly moistened smoked chicken and duck practically melted together with the gorgonzola. Two spicy sauces drizzled atop the whole product added a tiny tickle to the back of the tongue. The overall effect was dramatic, like the emotional thrill one feels after a good cry. On another plate, the fried oysters boasted a crispy rice crust that kept the meat inside plump and tender. The Asian-influenced carrot and cabbage slaw -- balanced somewhere between tangy, salty, and sweet -- formed the perfect accompaniment to the rich little meats.

During my most recent visit for dinner, I ordered the pork tenderloin with a light chipotle lime cream sauce ($16.50). Although chipotles can reach the upper end of the Scoville scale, in this dish the citrus of the lime and the soothing effects of the cream turned a potentially nuclear affair into a gentle yet lively sauce whose smoky flavor merely underscored the slightly singed taste of the grilled pork. One of my companions ordered a halibut special ($17) which was marinated in miso, grilled, and then served with a spicy sweet and sour sauce. Although I found the sauce on that dish to be too sweet for my taste, my companion loved it. Meanwhile, I devoured the homemade fried shrimp cake that accompanied his meal.

The specials change frequently, and while some items appear regularly among the changing offerings, in general diners can expect to find something new among them each time they come. One of the more memorable dishes I tried was a luscious fried soft-shell crab with Chinese black beans. My only quibble with the cuisine at Jean Pierre's is that sometimes the execution seems slightly heavy-handed. This was the case with a grilled ribeye steak special topped with gorgonzola butter ($16.25). Generally one of my favorite flavor combinations, I find the pairing of a juicy ribeye steak with the subtle tones of a gorgonzola-infused demi-glace to be one of the most convincing calls to carnivorism I know. However, this ribeye came loaded with melted cheese heaped over the steak. Somehow it seemed like a lazy shortcut. The overall product was not bad, but the flavor was a bit too brash. I felt equally ambivalent about a veal cutlet dish served with a thick lemon basil cream sauce ($15.75). Although it was indeed quite flavorful, I find that a delicate meat like veal is better suited to a lighter sauce. Still, these flaws seemed relatively minor once dinner had ended and we began to assess the merits of the entire meal.

Desserts at Jean Pierre's are essential. Those who know will order a dessert soufflé ($6) in advance of the meal in order to ensure that it arrives on the table hot, airy, and gooey. Delightfully old-fashioned, Jean Pierre's has been offering these individual-sized soufflés since it opened 12 years ago. They remain one of the most popular items on the menu. Different nights present different varieties. The vanilla hazelnut soufflé is sublime, but equally delicious-sounding are the orange, chocolate, almond, and coconut soufflés they prepare. For those who prefer desserts that are a bit more au courant, Jean Pierre's also makes a respectable, tart key lime pie ($3.75) and a creamy creme brulée ($3.50). Other desserts include white chocolate cheesecake ($4.75) and fresh sorbet ($4.25).

I have never had an unpleasant dining experience at Jean Pierre's. Rather, despite a few speed bumps, I have always been pleased with the quality and overall impact of each dish I have tried there. Jean Pierre's formal setting and solid service seem like a refreshing change from the chaos that prevails within some trendier Austin establishments. Owner Jean-Pierre Piaget clearly understands that a successful meal should stimulate not just taste or sight but all five senses simultaneously. For those who prefer a complete dining experience over mere fashion spectacle, Jean Pierre's will happily satisfy.