Imagine a rotund, Hawaiian Emeril Lagasse, with the humorous, flowery, slangy language and the pyrotheatrics, and you've got a good start toward picturing Sam Choy. Chef Choy is considered the most accessible of Hawaii's super-chefs; he has his own cooking show on NBC Hawaii, can often be seen on the TV Food Network, which I call the Emeril Channel (in fact, he's a frequent guest on Emeril's shows), and has produced a series of cookbooks, of which the new Island Flavors is the fifth.

Choy got his start cooking with his father on the big island of Oahu, catering traditional Hawaiian luaus for tourists, in groups of up to 800 people. He went on to become executive chef at Hyatt, Waldorf-Astoria, and Hilton hotels, and opened his first restaurant in 1991. He now has successful restaurants in the Hawaiian Islands, San Diego, and Tokyo, and has been nominated for several James Beard awards. 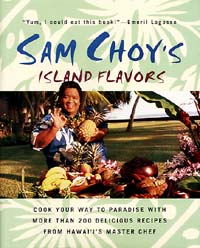 Choy's ethnic melting pot of a family (Chinese-German-Hawaiian) was instrumental in shaping his style of cuisine, which emphasizes the freshest of local ingredients, a balance of sweet, sour, and spicy, and simple cooking methods that yield complex results -- results produced by his system of combining the tastes and textures of a marinade or spice rub with the final sauce, the marriage of the two yielding surprising flavors. The beauty of Choy's cuisine is the simplicity of preparation. Seldom will you encounter a cookbook with such short, easy-to-follow cooking method descriptions after the list of ingredients. One or two sentences is the norm. And the recipes are the kind of dishes that even a novice or neophyte cooking nimrod can produce on the home range, using local ingredients. This cookbook is a blessing for the culinarily challenged. Island Flavors gives the reader numerous classic recipes like meat loaf, potato salad, pot roast, and cheesecake, but with unique Island twists that transform these mundane dishes into tropical wonders. But it is his specialties that appealed to me as a former chef. I prepared several dishes to test the cookbook.

The first was "Lasagna-Style Hibachi Tofu Salad," which is basically a wilted salad of vegetables, sprouts, mushrooms, and greens, layered with slices of tofu marinated in garlic, ginger, onion, cilantro, and sesame oil, and grilled. The whole thing gets dressed with an orange-wasabi vinaigrette, a sesame-soy mayo dressing, and a ginger-cilantro pesto. All of the individual components were very easy to prepare, and the taste was a delightful meld -- seemingly disparate elements that blended perfectly. The second test was "Macadamia Nut Chicken Breasts with Tropical Marinade," which was chicken marinated in soy, sugar, mirin, garlic, and ginger, then crusted with bread crumbs and macadamia nuts, and sautéed. The marmalade was composed of pineapple, papaya, cape gooseberries, mint, and prepared horseradish. Again, the dish was simple to prepare, and the elements swirled together at the end to form a tasty vortex of flavors. Island Flavors covers all of the food category bases, from appetizers, salads, and soups to vegetarian, pastas, desserts, and tropical drinks. It has a very well-put-together index and glossary, with a section on substitutions for some of the more difficult to obtain, esoteric ingredients. The one complaint I have to air about the book is Choy's cavalier attitude toward ocean conservation, especially since he talks with reverence about the rapid decline of the deep-water shrimp population and his love of blue-water fishing. Yet the cookbook is chock-full of recipes for swordfish and marlin, both pelagic species in serious danger (there is a national campaign currently under way to boycott the use of swordfish in restaurants -- Central Market, take note). In one section, Choy brags about his Kona restaurant using 1,000 pounds of marlin weekly for a single appetizer he makes there.

If you're looking for a cookbook that will add a fresh, unique, and tropical twist to your daily cooking grind, Island Flavors is the one for you -- and you won't need to be a classically trained chef to cook these dishes; the ability to read should suffice. -- Mick Vann