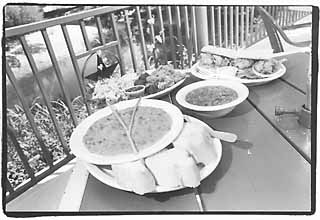 In Louisiana culture, there's a mostly male social institution and real estate phenomenon commonly known as "The Camp." Somewhere between a remote house trailer and ice-fishing shack, The Camp sits at least 30 minutes from civilization on some body of water (river, lake, or mostly liquid marsh) and consists of a simple shack, a boat dock, and maybe a few bunk beds. During any calendar season, The Camp is used for extended weekend hunting or fishing trips by groups of men looking to eat well, "talk trash," and escape anything resembling civilization. When you're "out at The Camp," you can't be reached by phone, you eat whatever's been hooked, netted, or bagged that day, and -- most importantly -- normal household rules don't apply.

Anyone who's ever frequented a Louisiana Camp will immediately feel comfortable inside the Shoal Creek Saloon. Situated near the now-congested junction of Sixth and Lamar, the Saloon captures the atmosphere of these informal gathering places in a way that loop-bound Cajun franchises can only dream of. The atmosphere (set off by a well-weathered, raw wood interior and extended shuffleboard table) has the best elements of a neighborhood sports bar and routinely attracts homesick fans of LSU and New Orleans Saints football.

In addition to the usual suspects of Texas bar food -- burgers, nachos, fries, and stuffed jalapeños -- the Saloon's kitchen also offers a range of simple Cajun dishes from duck gumbo to crawfish etouffee and fried oysters. After passing the sign one too many times, we just had to stop and try it.

The House Gumbo ($3.95 cup, $6.95 bowl) is flavored with a rich, dark roux and stands up to any good hunting camp version I've had. It's listed on the menu as a mixture of "smoked duck, chicken, and sausage," which usually implies a minimum 3:1 chicken-to-duck ratio in favor of the cheaper bird. But our cup was crowded with chunks of savory duck breast and slices of well-cooked (non-slimy) okra. Even though summertime isn't the peak season for the hearty soup/stew, this barroom classic was a pleasant discovery for the colder months.

Another mainstay of landlocked Cajun restaurants is jambalaya -- a cooked-rice concoction analogous to Spanish paella -- mainly because it can be made using common land-based ingredients (chicken and pork sausage). The Saloon's cooks take a different approach by offering a Crawfish Jambalaya ($6.95), which showcases south Louisiana's national crustacean and comes in big ol' portions. The texture of the dish had an almost creamy texture (bordering on risotto) and was thoroughly studded with the tender nuggets of crawfish tail meat. There's no skimping on the good stuff.

Any fish camp worth its salt can turn out a perfectly fried fish, and this Austin equivalent does a great job with its deep fried offerings. The catfish fillets (four-piece plate, $5.95) were crunchy with cornmeal and perfectly peppered. Unfortunately, all the pieces in our basket came from the thinner side of the fish and lacked overall meatiness. (No real complaints here -- that's just the luck of the draw, but a few thick pieces in the mix would have been nice.) The plate came with a few notable sides and condiments -- well-spiced hush puppies, an amazing garlic-spiked cole slaw, and homemade tartar and cocktail sauces.

The Fried Shrimp (four-piece plate, $5.95) were damn near perfect: big, butterflied beauties with a batter coating as delicate as fine Japanese tempura. The mark of a good fryer is the ability to stop before the fresh shrimp get rubbery -- and these were perfectly still moist on the inside without a hint of elasticity. Another shrimp-related house specialty didn't fare quite as well. The BBQ Shrimp ($9.50) were definitely more soupy than rich and could have used an extra shot of butter and a bit less broth.

But all in all, the Shoal Creek Saloon is a more than suitable local substitute for The Camp -- especially since you'll eliminate the hassle of Houston traffic in the bargain.