Stuffed to the Gills 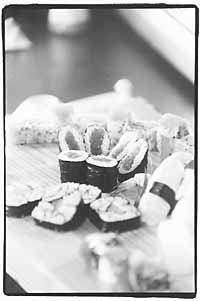 For want of a better marker, Korea Garden is directly across North Lamar from the Yellow Rose. Not that I've ever frequented the popular strip joint (though I probably wouldn't turn down a VIP pass if they sent me one), but most Austinites know its location. Korea Garden is housed in a nondescript Quonset hut that gives no indication of the pleasant surroundings found within. Light but warm wood dominates the interior, giving the spot a cozy, Asian feel. The sushi bar, run by a genial gentleman who certainly knows his way around a finely sharpened sushi blade, anchors the center of the restaurant. The north side features five divided private tables with sunken pits underneath for your legs (no shoes allowed), while the south side has conventional seating.

Lunch specials, which are offered Monday through Friday, 11am-2:30pm, are the deal of the millennium. My supervisor and best girlfriend Dena and I arrived right at noon to find a moderate crowd of diners. The lunch special menu features a good selection of popular Korean fare, including an assortment of bulgogis, entree-style soups, and noodles at very reasonable prices. We settled on pork bulgogi ($4.95), chicken bulgogi ($4.95), and a bowl of spicy beef soup with vegetables and noodles ($5.95). In a matter of minutes, our plates arrived amidst a riot of aromas and vibrant color. The large lacquered red compartmentalized trays held a cornucopia of treats to accompany the entree. First came cups of rich, aromatic miso soup with tofu. The plates were paired with a delightfully spicy kimchi (fermented, pickled Napa cabbage), two pieces of vegetable nori sushi, sweet and sour shredded daikon pickle, blanched broccoli with sesame oil, lightly pickled mung bean sprouts, and sweet soy-glazed potatoes. Two mounds of steaming rice sat next to the pork bulgogi, which was rich, spicy, and redolent of garlic and scallion. Dena's chicken was mixed with shredded scallion and vegetables, and both tasted incredible. The spicy beef soup (Yuk-Gae Jang) had an intensely beef-flavored stock so red that we were momentarily afraid of the heat level. But one taste and we fell in love with the large bowl of shredded beef with julienned vegetables, greens, garlic, and noodles. It was rich and piquant and very satisfying. It too came with the assorted vegetables, but we declined their offer since we already had two platefuls to enjoy.

I went back for dinner with a friend who fancies herself a sushi fanatic. We would put Korea Garden to the test and try a medley of their 57 sushi/sashimi offerings. Korea Garden runs a sushi happy hour Monday through Thursday, 5-7pm, with items on the sushi menu marked with an asterisk priced at $1 per pair -- one hell of a deal for sushi freaks in this town. It was a buzzing, bustling night with a good crowd of predominately Korean diners, and a young, hip-looking waitstaff. We studied the menu, made our selections, and settled in for the requisite wait. After a non-terminal period of time, a huge platter of sushi arrived. It was an explosion of color, with the individual pieces artfully prepared. The acid test for my companion was the yellowtail (hamachi in Japanese). It was silken and buttery and unfailingly fresh. The tuna (maguro) was prime, soft, deep red, and rich. But a surprising standout was the Spicy Tuna Handroll, which was like a spicy tuna tartare rolled in nori and flavored with chile, sesame oil, and cucumber -- absolutely incredible. My acid test was the sea eel (anago), for which I've always had a soft spot. Korea Garden's rendition was first-rate; I would put it right up there with the version served at Niki's Tokyo Inn in San Antonio. It was golden red and slathered with a sweet soy-ginger glaze that made it melt in the mouth. The California rolls, salmon skin rolls, and shrimp rolls were all first-rate. My partner has a fondness for smelt roe and salmon roe sushi, so we ordered those as well. She enjoyed them immensely, but being the fisherman that I am, fish eggs (even Beluga caviar) to me have always been akin to bait -- not meant for human consumption, but something to catch dinner with.

We ordered an appetizer of Kimchi Pancake ($4.95), which arrived promptly. A huge platter covered with a spicy pancake filled with garlic, scallion, and spicy kimchi. I loved it, but we couldn't eat it all, due to its enormity. Luckily we never received our order of Broiled Yellow Fish ($10.95), even though two different waiters came by to see if we had ordered and received it on three different occasions. We were stuffed to the gills and on the verge of bursting. We suffered the fate of all of the rest of the room: a discombobulated kitchen and harried staff. Forty-four very demanding Korean businessmen had shown up with 10 minutes' notice and had totally capitalized the place. In short, the waiters went weedy on us. Major service glitch aside, all the dishes I had at Korea Garden were of the highest caliber, the waitstaff was knowledgeable and efficient, and the space is deceptively tasteful and comfortable. I will go back to test and taste my way through the menu (especially if I get that VIP pass from across the street).