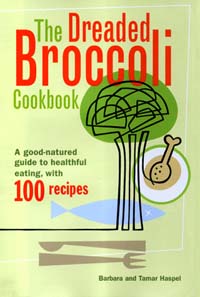 A familiar rant about food writing is that it lacks voice, personality, charisma, oomph. It is either academically dry or carries the annoying pomp of a cheerleader. Health food writers, especially, are notoriously downright dull, dull, dull. We imagine them awful dinner companions, perfect proponents of their "I love celery sticks!" ways. To their weary supplications, The Dreaded Broccoli Coobook is a welcome response.

In Dreaded Broccoli, we get a lift from not one distinct, powerful, honest, and humorous voice, but two. On all topics, but especially food, the Haspels (mother and daughter) are refreshingly opinionated, decidedly New York. Their writing style is anecdotal, their wit often self-effacing, and their cooking plainly irreverent. Says Tamar, "The cooking we do is improvisational and imprecise. We invent combinations and substitute ingredients and vary quantities not just with equanimity but with glee." Now, these are the folks to chow down with.

But if this gives the impression that they care not for style or taste, it is short-sighted. True, Dreaded Broccoli concerns itself little with the rules of classic instruction, if only because the Haspels have your best interest in mind. And while Dreaded Broccoli still relies on staples of a gourmet kitchen, like homemade stock, it avoids needless futzing about the kitchen, worrying more about giving a soup enough flavor than about whether a food processor will give you a proper cut.

The Dreaded Broccoli Cookbook is a no-nonsense thinking and eating person's guide to low-fat cooking. It teaches how to cook by reasoning and common sense, not with Larousse's taxonomy of food stuffs. But before you accuse the authors of improper schooling, note that they have done their homework. When they suggest playing around with the ratios of onions to carrots to celery in a soup base, it's because they've induced, from a careful read of the master teachers, that proportions of each ingredient varies even from one classic recipe to the next. With such reasoning, the Haspels conclude that many cooking rules, inconsistent as they are from the start, may be minded, but perhaps only when the mood, budget, or inspiration strikes.

Dreaded Broccoli, surely, has its own set of guidelines, though, for living a healthy food life. The Haspels do not pretend to rewrite the rules of cooking, but simply to extract them from examples of food that works and present them in ways we can't help but understand. Tamar, for instance, spends a chapter discussing the basics of sauces and soups, but the few recipes included in this chapter serve more as guides for making soup than as strict formulas for the same. What makes this book different, and exceptional, is that it attempts, with as little discomfort and arrogance as you can imagine, to teach you how to cook. And it does this with only 100 recipes, no pictures, and almost 300 pages of text.

Even the most zealous cook among us relies a mite too heavily on recipes. Many of us cook smart food from smart chefs, but we remain rather stupid about the essential goings-on in the pot, following rote commands in mindless fashion. In general, many of us have duped ourselves into thinking we can cook good food, when we wouldn't know how to cook ourselves out of a can if we weren't told. The Haspels are indeed wise to the human psyche. They know the burden of low-fat diets and they readily voice cultural skepticism of low-fat food. They know what we'll whine about (making stocks) and what we simply can't forgive them for (cutting back our meat). But they eventually win us over with simple reason, sharp humor, and enticing recipes. The Dreaded Broccoli Cookbook is not about perfecting techniques or entertaining for 20. It's about teaching common sense culinary principles for cooking easy food for everyday good health.

Still, Dreaded Broccoli is interested in flavor, and in health and enjoyment. "Dinner shouldn't be a harsh reminder of the food you can't eat. It should be a celebration of the food you can." Like Cucumber Yogurt Soup, a perfectly balanced, albeit somewhat chalky, rendition of a generally fat-soaked soup. Also, like Buffalo Stew, Cornmeal Griddle Cakes, Chocolate Milk, and Roasted Pepper Soup. But even these recipes aren't scripted for the special occasion. They are for daily wear, like a comfy sweater and worn-in jeans. The Haspels care about your time and taste, so they enhance their recipes with plenty of stocks, herbs, and spices, goat cheese, yogurt cheese, and buttermilk, wines, and bean broth, and, where sensible, they rely on help from a food processor and non-stick pan. They are careful about consuming excess salt, the pillar (pardon the pun) of taste, where their call for fresh ingredients often compensates for its otherwise egregious use. I did, however, find myself forced into its liberal use with a Cold Tomato and Seafood Salad, whose simply steamed shellfish needed sufficient enhancement after the juice from fresh tomatoes diluted its rice wine-lime-ginger marinade. But that seafood salad's leftovers were to provide me with my first test in the lesson of "pantry momentum" -- the Dreaded Broccoli term for that which enables you to whip up a meal as a matter of routine, out of habit, with little stress and ego kill. It also spurred me to practice "Incatenata": the reuse of foods (in this case, the steaming water and extra marinade from the shellfish) to create "a chain of meals" -- I made a great seafood risotto the next night. "The whole point is to make the most of low-fat foods without succumbing to butter or cream," say the Haspels. And without giving in to artificial products that substitute for fat in theory but not in kind.

This book isn't in vogue with the current push for protein or with the current indulgence in fancy food. Much text is devoted to review knowledge about working with the basics (with a big bully for vegetables). Its references to Dean Ornish might even seem dated. And it's not necessarily the book you go to when you want a razzle-dazzle dinner for two (although I could get intimate with the Potato and Mushroom Pie with Polenta Crust). But its eminently practical approach might just herald the next culinary trend of unassuming, sensible cooking. Rejoice! Home cooking might be honorably saved.-- Ronna Welsh