Please to the Table: From Russia, With Love 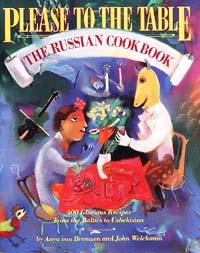 The first time I went to the former Soviet Union, to Kiev and to the Crimea, I steeled myself for what I imagined to be a culinary wasteland. Brought up on Cold War images of endless food lines set against spartan, gray buildings, I expected the cuisine there to be unpalatably bland. I was wrong. Alighting from the plane into a sunny summer day, I was greeted with a three-course meal of Ukrainian Borscht, cured roasted meat, and delicate cheese-and-jam blini. From that moment, the eating never stopped. I remember the fruit trees there, dripping with apricots, plums, cherries, figs, and olives. I was stunned to discover artichoke plants, rosemary, and arugula growing practically wild by the side of the road. In the cities, food vendors installed themselves on every corner, selling rice pilaf, little fried pastries, sausages, and dumplings. Meanwhile, the markets were crammed with foods both locally produced and imported. In terms of cuisine, I quickly discovered that an incredible amount of cultural diversity characterized the foods we ate; food there involved not just stewed beets, cabbage, and potatoes, but colorful, aromatic spices from Central Asia, nuts and olives from across the Black Sea, and foodways representing the most distant folds of the colonial sprawl that was once the Soviet Union. My strongest impressions of the three summers I spent in the Crimea inevitably involve the food. After my first trip, I reluctantly returned home, a pious devotee to Russian food.

Back in Austin, I began to look for a cookbook that would teach me the secrets of this relatively unknown cuisine. I did not have to look far. Anya Von Bremzen's 1990 cookbook, Please to the Table, offers the definitive word on Russian cooking. Bremzen, whose culinary sensibilities gestated in the ebb and flow of Moscow's Central Market, is strongly influenced by the food traditions of the many smaller nations that once comprised the Soviet Union. And although the Soviet Union no longer exists, Russian cooking still bears the stamp of the more exotic cuisines of Central Asia and the Middle East. Indeed, Russian cooking today, much like American cooking, is largely a pastiche, boldly borrowing not only from the Central Asian traditions, but also from French, Polish, and German cookery. Bremzen showcases them all in a cookbook in which recipes for Mushroom Caviar stand beside Eggplant Stuffed With Walnuts, classic Siberian Pelmeni, and the quintessential Russian Shchi.

In the margins between the recipes, she offers tidbits of food lore, culinary history, and special menu combinations that might typify a Russian meal for a particular season or special occasion. Through her explanatory notes, Bremzen engagingly shows the influences behind many classic dishes. For instance, during the age of Catherine the Great, Russian chefs borrowed heavily from French cuisine; however, they adapted the style to their own locally available foodstuffs. So while French cooks used butter, wine, shallots, and tarragon, Slavic chefs substituted goose fat, mushrooms, sour cream, and dill. The result: beautifully blended dishes such as Fish With Mushrooms and Crabmeat in Ramekins, or Turkey Breast With Apple and Tomato Purée. The same hybridization applies to Central Asian-inspired Russian dishes such as Plov -- essentially just rice pilaf-- or Kharcho, originally a Georgian beef and sour plum stew which, through numerous evolutions, has become a favorite Russian meal with lamb, tamarind, and tomatoes.

Each recipe is prefaced by a short introduction about where the dish originates. Then, the recipes themselves follow, with precise ingredient lists and step-by-step instructions about how to prepare the dish. One night I tried the chicken and veal Croquettes Pozharsky. (According to legend, these delicate little patties were a favorite of Alexander Pushkin.) They emerged from my frying pan crispy and golden, scented with dill and Madeira. Bremzen's recipe for Braised Sauerkraut With Bacon and Wild Mushrooms formed the perfect accompaniment. The mushrooms and Madeira wine called for in the ingredients gave the sauerkraut a velvety, almost buttery flavor. I have never tasted a superior cabbage dish.

Although Bremzen's directions are about as comprehensive as one could wish, I nevertheless offer a word of caution to the casual cook. Many of her recipes are highly complex and require several days advance preparation. Their authenticity, however, makes it all worth it in the end. On the night I prepared the Ukrainian Borscht (which contains more meat and cabbage and less beet than the borscht we Americans usually imagine), it took me several hours to put together the meat stock, the meat, and all the vegetables required for the meal. But when my husband and I sat down to eat it, one bite sent me soaring across the Atlantic, back to the shores of the Black Sea, where Ukrainian Borscht is to the local soul what chips and salsa are to the Austin palate: just good comfort food.

Generally speaking, there is something for every one in this cookbook. With the book weighing in at 650 pages, it is clear that Bremzen has done her research. As she herself points out, it's not necessary to follow the directions for each recipe to the letter, but rather to use the recipes as inspirations to create individual variations of this multifaceted cuisine. I have used Please to the Table as inspiration for several years now, and each time I open it I find something new to try. Priyatnovo appetita!-- Rachel Feit