A Cowboy in the Kitchen: Recipes from Reata and Texas West of the Pecos 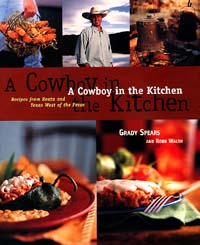 The aura of Edna Ferber's epic Texas novel Giant loomed large over West Texas in the 1950s. Everyone had an opinion about her depiction of the struggle between the established ranching economy and the emerging oil industry personified in the clash of larger-than-life cattle baron Bick Benedict and the scrappy wildcatter Jett Rink. When Hollywood came to the Trans-Pecos to capture the story of the fabled Reata ranch on film, a rapidly vanishing element of Texas culture was glamorously preserved forever. Texas west of the Pecos Riveris one of the few places where large-scale cattle ranching is still practiced profitably. For the last few years, cattle ranchers, cowboys, movie crews, and tourists alike have dined on the cowboy cuisine at restaurants in Alpine and Fort Worth. According to the preface to this new cookbook, cattleman-turned-chef Grady Spears and his partner, millionaire rancher Al Micallef, wanted their restaurants to play a part in preserving the culture and the cuisine of the Old West. That's why they named the restaurants Reata, "after the mythical ranch in Giant and the cattle culture it represented."

Grady Spears is quick to admit that he never set out to become a chef. "Back when I was punching cows, if you'd told me I was going to be a chef someday, I would have doubled over with laughter and fallen off my horse," he says in the introduction to his cookbook. He was managing a restaurant at the Gage Hotel in Marathon when the cook walked out in a fit of temper and Spears was pressed into service on the (kitchen) range. He found he had a natural affinity for cooking and his no-frills cowboy chow at the Gage began to develop a loyal following. When he left the Gage and partnered up with Micallef, they chose an old ranch house in Alpine for their first location and decorated it with genuine Old West artifacts and Micallef's CF brand. The popularity of the authentic West Texas cowboy cuisine at Reata took off like a herd spooked by lightning and Grady Spears was soon a nine-year "overnight success."

A sleek, upscale version of Reata atop a bank building in Fort Worth soon followed the Alpine restaurant, and the partners will open a third location on swanky Rodeo Drive in Los Angeles later this year. The release of a cookbook was also a natural step in the business process and A Cowboy in the Kitchen has generated plenty of attention for the Reata company. I caught up with the busy Spears for a phone interview between a California trip that included several radio interviews and a visit to Fort Worth from a TV Food Network film crew. The busy young man is very honest about the fact that he's not a chef in the classic sense of the job and he willingly credits the experienced West Texas ranch cooks and the team of culinary school-trained chefs at Reata-Fort Worth for the many contributions and refinements they've made to his cooking. His manner is relaxed and open, and it occurs to me that his lack of culinary pretension and his devotion to authenticity are likely what makes Spears' restaurants so successful. I've never eaten at Reata, but I've prepared several dishes from the cookbook in recent weeks. I'm now an ardent fan of his hearty, flavorful cowboyfare. You see, I grew up in West Texas and all the men on one side of my family are cattlemen. I could enthusiastically serve Spears' recipes to any of them with no fear of reprimand. I could also take a copy of A Cowboy in the Kitchen anywhere in the world and present it proudly as an authentic representation of the cuisine of the country where I grew up. This food is the genuine article.

Perhaps one of the most important reasons that Grady Spears' food is so authentic to West Texas is Alpine's remote location. Out in the Trans-Pecos, the Reata staff didn't have access to exotic produce or fancy gourmet items so they were never tempted by foie gras, caviar, or truffles. Spears and his cooks were forced to make do with what was available in the area, so he began cultivating local growers and producers, buying quality beef from one ranch, handmade goat cheese from someone else, and encouraging local farmers to grow peppers, beans, and tomatoes to his specification. When Spears visited trendy restaurants in Santa Fe, he found that he'd accidentally tapped into the hottest restaurant trend going. Only he'd been doing business with local growers and purveyors because he'd had no other option. I asked him if moving into Fort Worth or Los Angeles would change his menu any because so-called gourmet ingredients would be more readily available. "Not at all. This is all I know how to do," he told me adamantly. "We're going to stay true to what we've always done."

Staying true to the cowboy cuisine of West Texas doesn't mean just beef, however. The cookbook features tasty recipes for game birds and seafood, one-pot meals perfect for Dutch oven cooking, and some of the best biscuits and cracked pepper gravy you'll ever sink your teeth into. Spears and his support staff of talented chefs have managed to develop plenty of enticing recipes using the indigenous foodstuffs of West Texas and therein lies the true value of the cookbook. Try the Buttermilk-Battered 1015 Onion Rings (p. 111) when the sweet Texas onions show up at your local farmer's market this year, braise some cabbage in Texas Port (p. 124), or serve a mess of Bock- battered Quail with Cider Adobo (p.58) and Buttermilk Pie With Rum-Soaked Raisins (p. 176) to your cowhands, and everybody will be pleased, I promise you.

When I was reading A Cowboy in the Kitchen, it seemed to me that author Robb Walsh must have completely captured Grady Spears' voice and persona. Now that I've finally spoken with Spears, I know that's true. Using Spears' voice and experiences, Walsh's words skillfully depict the West Texas cowboy culture for which everyone involved with Reata restaurants has such an abiding respect. The photographs that illustrate the book are exquisite as well, and it's no wonder. James Evans' Western photography is very well respected in Texas and his location shots of the Trans-Pecos cattle country bring it vividly to life. Dick Patrick's enticing food shots prove that food doesn't have to be "gussied up" to make your mouth water.

According to Grady, A Cowboy in the Kitchen has already gone into its second printing and his next book from Ten Speed should be out in the fall. Cowboy Cocktails will feature drink recipes interspersed with cowboy poetry, another established Western art. A PBS series with a companion cookbook is in the works. As the cowboys would say, Grady's got plenty of irons in the fire. Hearing him talk about sticking with what he knows, I couldn't help but recall a scene in Giant where wildcatter Jett Rink stubbornly refuses to sell the Benedict clan the seemingly useless little piece of land bequeathed to him in old Luz Benedict's will. "I don't know but what it jest might be a good idea to gamble along with ol' Madama and jest keep what she give me," Jett told them. I'd bet that as long as Grady Spears sticks with what he knows, his possibilities are as limitless as the Trans-Pecos horizon. --V.B.W.