Foods From the Holy Land 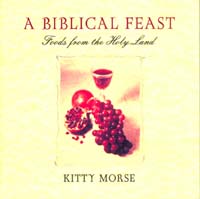 Eating. It is at once the root of human misery and the cup of human salvation. In the Judeo-Christian tradition, the fall from grace begins with a single event: Adam and Eve eat from the Tree of Knowledge and thus become aware of their own bodies and their own awkward, embarrassed mortality. But just as one bite causes the expulsion from Eden, so too does another lead to salvation. For many branches of Christianity, redemption is achieved through eating the bread that symbolizes the body of Christ. For Jews, no holiday galvanizes the community like Passover, which commemorates the deliverance from slavery in Egypt with a feast. In the same spirit, on the most sacred of all Jewish holidays, Yom Kippur, spiritual atonement comes through denial of the food which our mortal bodies need to maintain life. Indeed, the Bible of Judeo-Christian religions overflows with episodes involving feasts, fasting, and famine because the ancients recognized the importance of food not only as nourishment, but also as part of the process leading to true spirituality.

In a new cookbook, author Kitty Morse finds inspiration in the very foods that formed the cornerstone of these enduring spiritual traditions. A Biblical Feast: Foods From the Holy Land features recipes that Morse has collected from the Near East-Mediterranean region presented in a context that allows readers to appreciate each dish's place in Biblical history. Each entry begins with a passage from the Bible that acts as a reference point for the dish being showcased. Morse then provides a knowledgeable introduction which adds to our understanding of ancient food traditions. Then comes the recipe for the dish. A recipe for fresh fava beans with olive oil and garlic, for instance, is prefaced by a short paragraph which tells us about the archeological evidence for favas in charred cooking remains from 4,500 years ago. Similarly, a recipe for Leek Dip follows a passage from Numbers 11:5: "We remember the fish, which we did eat in Egypt freely: the cucumbers, and the lemons, and the leeks, and the onion and the garlic." Morse then embarks on a short discussion of leeks, linking them to historical foodways.

The foods that ancient peoples ate were simple, she tells us; consequently, the recipes in ABiblical Feast are as well. Olives, milk, honey, pomegranates, apricots, leeks, cucumbers, wheat, and figs form the building blocks for an uncomplicated yet timeless cuisine. Lamb rubbed with cumin, lentil stew with mustard greens, barley and mint, and an unusual dried fruit Harosset (a fruit and nut mixture traditionally eaten at Passover) all require only a handful of ingredients and very little work time. One recipe that I tried -- grilled tilapia marinated in pomegranate honey -- required little advance preparation to make it turn out superbly. The sweet-sour-salty flavor of the pomegranate marinade mated perfectly with the light, flaky texture of the fish. Another dish I tried, dilled cucumbers with olives and goat cheese, made an elegant salad with a cool, summer flavor. On the other hand, the recipe for squash with capers and mint did not suit my taste. While the people of the Bible may have relished this dish, I quickly realized that mashed, boiled squash is not the sort of thing that's as appealing to adult people these days as it may be to infants. I vowed that the next time I tried the recipe, I would modernize the preparation and sauté the squash in olive oil instead.

The book itself is slickly packaged with simple yet elegant food photos interspersed throughout the text. Nevertheless, people who like to gaze at recipe photos will be disappointed; ABiblical Feast leaves the recipe presentations entirely to the reader's imagination. This book is less for the fashionable foodie who lusts for creative cuisine ideas than it is for the food historian who prefers instead to devour the stuff of history and tradition. The recipes that Morse offers are a little too basic. Yet, while this book would not necessarily satisfy a new-food warrior, it would serve as a perfect introduction for someone who knows very little about cooking. The author devotes the first 20 pages to food definitions, and the last five pages supply a lesson in basic cooking techniques. Most of the recipes are uncomplicated and easy to prepare. Fundamentally though, A BiblicalFeast is more than a standard how-to book. Part history lesson and part cookbook, it weaves together stories from the Bible with exhaustive definitions, explanations and directions not only about how to cook, but also how to understand the foods people ate. ABiblical Feast reminds us that the Bible is not just a holy text. It is also an ethno-historical text that gives modern readers a window onto the past. --Rachel J. Feit