The Sultan's Kitchen: A Turkish Cookbook 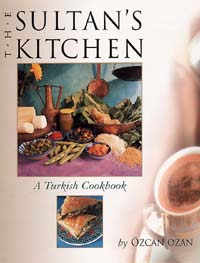 Creamy eggplant with tomato and yogurt sauce ... puréed pumpkin with coriander and brown sugar. After I whined to my editor for the thousandth time that I'm in a perpetual search of an Afghani cookbook so I can re-create these dishes at home, she handed me The Sultan's Kitchen by Özcan Ozan. Turkey was as close as we could come geographically, but that's not saying much. And the food seemed as if it must be worlds away.

It certainly looked intriguing, though. While that has something to do with the richly toned, stunningly composed photos by Carl Tremblay, it also involves the host of fresh, unusual food combinations. The book also includes an informative rundown of Turkish ingredients, suggestions for menu pairings, and an explanation of where some Turkish influences come from.

As in Mediterranean cooking, garlic and olive oil are prevalent, as are eggplant, grape leaves, flatbread, lamb, and tangy cheeses such as feta. But Turkey's proximity to the Middle East, the Russian republics, and Eastern Europe yields influences in Ozan's recipes as well, which are a sampling of those used in his Boston restaurant (also called the Sultan's Kitchen).

To learn more about the cuisine and test the recipes and ease of ingredients, we attempted to prepare a few dishes from the Meze, or appetizer, portion of the book: his version of Circassian Chicken, Fried Eggplant and Green Peppers with Yogurt-Garlic and Tomato Sauces, and Zerde, a saffron pudding.

With more preparation time, the book would be easier to use. But looking for pomegranate seeds and rosewater on a Sunday night proved frustrating, although it would be easy to buy these items at more specialized local stores, such as Phoenicia Bakery, Medina Market, or MGM Indian Foods. Therefore we had to forgo the saffron pudding, which also included pistachios, currants, pignoli, and rosewater.

Circassian chicken is a classic Turkish/ Georgian preparation, typically eaten on special occasions. Chicken is simmered in stock, then shredded. Then the stock is added to white bread, lots of sweet, crushed walnuts, onion, garlic, cayenne, and a colossal amount of paprika. Then chicken is folded into the resulting paste and garnished with parsley, walnut oil, and more paprika. The flavor combinations, though unusual, are instantly appealing. Because you can make it ahead of time and it has such an attractive presentation, it's easy to see why the dish is served at special occasions. Our only problems were that the dish required a lot of salt to taste and that Ozan didn't specify whether the Circassian Chicken was to be eaten warm or cold. (As it turns out, either is fine.)

For the eggplant, we needed to substitute New Mexican green chile for the requested Italian green peppers, which didn't work too well because they seemed too thick-skinned. Otherwise, the dish required peeling the eggplant in alternate strips, then soaking it in salt water to dissipate possible bitterness and to plump it up so it wouldn't absorb as much oil. The eggplant itself required less than two minutes of frying in some dangerously hot oil and was ready to be eaten. A creamy yogurt-and-garlic garnish sauce was easy to prepare, as was a light tomato-and-garlic sauce (garlic was a prevalent theme in the meal.)

Time aside, neither dish was difficult, but as is the case with most new recipes, the preparation times for both the chicken and the eggplant were considerable; we started prepping at about 7:30pm and sat down to dinner more than two hours later.

But even bleary-eyed from paprika fumes and fatigue at 10pm, it was easy to recognize that what we had before us was some of the best eggplant I've ever tasted, the bite of the skin completing the flavor equation with its components of heat, cream, and acid. And the bittersweet Circassian Chicken was a testament to what we can learn by plunging into an unknown culture, if only with our tongues.