1. Unprecedented growth in the Austin restaurant market. All the new Austinites have to eat somewhere, and throughout the year new eateries opened at breakneck speed.

2. Severe drought damages crops at area farms and gardens. Months with no rain and a devastating string of 100+-degree days left many area crops shriveled in the dry, parched earth. However, a very rainy fall and spring-like temperatures in December meant that local farmers had fresh basil and tomatoes until a week before Christmas. There's nothing like Texas weather.

3. The employment market. Chef, pastry chef, line cook, prep cook, and baker's jobs are going begging in Austin due to the explosion in the restaurant market and very low unemployment numbers.

6. Local chefs strike out on their own. After years of doing good work in operations run by others, native sons Hoover Alexander and Kevin Williamson created their own restaurants in 1998. Williamson opened Ella's with partners Sharon Gerhardt and Darryl Sneary, while Alexander launched Hoover's Cooking with the support of investment partners.

7. Asian restaurants become the fastest growing segment of the local market. As of 1998, Austin is home to an incredibly diverse selection of Asian restaurants, everything from Indonesian (Java Noodles) to a Vietnamese bakery (Ba Le) to Chinese BBQ (Din Ho), plus more good bowls of pho than you can shake a noodle at.

9. Local opportunities for wine education blossoming. So many choices, so little time. These days, there are wine tastings at liquor stores and grocery stores, vintner dinners at restaurants, chef luncheons at area wineries, and classes on pairing wines and foods everywhere you look. Salud!

by Virginia B. Wood

1. High Rock Ranch Peaches. The very essence of what peaches should be, these luscious tree-ripened beauties were the saving grace of a punishing hot summer.

2. Haagen Daz Dulce de Leche Ice Cream. This new flavor -- initially intended only for largely Hispanic markets -- proved so popular that it's now the company's second best-selling flavor nationwide. As much of it as I served in 1998, I'm not surprised.

3. Anitra con Fichi e Porto at Vespaio. My friend Nicole said it best, "Other chefs wish they could cook duck that's this good!" The first among equals, Alan Lazarus' crispy boneless duck with port-soaked figs and red currant sauce is just divine. So are the pasta pouches filled with butternut squash with browned butter and sage, so are the rich soups, the antipasti, and on and on and on.

4. Omelettes at Blair House. I thought innkeeper Jonnie Stansbury's miraculous salad with Amish gorgonzola and champagne grapes was the most amazing thing I'd eaten at Blair House until the ethereal cloud of eggs wrapped around fresh garden ratatouille settled gently on the breakfast table. It was quite simply the best omelette I've ever eaten in my life.

5. Boggy Creek Farm Smoke-Dried Tomatoes. Made even more precious because the summer's fresh tomato crop fell victim to the killer drought, Larry Butler's smoldering wonders are a great addition to eggs, salads, breads, dips, marinades, or anything else you can think of that demands a tomato.

6. Herbed Polenta Corn Cakes at Si Bon. These tasty little disks with a thin, crisp exterior and creamy center were my favorite side dish all year long, good enough to make a whole meal themselves.

8. Polenta Poblano with fresh basil and cilantro. Miguel Ravago created this marvelous dish for a catering gig and served it at the bon voyage party for a mutual friend. We all ate seconds, then thirds, then demanded to take the rest home for breakfast.

Pulled Pork Sandwiches at Jo's. I found these warm, sweet-tangy handfuls of sandwich to be an absolute lifesaver during the busy holiday season. When they start delivering room service for the San Jose Motel, maybe they'll consider coming to my house just around the corner.

Mango Souffle with Dark Chocolate Sauce at Si Bon. A divine, delicate ending to a special dinner, worth every penny of its $10 price tag.

Assorted Chocolate Truffles from Zoot. Pastry chef Mary Perna's elegant selection of handmade chocolate truffles were the most delicious Christmas gift that arrived at my house in 1998.

Mussels in garlic curry sauce at the Clay Pit. These were the star of an enormous family-style meal that friends and I enjoyed here during the last week of the year. We'll be back.

YEAR OF THE TIGER KUDOS

2. The explosive growth of cuisine-related sites on the World Wide Web. Cyber-chefs' recipe compilations, restaurant menus from around the world, instant restaurant reviews -- all available at the touch of a button.

3. The release of The Elephant Walk Cookbook by Nyepî De Montiero. The world's first Cambodian cookbook in English -- priceless.

4. The shared-parking-lot dynamic duo of Ba Le Vietnamese Bakery and SaigonMarket and Deli. Inexpensive, homestyle Vietnamese fare with a flourish.

5. The opening of Din Ho Chinese BBQ. It breaks the mold of the mundane, refined Hong Kong/Canton style.

8. The scintillating soups and seafood specials at Formosa. Foo fusion at its finest.

9. The opening of Vespaio on South Congress Austin leaps and lurches ever closer to real Italian provencial cuisine.

Three I couldn't do without: the awe-inspiring chip/salsa tower at Evita's Botanitas (still the best in town), home cookin' at Dot's Place, and the Cuban Sandwich and Tres Leches Cake at El Veloz.


1. Migas at Tamale House #3. All told, this meal takes up a few worthwhile hours of your life: 45 minutes standing in line to order, an hour to eat every last bit of an enormous serving, 30 minutes to sit cautiously still in the aftermath of consumption, and the rest for the inevitable nap.

3. 1/2 Roasted Chicken Dinner at Julio's. The most perfectly cooked and seasoned chicken around. Its meat slips easily from the bones, under an herb-studded, crispy skin. The accompanying rice and beans are just as good. Everything on the plate is fresh and greaseless.

4. Rice Pudding at HighLife Cafe. A sweet and sultry pudding, loaded with cardamom and cooked to a diner-style consistency (with smooth lumps). It makes a great gift to oneself any lazy afternoon.

5. Cheeseburger and French Fries at Posse East. A standard sports championship-watching meal, for those who join the Posse crowd around game time. The burger is in the good old soda fountain style, and the fries are divine.

6. Sesame Chicken at Suzy's China Grill. The first dish gone at any group meal. The chicken is almost shockingly moist under a sticky rich, sweet and spicy glaze.

7. Chicken and Rice Lunch Special at Longhorn PoBoys. One of those rare quick, hot, well-rounded, and delicious downtown meals. Tender chicken is served with a heap of vermicelli rice, a salad, and a side of great hummus.

8. Carne Guisada Burrito at Chuy's. A Chuy's burrito is notoriously daunting, weighing in at what seems like several pounds. However, this one, packed with tender, spicy chunks of meat, is worth wrapping both hands around.

9. Liver and Onions at Threadgill's. Occasionally, Threadgill's offers a special plate of liver for $2.95 that can feed three people. I almost feel guilty getting away with so much protein and iron so cheaply. 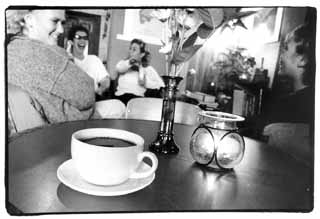 2. HighLife Cafe. Ah! We love that French press. Besides, where else does the coffee come ground by hand in an antique grinder?

4. Flipnotics. Wrap your hands around a warm mug and settle in for some cool tunes on the patio.

5. Pitchforks & Tablespoons at Eastside Cafe. Cappucino with a view of the garden.

6. Spider House. The most colorful outdoor seating in town.

8. Ruta Maya. An Austin institution with a political conscience and the perfect perch for people-watching.

9. Mozart's. A romantic spot on the water with adjacent newsstand/bookstore, etc.

TOP NINE TAKEOUT OR BRING IT HOME WITH YOU RESTAURANTS 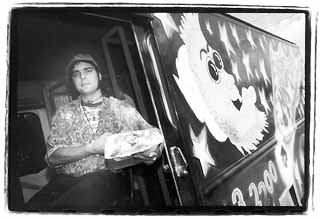 1. Midnight Tacos. Their ads cater to the party crowd, but they have a gold mine in parents of young children looking for hassle-free sustenance once the wee ones are down.

2. Reale's Pizza. It's a long drive from the center of town, but one bite and you know the trip to pick it up was worth it.

3. Central Market. There's the salad bar, the Cafe on the Run, sushi, pizza, and the pre-packaged entrees for those times when creativity is lacking, but there's also smoked salmon, prosciuttos and pâtés, cheeses and make-it-in- minutes bulk food, plus you can get your beer and wine to go, too!

4. India Cuisine. This spot on the frontage road of I-35 makes a mean buffet, and you're invited to take "all you can eat" home with you if you don't feel like eating in.

5. NeWorlDeli. We've raved about the sloppy joes before, and the good news is that they'll pack 'em to go for you with a foil bundle of pickles to boot.

6. Chango's. Burritos and tacos that are both fast and fabulously different than the run-of-the-mill ones you usually get to go.

7. Hyde Park Bar & Grill. Yes, you can call in an order of fries and devour them in the privacy of your own home!

8. Schlotzsky's Bread Alone. Breads that are meals in themselves and pastries that'll make you weep.

9. Longhorn Po'Boys and Falafel. Great garlicky sandwiches that fill you up fast.

1. Al Pastor Taco at Curra's. Curra's does an al pastor extraordinaire topped by pineapple and onions, sided with an avocado-based sauce.

2. Al Pastor Taco at Polvo's. With an al pastor taco from Polvo's on a fresh corn tortilla, you may as well be in Mexico. Rumor is they always have the al pastor on Thursdays.

3. Don Juan Taco at Juan in a Million. Order one of these with an extra flour tortilla and you won't be able to eat for the rest of the day, plus your mouth will be too busy singing the praises of Juan's special bacon.

4. Egg, Bacon, Potato, Jalapeño, Lettuce, and Tomato breakfast taco at Tamale House #3. Lettuce on a breakfast taco is an unusual bonus. They don't have even have coffee here, but the tacos make it worth it, anyway.

5. One Mushroom Taco and one Steak, Rajas, and Cheese Taco at Curra's, with contents homogenized. Order two tacos at Curra's, and they throw in a side of beans or rice, making a generous and delicious meal for about $4.25.

6. Ceviche tacos on fresh corn tortillas at Manuel's. During happy hour, get a half-price bowl of ceviche and go to town with hot, fresh, corn tortillas. These do-it-yourself tacos are economical yet sophisticated.

7. Beef Fajita Tacos at Maudie's. Fajitas are a food designed for couples, so fajita tacos are the perfect food for a hungry, single girl.

8. Machacado and Egg Taco at El Sol y la Luna. Dried beef and egg can be just the thing to get you through a tough morning.