A Culture Through Its Food

Jewish Cooking in America
With Joan Nathan
(PBS, Tuesdays, 11:30am, repeating most Saturdays, 3pm, through March)

No doubt two things come to mind when you imagine Jewish food: bagels and drab kosher packaging. You might think of things like pickles, olives, salty fishes, and sweet wine, too, although these items are not exclusive to Jewish tastes. And if you're Joan Nathan, producer of the current PBS video series Jewish Cooking in America and author of its companion cookbook, you'd even include convenience foods like Sara Lee cheesecake, Dr. Brown's soda, and Hebrew National hot dogs. These are either products of Jewish commerce or part of the kosher diet. True, some Jews stake a claim to Chinese food (witness Cantonese restaurants in many Jewish neighborhoods) and to diner-style, early-bird buffets (as in Seinfeld). Of course, as Nathan documents in her thorough reports, "Like other ethnic groups, Jews include in their diet whatever's around." 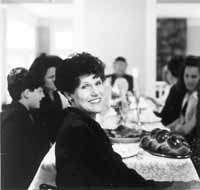 Tracing the history of Jewish food traditions is the theme of Nathan's two projects. The book, Jewish Cooking in America, won multiple cookbook awards following its initial release in 1995. The newly released edition has been updated to serve as a companion to the 26-part video series. It's apparent from Nathan's work that she's seen Jews fight tooth and nail to preserve heirloom recipes. Hence, her projects try to flush out some concept of "authentic" food. You've likely heard longstanding debates over the density of matzoh balls, for instance, or the sweetness of kugel. And this internal strife doesn't even compare to that ignited by popularized ("bastardized") food, like jalapeño bagels (or, for that matter, most any Austin bagel) or mayonnaise on corned beef and rye. For secular American Jews, especially, such culinary loyalty provides an alternative to observing kashrut, keeping kosher. While their dietary convictions may not be motivated by religious law, they are no less solemn. For these Jews, food stands as the last bastion of defense against complete cultural dispersion. They preserve their religion, perhaps through challah more than scripture. Hence, a food infraction offends like blasphemy; it can be as disheartening to Jews as a conversion to Christianity.

Of course, other Jews are equally dismayed by ancestral recipes, such as the recipe for petcha (calves' foot jelly). They embrace a more modern Jewish cuisine, a concept that still defies tight definition but includes such trendy items as salmon ceviche and gefilte fish with salsa. Old-time recipes using schmaltz (rendered chicken fat) are filed away or at least updated with olive oil. Then there are alternative diets promoted by innovative Jewish cooks such as Mandy Patinkin's mother, whose recipe for Vegetarian Chopped Liver is presented by Nathan as an update of the standby side dish.

Nathan's video is a "culinary travelogue." In it, Nathan visits famed Jewish food institutions -- Ratner's dairy restaurant on New York's Lower East Side, Eli's cheesecake factory in Chicago, and Woolfie's deli in Miami -- and introduces us to interesting people -- both celebrities and no-name grandmoms who tell their stories of pogrom escapes and pushcart sales. Sara Lee, Mollie Katzen, and Isaiah Scheffer share media time with the Steinbergs from Highland Park, Illinois. The video is ambitious, broaching huge topics like "What is kosher?" or "Jewish Roots in Early America." But what it offers in breadth, it occasionally lacks in style and substance.

No question, the show is original, packed with location footage and exclusive interviews, but its folksy production undercuts its merit. Nathan's style is to let her guests speak for themselves -- a respectable approach -- but only those folks used to performing give us a good show. Isaiah Scheffer, for one, hits home with instructions for the perfect chocolate egg cream.

And Nathan herself at times stifles the show. She is smart and congenial but lacks charisma, and it's plain she is a novice interviewer. Her questions are often banal and her pacing slow, as can be seen in the segment with Mollie Katzen, a reputable cook but an unpracticed TV personality, making borscht. These kitchen segments come off as unpolished and, worse, contrived. It's painful to watch Nathan and guest chefs taste food on TV as if they're vying for a Food Network spot. Nothing undercuts a cook's credibility like rehearsed testimony. Besides, for this show especially, it misses the point: Viewers should walk away with a richer context for understanding Jewish food, not a recipe file.

Occasionally, though, Nathan's inhibited style strikes the right note, as when she's cooking with Holocaust survivor Aggie Stern. Here, Nathan's restrained banter eases some powerful emotions, swelled by memories from Stern's tragic history. Nathan eases Stern into a discussion of her Auschwitz terror and her resulting rejection of God and Judaism. On this show, we're witness to Stern revisiting old recipes as she commemorates a painful history and expresses her newfound religious faith. "I'm happy," she insists repeatedly to Nathan, as she stares, through tears, into her palachinta batter. You get the feeling she's addressing a distant past and not her hostess or the camera. Nathan's reticent style brings this potent exchange to bear.

The 26 episodes of Jewish Cooking in America With Joan Nathan surely include enough such heartfelt moments to warrant a view, but I'd recommend taping multiple episodes for back-to-back replay. One half-hour show doesn't cover nearly enough ground to warrant an interruption of your Saturday. An episode on cheesecakes, for instance, takes us on wonderful excursions to Chicago, New York, and Michigan for on-site viewing of the most famous and best versions around, but it hardly considers the question: Why is cheesecake Jewish? Nathan's companion book to the series does, however, argue a compelling case for Jews' claim to this dessert, citing Jewish cheesecake aficionados (the inventor of cream cheese, for one) and picking up on other areas where the video falls short.

The strength of Nathan's writing lies in the depth of her research. With five cookbooks and a documentary on Passover to her credit, she has done plenty of homework. Jewish Cooking in America, the video companion book, reads like a cross between history and memoir, with recipes bearing witness to a culture's past.

The book shows off American Jews' modern culinary diversity and reveals their many traditions, most of which originated in Eastern Europe. Some invaluable recipes include: corned beef, pickled herring, potato knishes, tsimmes, and schmaltz. The chapters present recipes in order from the most historic to the contemporary, a smart setup that encourages easy chronological comparison of staple foods. Nathan "justifies" the inclusion of any unusual recipes in the collection with "proof" that links them to the Jewish community. She pairs each recipe with an anecdote or picture or advertisement that places it in cultural context: a letter between Jewish housewives or a 1913 Crisco ad. An obvious regard for authenticity guided her editorial efforts.

Unfortunately, Nathan may have sacrificed taste for authenticity. None of the recipes I randomly tested from her book worked. The recipe for Governor's Wife's Blintzes was inaccurate; the blintzes were simple to assemble and tasted fine, but the cheese stretched to fill only half the crêpes. The Chicken with Vinegar Sauce, Olives, Raisins, and Garlic turned out a greasy, tasteless waste. The recipe for meatloaf from Nathan's own mother left me unimpressed and wanting for the addition of onion soup mix. An ethnic cookbook recipe's success depends on two things: good editing and nurtured genes. The first requires attention to the tiniest cooking details: Do you chop the olives or leave them whole? What kind of vinegar should you use? An editor of a collection like this should not only question methods but also fairly judge the quality of the resulting food, even with famed recipes. The German Apple Torte from Bulter, Missouri, for instance, is a simple dessert with historic value, brought to the Midwest from Germany after World War II. But it's not a great dessert; the crust is subtly sweetened but too dense, and the filling, however classic, is lackluster.

But even experienced cooks acknowledge that inherited senses and training time at the stove are often the main ingredients for successful ethnic cooking. As one of Nathan's guests testifies, "It just has to feel right." Only the best editor can translate such subjective artistry.

In the end, Nathan's book, like her video, is less a "best of" than a "best remembered" collection of Jewish cooking; it is a more worthy cultural study than recipe file, better at documentation than instruction. Want to know the difference between nova and lox? How about where the Borscht Belt is, when and who was the first Bat Mitzvah, what is unique about Hungarian Jewish food, why challah is sweet, or who made the first Reuben? And how about knowing why oil, not potatoes, is the key to a traditional latke? Jewish Cooking in America is an invaluable reference for anyone wishing to understand American Jewish food. I'm not convinced that it offers true-tested recipes, but, given everything else, it and the video together make a compelling study of Jewish life.