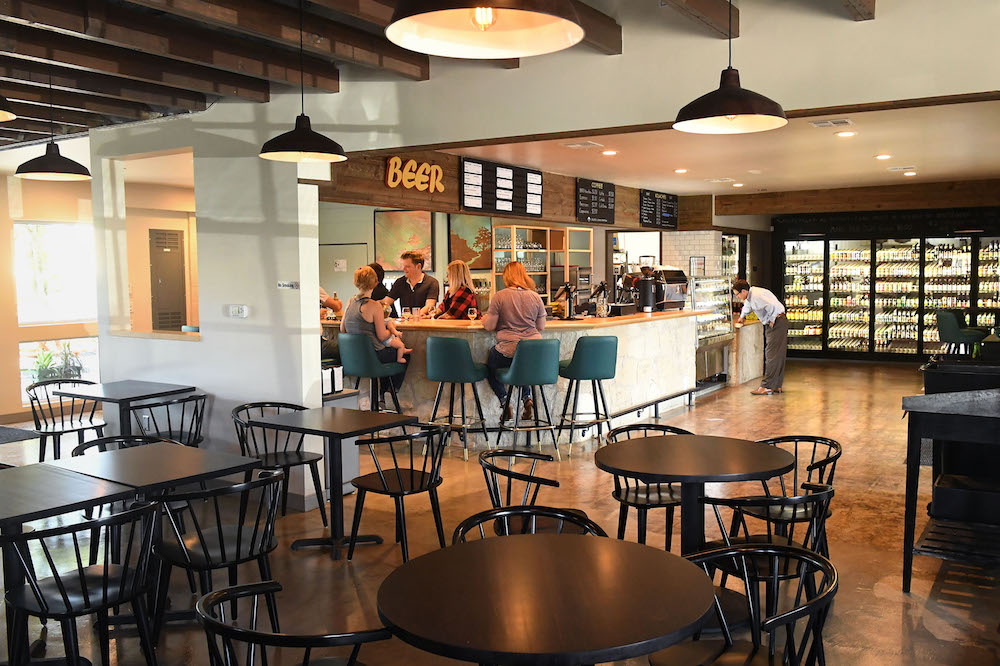 What’s not to love about this one-stop shop? Anchoring the compound is the open-air beer garden and OG counter serving a full espresso bar plus savory klobasnek (including vegetarian sausage) and sweet options like PB&J kolaches. Their on-site craft brewery, Batch Brewhouse, churns out tasty bevs like hibiscus pilsner, summer stout, and a hybrid wine/beer series. As if this sundae needed a cherry, they’ve also got a kickass food truck to satiate late dinner cravings.

Owners Bethany Andrée and Karl Gilkey honor Austin’s weirdness and wonder at the long-awaited younger sister of dearly missed Snack Bar. Bobo’s arrived in style with a wide selection of snacks and beverages all from Central Texas purveyors, including plenty of vegan and vegetarian options. As a “community tasting room,” it’s the perfect place to kick back and stay awhile. 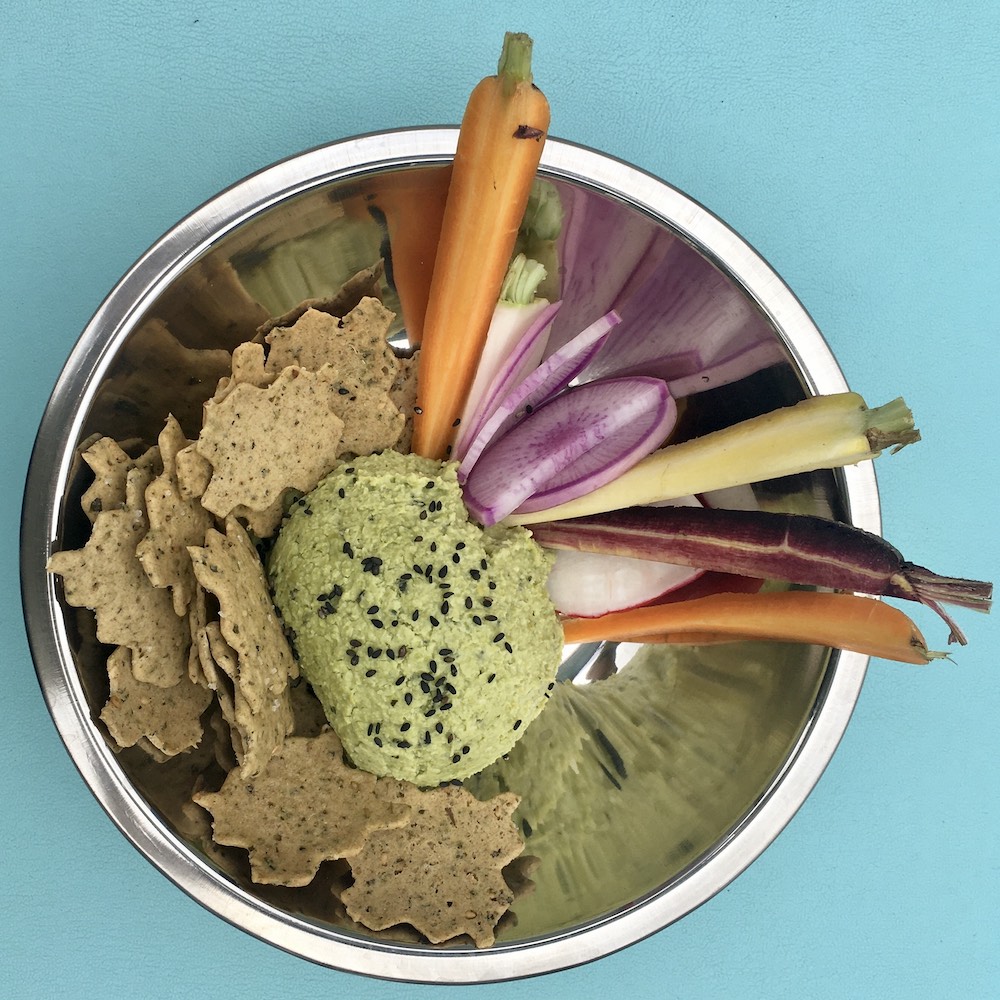 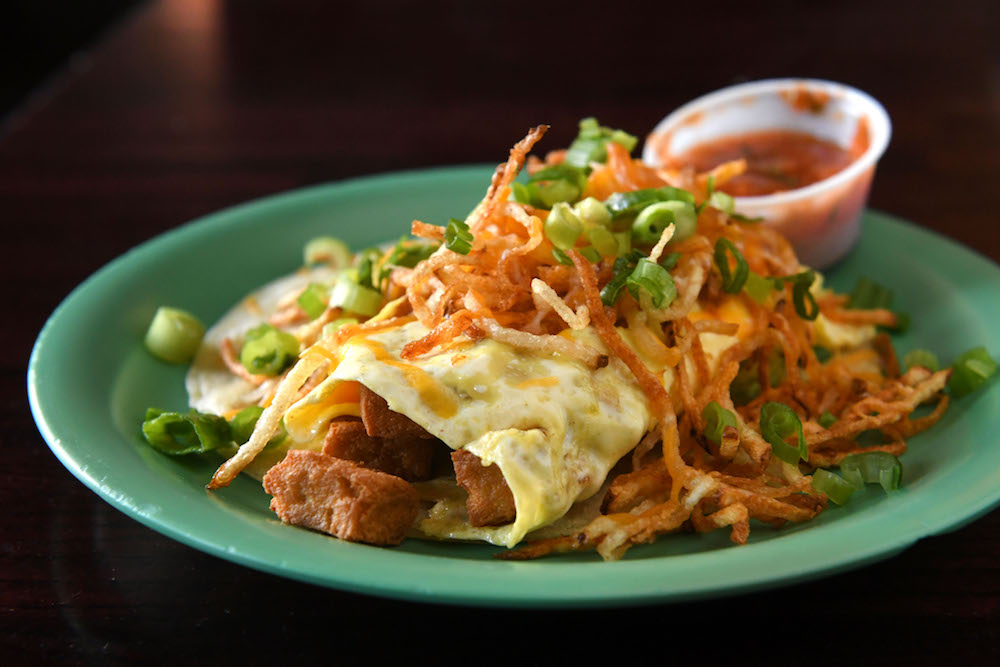 We usually get The Wife’s Cheeseburger, because it matches our platonic burger ideal, but the menu’s chockablock with enough sammies, tacos, and all-day breakfasts to almost overshadow their impressive array of drinks (including 25 draft taps). The feeling of neighborhood is strong in this casual, welcoming place, with regular artist, musician, and comedian showcases.

Contigo’s unique rustic atmosphere is modeled after their Fredericksburg ranch, meaning plenty of outdoor communal seating and hearty fare centered on fresh, seasonal ingredients – think tri-tip, quail, pickled okra, country pâté. A rotating menu means your faves may not stick around, but you can always count on the famed burger to hit the spot. 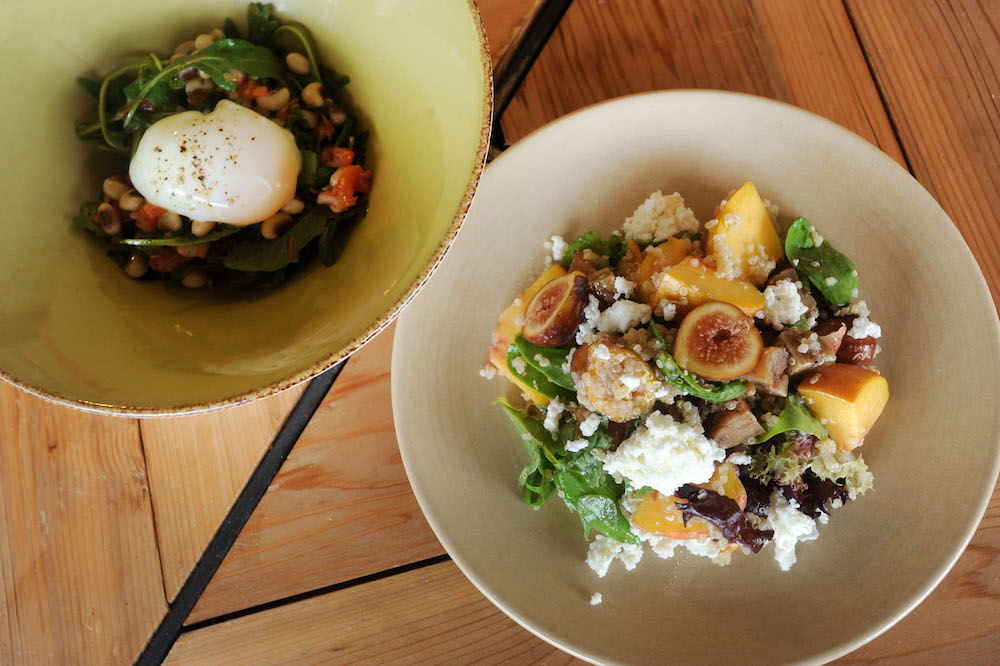 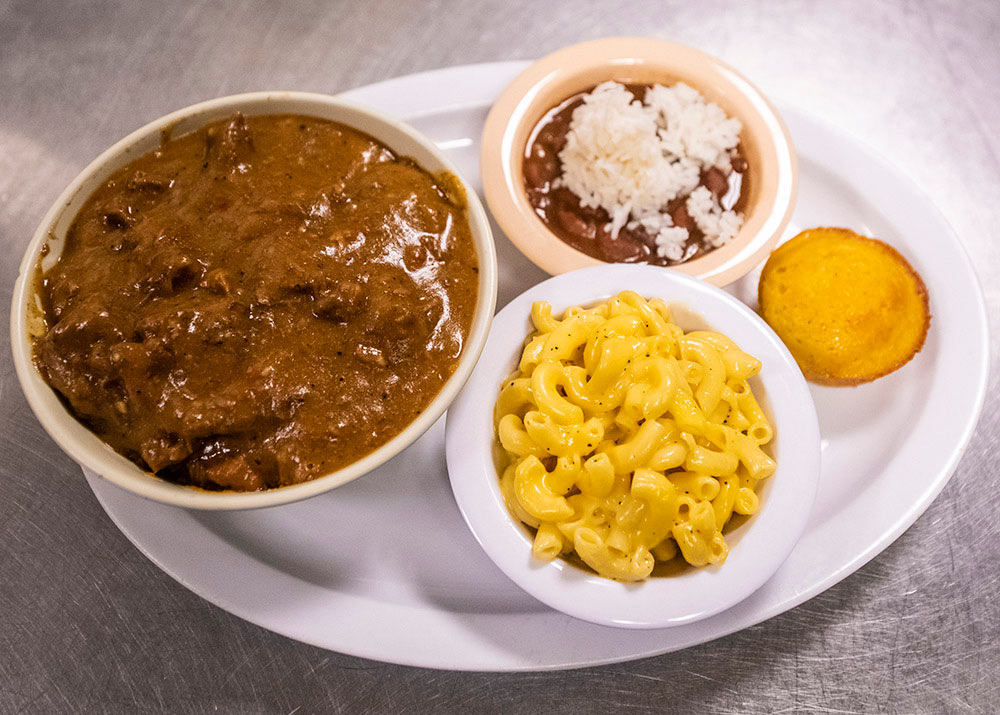 Country Boyz harkens back to an earlier time: Think Flo’s on E. Seventh and Virginia’s on S. First. Everything at CB’z is made from scratch. Wednesdays are for smothered pork chops and baked chicken, while Saturdays are for the hand-pounded chicken fried steak. Blue collar, friends. Call in your order and devour it at the picnic tables out front.

About to celebrate two years of serving suadero y salsa, chef/owner Luis “Beto” Robledo is still showing up in style with his Mexico City-style tacos. It’s a simple menu, but it sells out every night thanks to expert proteins decorated with fresh cilantro and onions and wrapped in fresh corn tortillas from the Colonial Tortilla Factory in San Antonio. 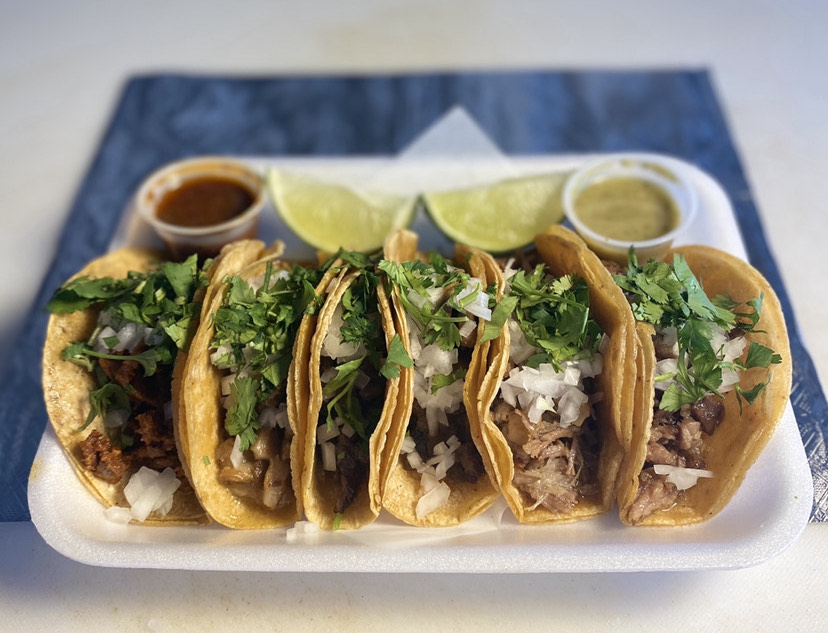 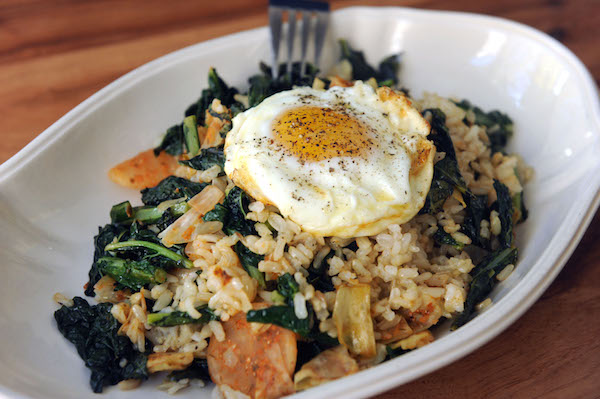 You want pies? You got ’em. You want antelope sausage? Say no more. You want a fried chicken dinner on Sunday? Come on in and sit for a spell. Driven by a hyperfresh and hyperlocal ethos, chef and hunting aficionado Jesse Griffiths has anchored the local foods movement in Austin for nigh on 15 years, with the Manor Road restaurant turning seven this year. Here’s to many more to come.

Serving Neapolitan-style 12-inch pies from an 800-pound wood-fired oven, Dough Boys is a welcome addition to Austin’s slow-ferment pizza scene. They use locally sourced flour from Barton Springs Mill and ferment the dough for 36 hours. Approaching their one-year anniversary, and opening smack dab in the middle of the pandemic, gives them – and us – plenty to celebrate. 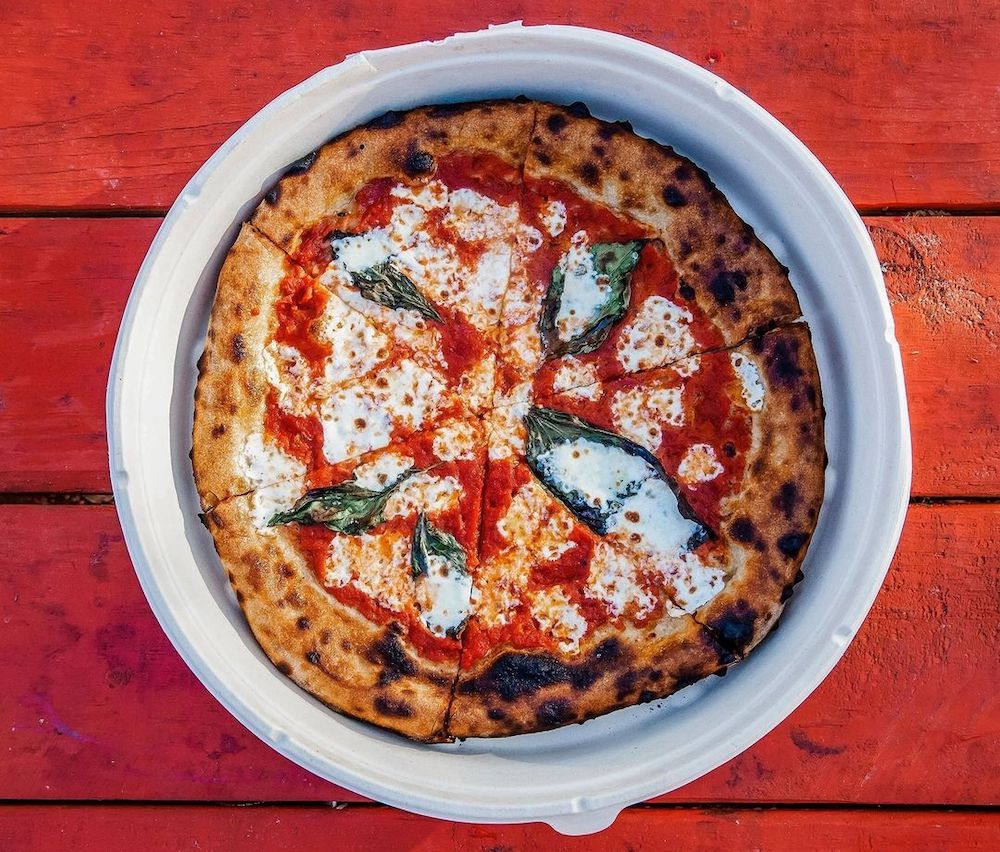 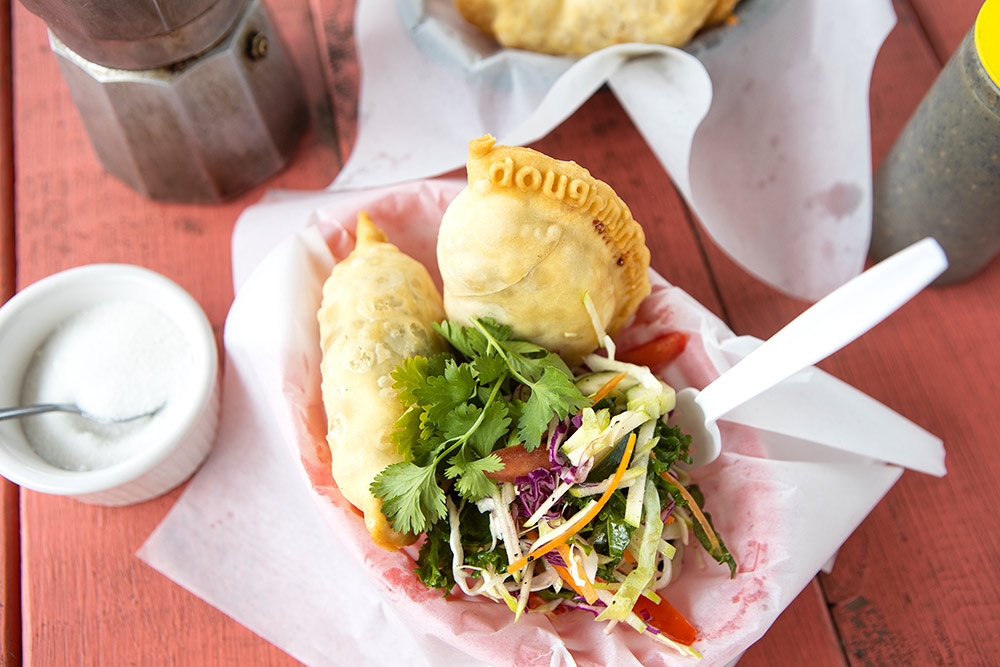 The son-and-mother team behind Austin’s first Dominican food truck has been blessing our streets and taste buds for nearly five years, and they’ve got new digs to extend the reach of their impeccable empanadas. Red wine-and-oregano-soaked beef picadillo is their claim to fame, but don’t sleep on the restorative powers of ratatouille. 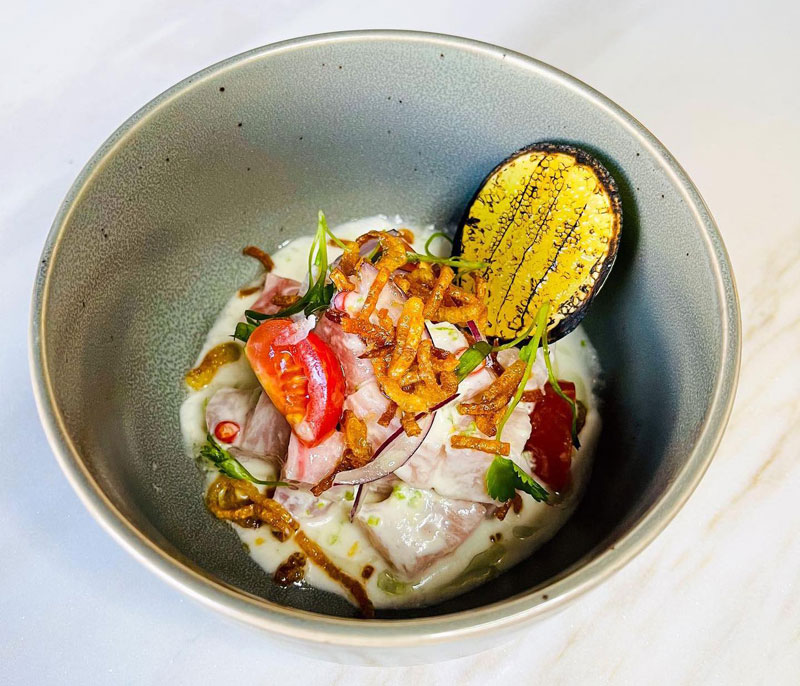 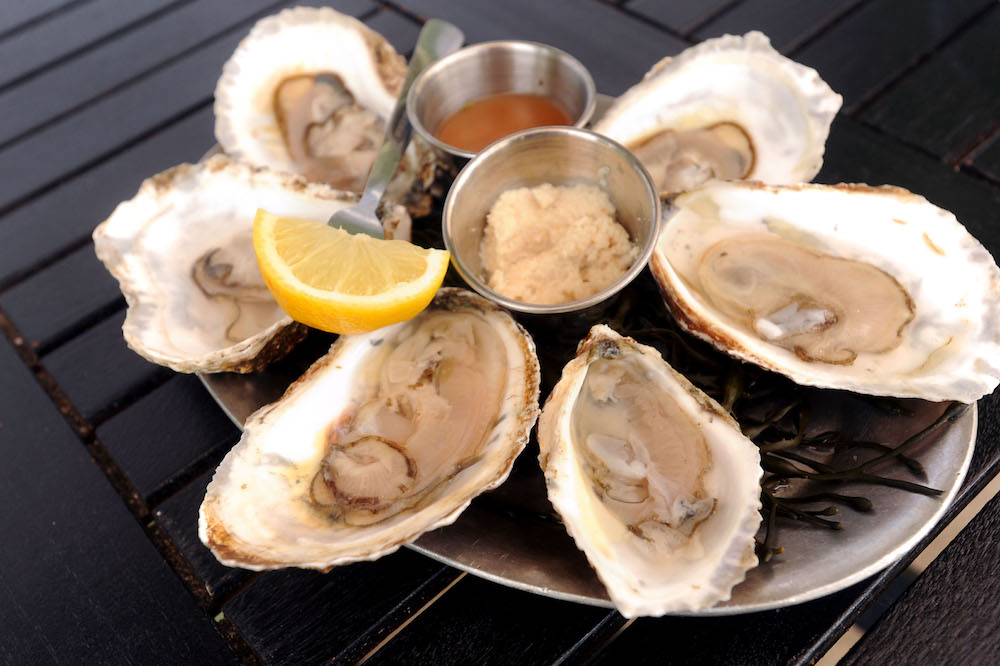 Old-school continental elegance and down-home Austin goodness mingle in this Eastside gem, where the refurbished pharmacy interior is as Instagrammable as the locally sourced food is delicious. Reckon you’ll feel like a Rockefeller no matter how you’re eating the fresh oysters that supercharge happy hours and more.

Pasta may well reach its sauce-enhanced apotheosis at this Mueller-based bastion of Italian culinary good works via the skills of chef Fiore Tedesco and his crew, but it’s not only about the noodles. Locally sourced meats and veggies, wisely curated wines – everything gets that Golden Goose treatment. Perhaps even more extraordinary are Tedesco and co-owner Adam Orman’s unmatched efforts to feed folks across the city during hard times. 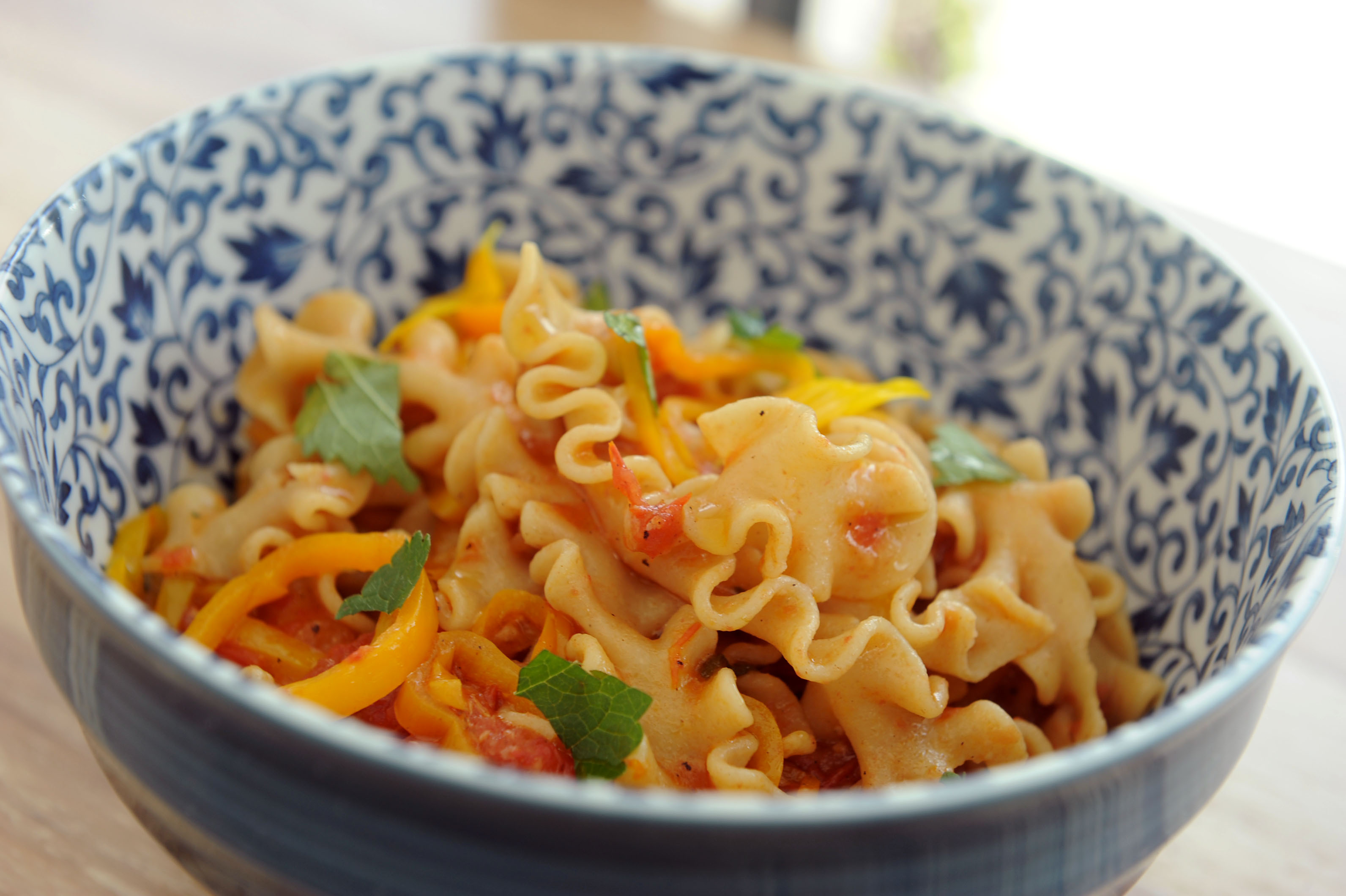 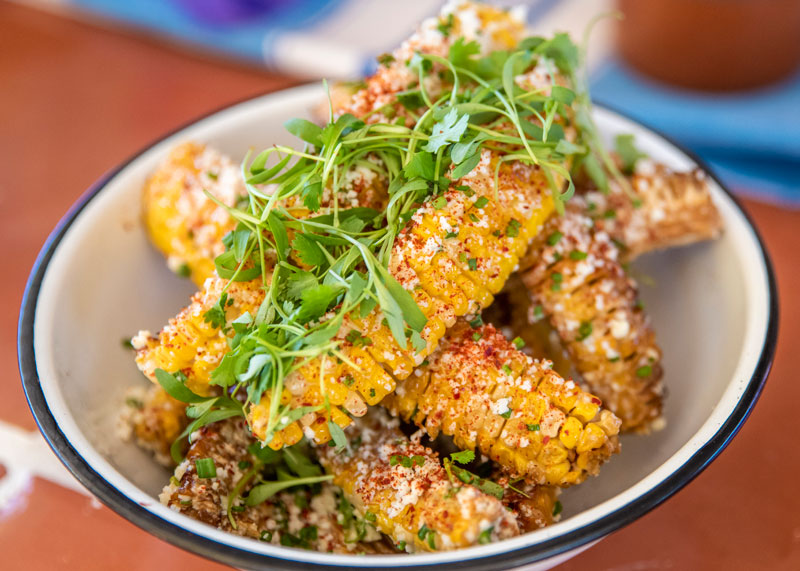 Chef Edgar Rico takes the nixtamalization of corn to heights of savory goodness at this Eastside venue, then enhances his fresh tortillas with the likes of roasted beets, yellowfin tuna, duck confit, potato and chorizo puree – all served up in a stylish, intimate setting. Bonus: Host extraordinaire Sara Mardanbigi is a community-building star.

The paperboy is now the paperman, having graduated from a parking-lot food trailer to a sleek and chic brick-and-mortar, where locals can roll out of bed and enjoy a greatly expanded breakfast and lunch menu of pastries, toasts, grain bowls, and sandwiches. Order an Aperol spritz or cereal milk punch alongside and the day’s news won’t bother you a bit. 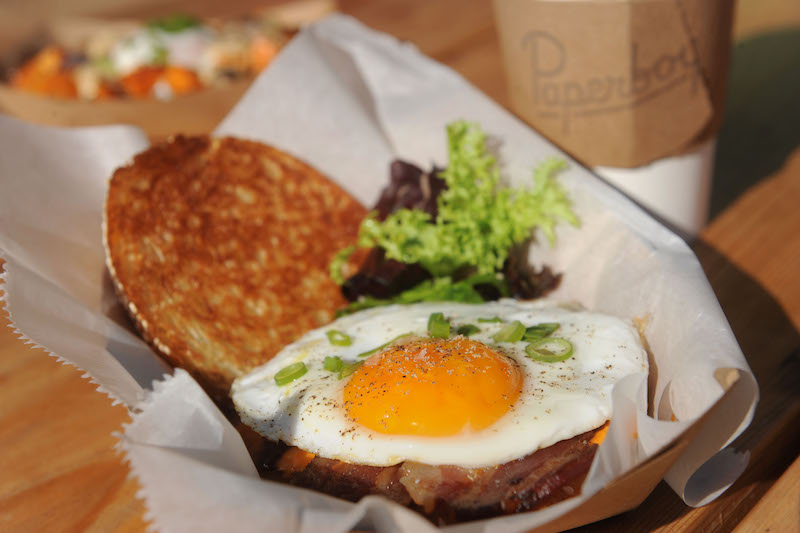 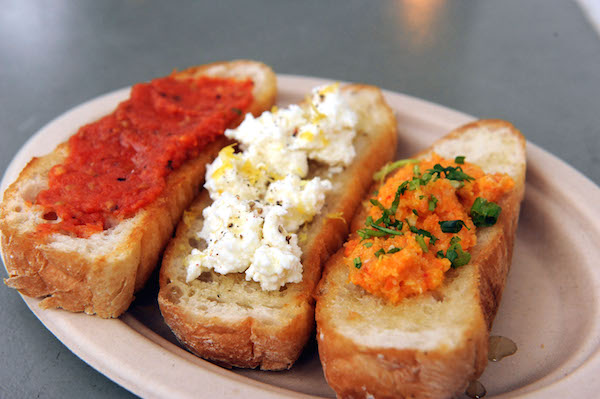 If you ever think that a food truck in the side yard of a theatre space off Manor Road can’t become a powerhouse of traditional Italian cuisine, talented chef (and relentless community champion) Nic Patrizi is going to prove you wrong, meal after meal after meal. Secret menu item: the Wop Burger. 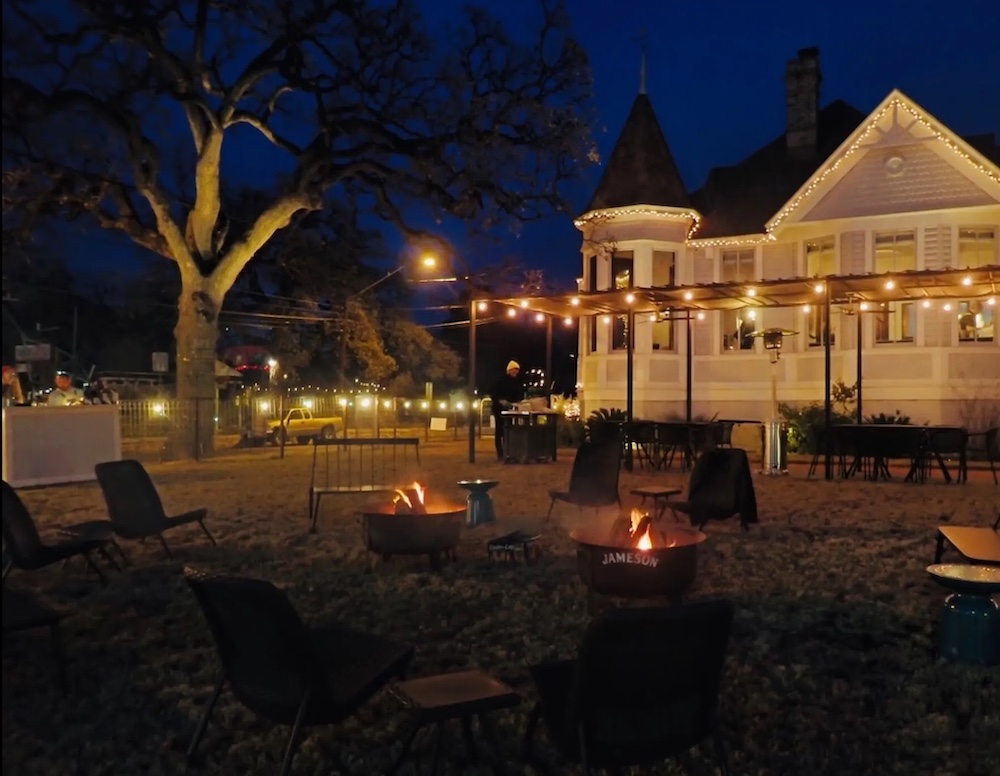 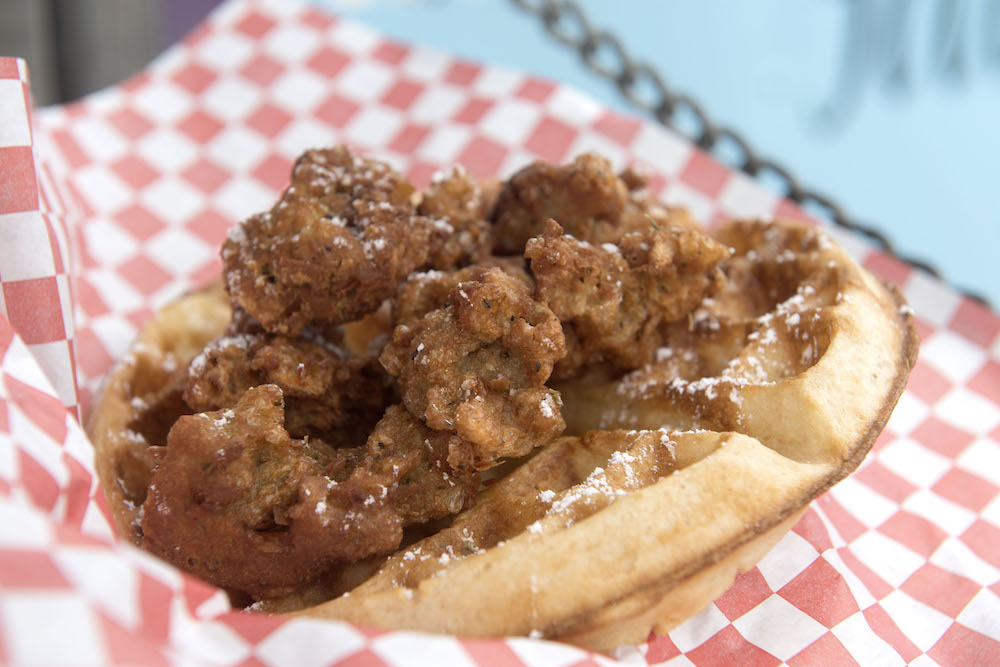 Sassy’s brings the soul to the city’s hip and eclectic Eastside in a way that only vegan Chicon N Waffles can (yes, you read that right). So start chowing down on this food truck’s original recipe and don’t be surprised when you head back for an extra side of that cajun mac & cheese or hot water cornbread.

Breathing new life into Kyo¯ten’s former Mueller space is the come-to-life dream of chef Michael Che, who trained under Otto Phan himself in Chicago. Che takes pride in the preservation methods of Edomae-style sushi (a more “orthodox” nigiri), offering an 11-course omakase to a small group of lucky patrons. Turn on notifications if you hope to score a rezzie in the next round because Austin, it seems, is officially obsessed. 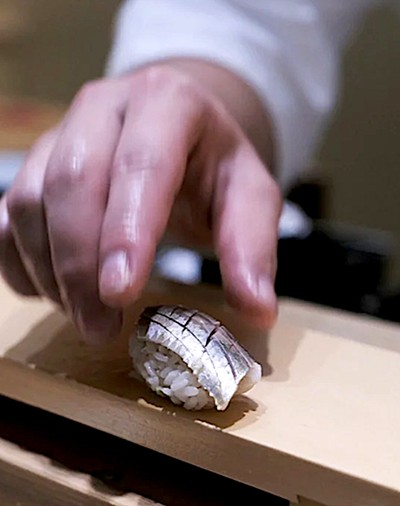 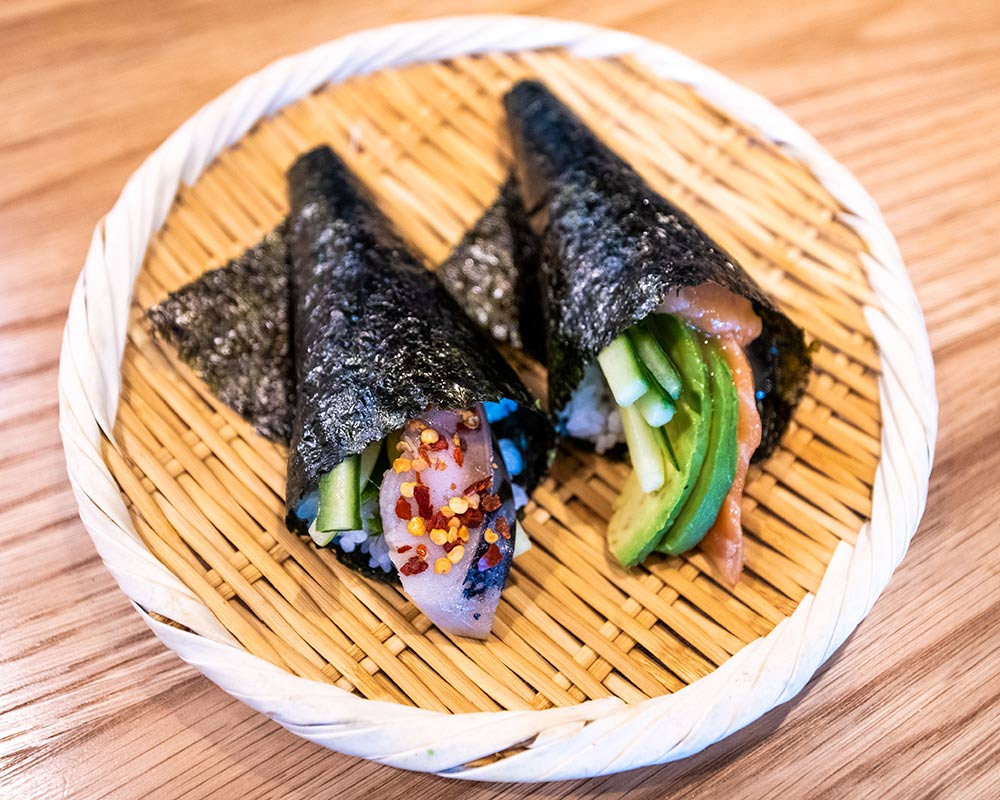 When the pandemic hit, Nic Patrizi, owner of the Vortex’s beloved Italian food truck, quickly pivoted: He turned his then soon-to-open Cajun concept in the former Unit-D Pizzeria spot into a soup kitchen, serving gumbo and red beans and rice to anyone who asked. Now the restaurant, an ode to the Patrizi family’s rich Beaumont history, offers those same classic comfort foods, plus delights like fried chicken po’boys, cochon de lait and sassafras rice, and dinner specials. Paying homage and paying it forward, one tasty meal at a time. 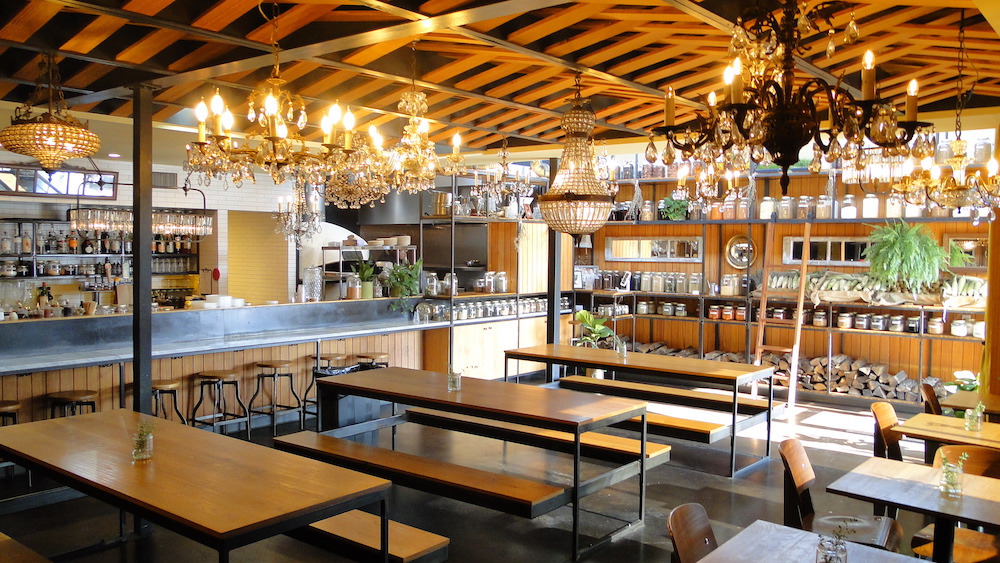 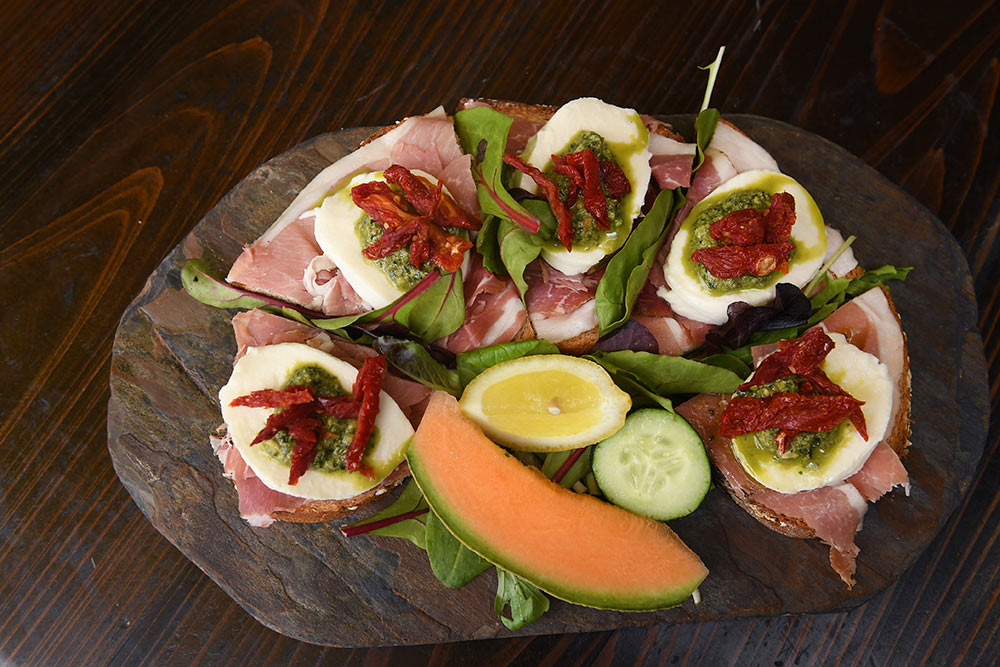 Pull up a chair and savor the moment with strangers. At Blue Dahlia, tables are arranged so that diners brush elbows while they enjoy a midmorning tartine or fill up on French classics like ratatouille. The idea is to create community around a baguette. After all, that’s what breaking bread is all about. Inducted in 2018.

There once was a little house on Manor Road that served the best artichoke manicotti in all the land, but carrot pasta and sun-dried tomato cream sauce were only the beginning of the story. It’s a tale with plenty of romance (those sparkling limosas) and some very deep drama (the chocolate almond torte), perfect for all our happily-ever-afters. Inducted in 2017. 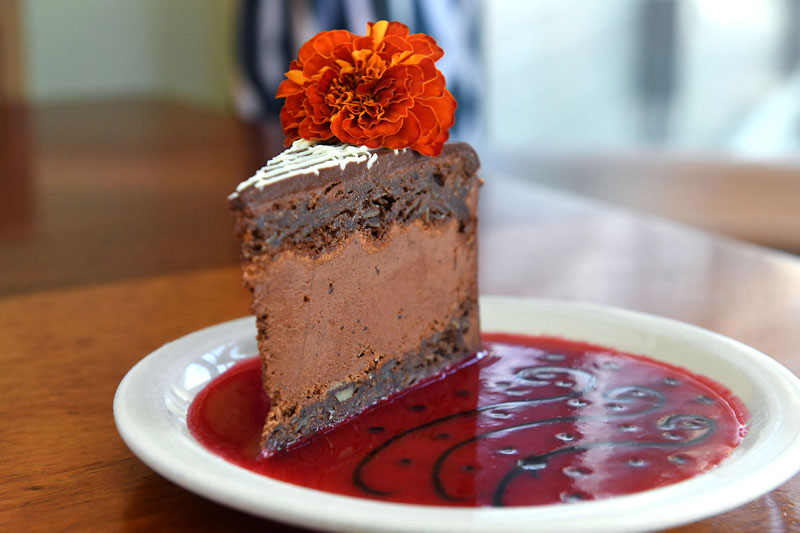 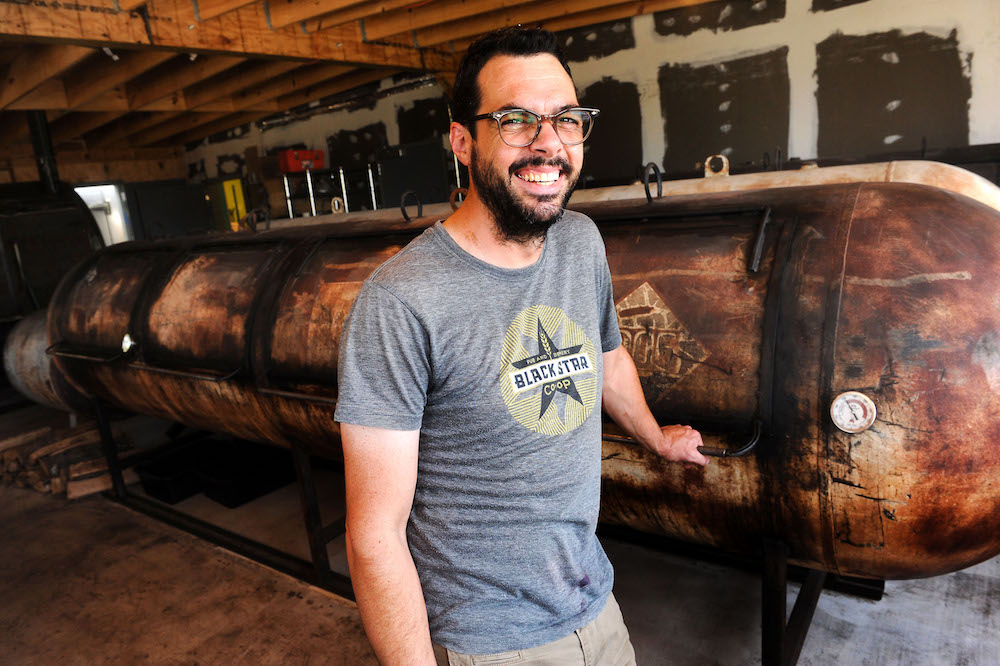 We’ve been loving those brisket burnt ends since Aaron Franklin’s trailer was located not far from the Chron offices near I-35, way back in 2009. The smoke signals at the now Eastside restaurant are nationally recognized – an Obama fist bump, a James Beard award, and even bad boy Bourdain’s unabashed obsession. Even the notorious hours-long lines can’t deter the steady cult following. But when it comes down to it, Franklin Barbecue has earned its crown because the food comes first, and it’s always delicious. Inducted in 2018.

It’s the chicken-fried chicken, y’all. Many of the Southern comfort food pleasures on the menu at Hoover’s Cooking, a two-decades-and-counting Manor Road eatery, have made it an icon: their enormous and delicious pepper-fire soaked and smoked chicken wings, sweet potato coffee, banana pudding, and a side of broccoli that looks like one of the tree people from Lord of the Rings (yeah, we know, they’re called Ents). While the Smokehouse options (Jamaican jerk ribs!) compete with the best of ’em, it’s that chicken-fried chicken, paired with mashed potatoes and a side of jalapeño creamed spinach, that offers something equivalent to the culinary version of a long hug from an old friend. Inducted in 2019. 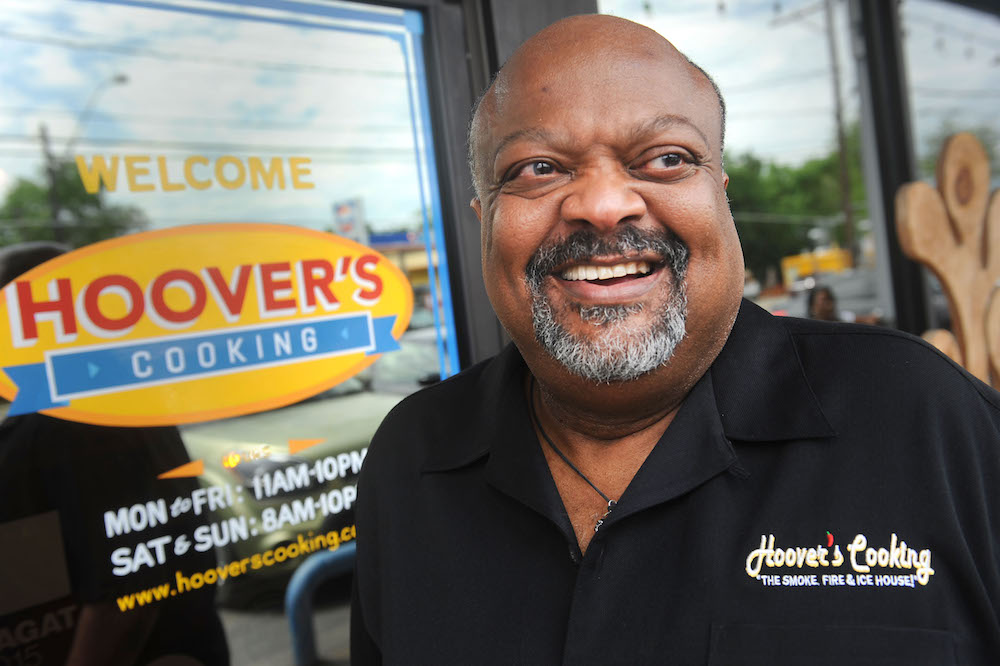 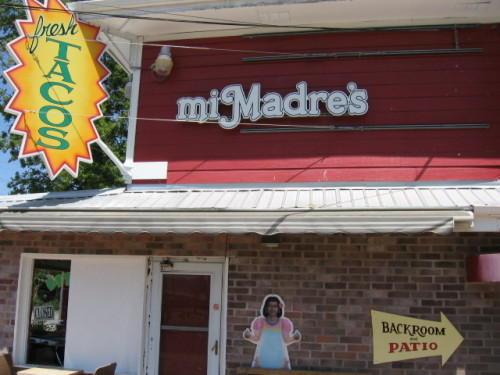 You’ve seen their quirky, quintessentially Austin sign and enjoyed their fun-loving approach to social media, but did you know that this family-owned and -operated business has been around since 1990? Founders Aurelio and Rosa Torres opened their 10-seat Tex-Mex restaurant serving hella good tacos, and over the years made so many loyal fans that the business expanded to occupy the entire corner, plus some. Now owned and operated by Torres’ son and daughter-in-law, Edgar and Christina Torres, the menu also boasts burritos, platos fuegos (mole enchiladas! carne guisada!), and your new favorite drink menu. (If you imbibe, don’t you dare skip the mango chamoy margarita.) The Torres crew also owns nearby School House Pub and not-so-secret speakeasy Techo Mezcaleria & Agave Bar. And if there’s one good thing about the last year, it might just be to-go margs from this truly beloved Manor Road staple. Inducted in 2021.