Fueling the soccer fandom is no small feat, but Q2 stadium – home to the Verde – promises more than just beige concessions. There’s a uniquely local spin on what’s billed as “Austin’s biggest backyard,” and the food and beverage experience is a strategic mash-up of hometown favorites and big-name familiarity, resulting in a pretty impressive roster of choices for just about everyone.

Austin FC, in collaboration with Levy Restaurants, launched 512 Food Co. as the official hospitality team of Q2 Stadium. In the late 1970s, Chicago-born Levy started with family recipes at a revamp of a local deli, and in 1982 expanded into sports catering with a fine dining mindset at Comiskey Park (then-home of the Chicago White Sox), eventually graduating to Disney World and global consulting. The partnership promises to offer variety in addition to community initiatives and efficient service for the 20,500 fans at each game through a combination of brand partnerships and local small biz. While we were all hunkered down pandemic-style, Austin FC and Levy worked with the Austin Chamber of Commerce, the Austin LGBT Chamber, the Greater Austin Hispanic Chamber of Commerce, the Greater Austin Black Chamber of Commerce, and the Greater Austin Asian Chamber of Commerce to devise a plan to engage all kinds of food trucks and restaurants and get them set up for opening day. And you know we’re here for that.

The “Austin Table” anchors one part of the dining experience as a rotating restaurant in partnership with Auguste Escoffier School of Culinary Arts. They'll focus on minority-owned local businesses while incubating new concepts and providing on-the-job training for Escoffier students.

There is Chinese fast-casual at Bao’d Up (section 118), Tex-Mex at Casa Chapala (section 121), and kolaches from Slovacek’s, the famous West, Texas, shop (sections 118 and 123). Austin-based franchise DoubleDave’s Pizzaworks (near sections 105 and 123), known for their pizza rolls, and local bakeshop powerhouse Easy Tiger (near sections 108 and 127), with their beer cheese and bread galore, both have big square footage. Austin's ubiquitous Pluckers Wing Bar (near section 135) brings those game day favorites along with T-Loc’s Sonoran Hot Dogs (near section 119). And because tacos are as Austin as it gets, they've secured One Taco (near section 107), Taco Flats and their killer quesadillas (Premium Terrace), and Tacodeli, slingers of Austinites' favorite green sauce, Salsa Doña (near section 122).

One of the most noteworthy stadium gems is the forever legendary – with too many awards to even count – Valentina’s Tex Mex BBQ (near section 137). A few weeks ago when we toured, they already had those famous smokers fired up, and henceforth we've all called that section of the stadium "Valentina's Corner." The posted menu boasts a chopped brisket sandwich plate, a smoked pulled pork sandwich plate, a sliced brisket taco, and the "El Rey" with smoked pulled pork butt and sausage with habanero mustard, their signature sauce and slaw, and spiced chips. Sure, you can visit their locations around town (and not pay the stadium premium), but there's something pretty special about helping launch a local favorite into MLS history.

512 Food Co. will also host several stadium-only dining concepts led by Executive Chef Sam Boisjoly and his team. The list features their takes on stadium classics, with portable convenience in mind. ATX Doghouse (Premium Terrace) offers “local twists on traditional hot dogs and sausages,” while the ATX MRKT and Austin City Goods (near sections 104 and 127) are grab-and-go markets with vegan/vegetarian options, fresh fruit, ice cream, snacks, and Valentina’s BBQ sandwiches – a good option if Valentina’s Corner looks like an anthill of people, which it surely will. Eastside Eats (near section 128) and Munchies (near 103) will have more traditional game day fare, with nachos, chili dogs, warm Bavarian pretzels, and Slovacek sausages; El Mercado (near section 102) is a Latin-themed grab-and-go market with vegan and vegetarian options, snacks, hot Mmmpanadas (don’t skip the peach cobbler) and fresh organic tamales from farmers’ market staple Tamale Addiction. (Our favorites are the chicken mole and the poblano muenster.) If it’s smash burgers and fries you’re craving, Grilllove & Oak Hill Grill (near sections 101 and 129) is an option. And it wouldn’t be Austin without an entire food cart dedicated to our unofficial ooey-gooey city food, so the Queso Fountain ensures no one leaves without a taste of heaven. 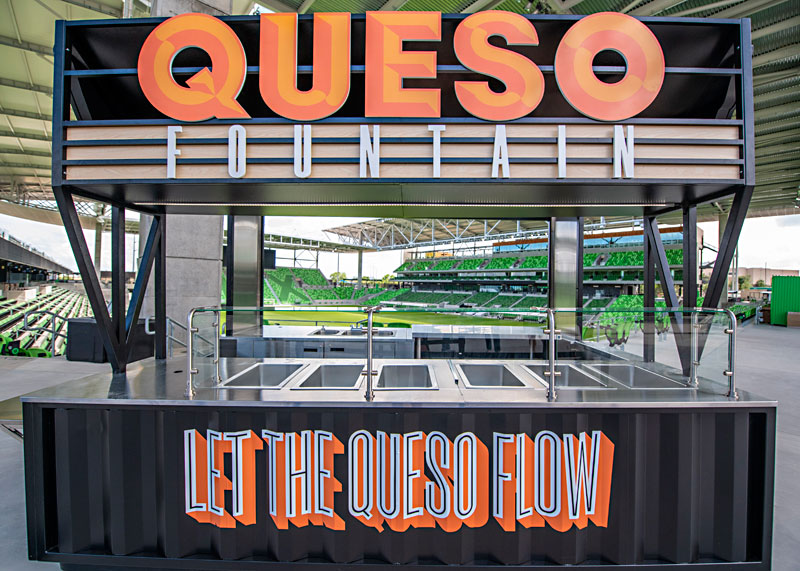 Of course, there is beer, beer, everywhere, because for a vast majority of fútbol fans, match day means gallons of beverages available all over the premises, and Q2 delivers – in the Beer Hall, bars, kiosks, and vendors slinging drinks in the stands. The Q2 Stadium Beer Hall (on the 200 level of the North Building) is marked with an oddly tiny sign (maybe they’re preemptively preventing a melee?) and features a 16-tap draft list of local craft beers. Anyone with a ticket can hang in the hall and watch the game from any of the kazillion screens, but get there early if you want any shot at the single shuffleboard and foosball tables. The brightly lit bar has around 100 keg lights overhead, and the long bar tables feature the natural oak seen throughout the stadium. (See Eric Puga’s “create your own beer adventure” piece for more about drinking in and around Q2.) 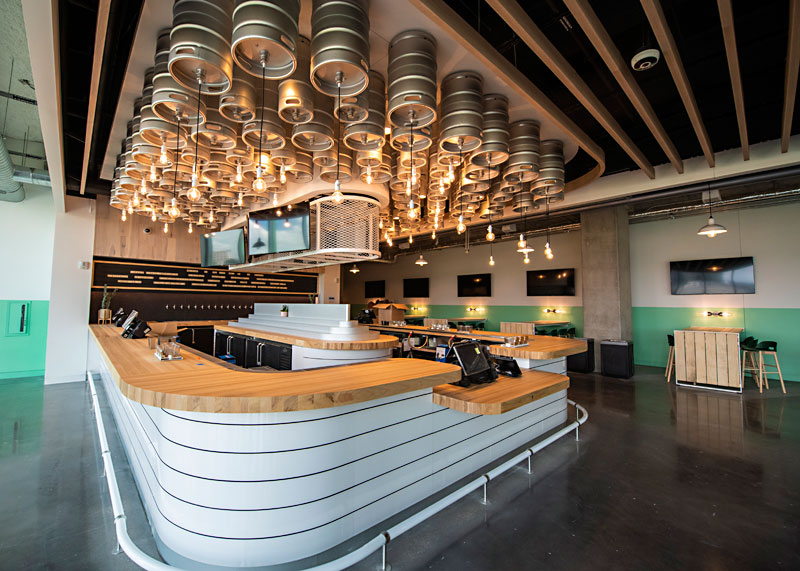 If the big distro players are more your style, there are two Michelob Ultra Bars and multiple portable spots, a Bulleit Bar (on the Porch), several locations for Heineken, Dos Equis (hello, $15 cans), and Bud products, among others you can probably guess. Captain Morgan has a fancy limited-access lounge, and both Crown Royal and Don Julio make a big presence throughout the stadium, as do those liquid gold (brown) syrups, Dr Pepper and Coca-Cola. More interesting, coconut water-based Bodyarmor stands in for the usual Gatorade, and even better, Austin Eastciders and Waterloo Sparkling Water are squeezed into the mix.

Operating in an almost post-pandemic era, throughout the stadium will be cashless ordering and checkout, plus those grab-and-go markets on the concourse. You’ll also be able to order concessions through the Austin FC app, which means no matter where you are in Q2, you’ll be well fed and watered.

About halfway through our tour of the massive property, I was surprised to feel at home in such a concrete jungle, and that’s largely due to the feeling that Austin hospitality is at the heart of this new adventure.