How Gensler architecture's home for the Verde keeps it green 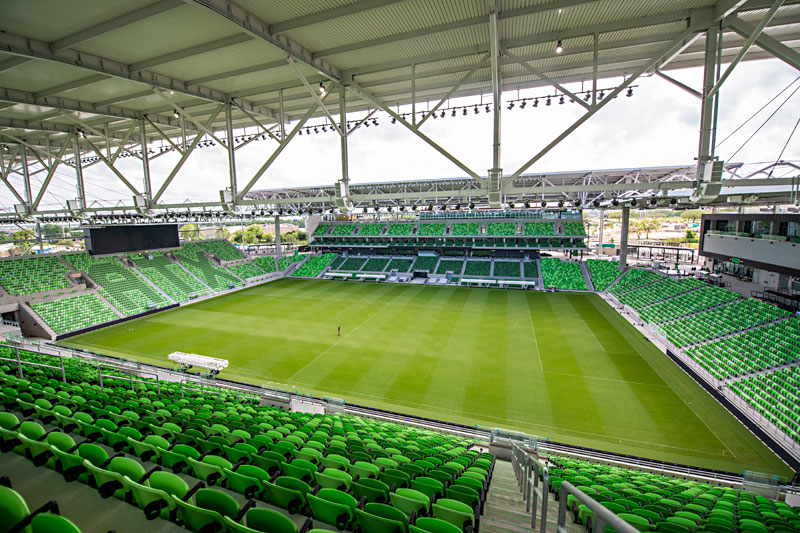 Designing the home stadium for Austin FC was not, shall we say, Jonathan Emmett’s first rodeo. Prior to serving as lead architect for Q2 Stadium and St. David’s Performance Center (Austin FC’s training facility), the principal and design director for Gensler’s Austin office designed the Banc of California Stadium for Los Angeles FC. That project was more than a little similar to the one here – new MLS team, urban site, open-air facility, 20,000-plus seats – so Emmett had some strong ideas about how to approach the Austin stadium.

But any architect will tell you that every project is its own beast, even if it closely resembles another. So while it’s true that Emmett had designed an MLS stadium before, he hadn’t designed one in Austin. Banc of California Stadium was built on the site of the old Los Angeles Memorial Sports Arena in the city’s culturally rich Exposition Park. Q2 Stadium, on the other hand, would be built on the graveyard of a 1950s chemical plant that was abandoned after an explosion in 1985 – quite a different proposition.

Then there’s the ATX heat. Angelenos rarely see the mercury creep above 90 come summer, while Austinites consider it balmy if the summer temp stays below the century mark. That’s worth taking into account when working out how to make a stadium appealing to a potential fan base for whom “football” means the brown thing with the stitches on top.

And just what does football – okay, soccer – mean to Austin? How does a professional soccer club embody the city? Can you build Austin an MLS stadium without knowing that?

That’s all to say Emmett was confronted with some distinct differences in designing a stadium for the Texas capital. But don’t think he didn’t love doing it.

The journey to the stadium making its home at McKalla Place is a saga all its own, one that involves a series of proposed sites around town, including a highly unpopular one on Butler Shores by Barton Creek. Suffice to say that once ownership group Precourt Sports Ventures settled on McKalla as its site of choice and the city, which had acquired the vacant property in 1995, declared it viable, Emmett and his Gensler team had to figure out the best way to rehabilitate a brownfield site with a sports venue. Photo by David Brendan Hall
Fully one-third of the site is devoted to green spaces – open areas, trails, an amphitheatre – that can be accessed before the game, after the game, when there is no game – anytime.

When you approach the completed Q2 Stadium from Burnet Road or Braker Lane, you can see that the architects took their cue from Austin FC’s sense of hometown identity: There’s green space – much more than you’d expect around a major league stadium. Emmett says, “One of the criteria we were given early on as a design team [was that] we really needed to leverage that 24-acre site beyond being a vessel for playing and watching soccer.” That led to devoting fully one-third of the site to green spaces – open areas, trails, an amphitheatre – that can be accessed before the game, after the game, when there is no game – anytime. “It’s not fenced off, it’s not closed off, it’s not just a big parking lot surrounding a venue that nobody wants to go to,” Emmett says. “Some people have questioned whether we have enough parking on-site. We have very limited parking on-site because we wanted to create these green spaces rather than just pack as many parking spaces onto the site as possible.”

Keeping it green is how this soccer club ultimately chose to represent itself as an Austin soccer club.

“I think from day one, the ownership team understood that this is a city that really relates to its outdoor spaces – I mean the beauty of the outdoor spaces here but also the way [Austinites] live their lives,” says Emmett. “There’s a desire to be out there – the hike and bike trails, the parks – that’s almost synonymous with Austin culture.”

You see that in the team’s badge and colors – the “Bright Verde” Pantone 354-on-black image of two intertwining live oaks with roots spreading in four directions – and now you see it in every area of the stadium: the exterior signage, interior signage, lighting in the team locker room, and all 20,500 seats. “We wanted to make it feel like when you’re in the venue, when you’re in your seat, you’re still a part of that indoor-outdoor experience,” Emmett says. “Working with the multiple greens, we’ve been able to blur those lines a little bit. The green of the seat, it almost feels as though the field just works its way up into the seating bowl. It’s been a joy to work with that brand, with that color palette. There’s just such a clear reason for that brand, such a strong reason for that color palette. Being able to integrate that into the architecture and the design makes my job easy.”

Getting you to feel like you’re still a part of that indoor-outdoor experience in your seat isn’t just a matter of decor, though, when your stadium is open-air. At Q2, those Central Texas elements will be with you from kickoff to final whistle – only they may not be as hot as you’d expect. “One of the first things that we heard, loud and clear, both from the ownership team of the club but also directly from MLS all the way up to Don Garber, the commissioner, was that we’ve got to get this building right in terms of the climate,” says Emmett. “This is the absolute most important thing. It’s a big decision, in terms of bringing a club to Austin. If we don’t get that right, we’ve failed.”

Consequently, the architectural team studied the location, modeled weather patterns, and applied proven design techniques to mitigate the ATX elements at their worst. The orientation of the venue on the site, supersizing the canopy roof, opening the corners, raising the building out of the ground, adding 6,000 cooling mesh fabric seats – “All of those were very conscious decisions to address climate,” says Emmett.

This reporter had an opportunity to test their work on a late-May afternoon doing its best impression of a dog day in early August: cloudless sky, scorching sun, and little to no air circulating. Outside the stadium, it was 90 going on 100, but inside, it couldn’t have been more pleasant. The combination of shade over almost every seat and cross-breezes from the open corners lowered the temperature in the seating bowl by a good 15 degrees – a report that came as a relief to Emmett. “You never know until you get out there if you’re as successful as you think [you will be when you’re] looking at the computer programs, running the scenarios, and everything. Glad to hear they’re working the way they were intentionally designed to.”

In Austin, a cooler fan is likely a happier fan, but Emmett wanted to do more than provide climate control to enhance local fans’ experience. A lifelong fan of the game, raised on it in the UK, where the smaller venues generate both intimacy and energy among the fans, he’s intent on helping Austinites feel they’re part of the action when they’re at a match. “To me,” he says, “sports is about bringing people together: bringing people together on the field, that teamwork and that chemistry, and bringing the fan base together in a venue, the energy and excitement that creates.” In applying that to the Austin FC stadium, “It was about creating that tight footprint, the cantilevered seating bowls, the roof canopies that really create that intimate environment. That was something we put into place in Los Angeles at Banc of California, and that really resonated with the ownership group here. Banc of California was a game changer of what an MLS venue can be. We took a lot of the lessons we learned there and brought them to Austin.”

Indeed, inside Q2, the steepness of the seating and the upper seats being cantilevered over the lower ones work to give even fans in the back row a sense of being on top of the pitch. (Ditto for fans in the 27 private suites along the stadium’s west side.) In the south section, 3,300 standing-only spaces are reserved for ATXFC supporters, with the roof over them sitting lower than in the rest of stadium, so the noise they make – which will already be louder than what’s made by the rest of the crowd – will be amplified by the metal and reverberate across the pitch. (Take that, visiting club!) And because sports doesn’t just bring people together in the stands, Emmett and his team have equipped the stadium with a number of spots where they can be brought together around drink and food: the exquisitely appointed field club, assorted bars and lounges, and a beer hall that can hold more than 330 fans. (The plethora of food and drink options play to the idea that fans aren’t just satisfied with a quick brewski and boiled hot dog during match play, then it’s back out the gates. The stadium caters – literally, caters – to the philosophy of the stadium as a culinary destination on game day.) And there’s the two-story, 5,000-square-foot Verde Store, selling the merchandise by which fans can show their solidarity with Austin’s new Major League Soccer team.

Neither Austin FC nor Emmett and the Gensler team ignored the fact that Austin is a live music town. “If we’re not acknowledging that and embracing that and bringing that into the venue, that’s a missed opportunity,” Emmett says. That supporters section? Its seats were designed to be demountable, with a concert stage in place underneath it. Above it is a massive rigging grid, and behind it are multiple loading docks, all to streamline production load-ins and load-outs. “It was a very important criteria for us to design a venue that allowed for the most seamless transition from soccer to concert,” Emmett insists. “Music is a very important aspect of this project.”

Still, the architect will tell you, first and foremost, this is a stadium built for soccer. After having spent some time in it, I can vouch for that. I’d suggest, though, that this is actually a stadium built for making people fall in love with soccer. And since Jonathan Emmett is very good at his job and this is not his first rodeo, get ready to lose your hearts, Austin.

Keep up with the Austin Chronicle's Austin FC coverage, including Eric Goodman's weekly column, The Verde Report, at our Austin FC landing page. 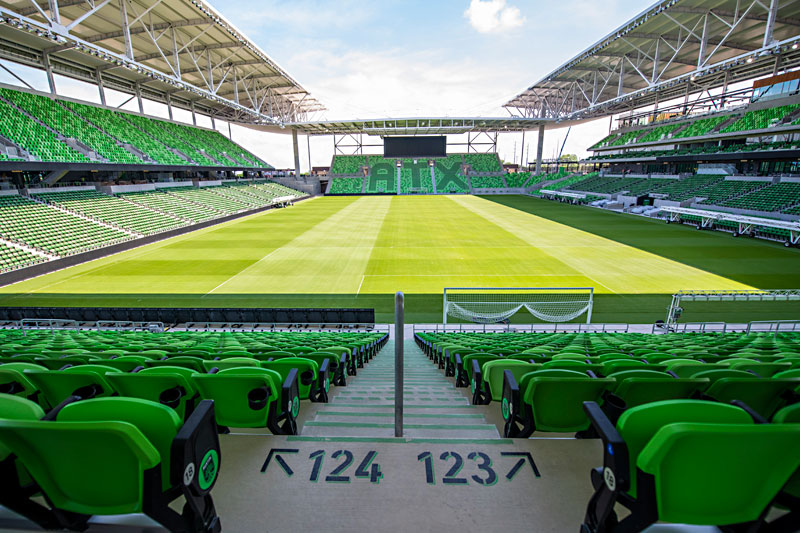 Q2 by the Numbers