Forget Decorum: Music Fans Holler Their Appreciation for the Symphony 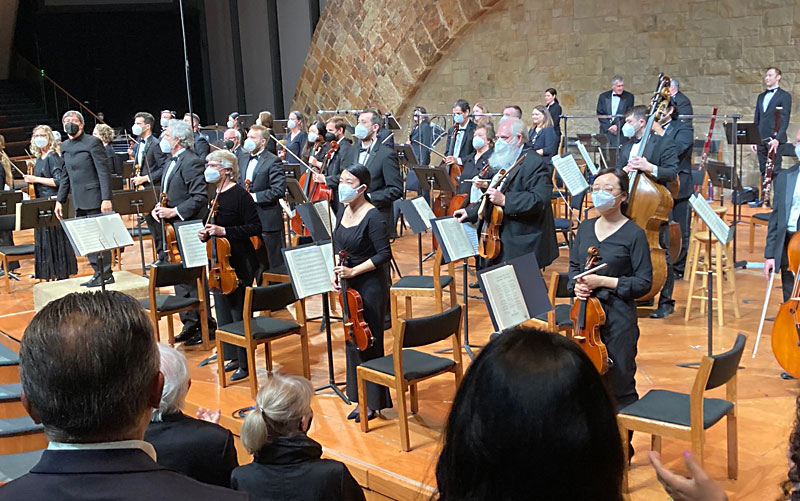 Austin Symphony Orchestra performing on May 13 (Photo by Robert Faires)

If you're a classical ensemble returning to live performance, nothing says "We're back" like a fanfare: blaring brass and thundering timpani flooding the concert hall with big, glorious sound. That's certainly how it felt when the Austin Symphony Orchestra took the stage at Riverbend Centre on May 13. Opening the first concert with an in-person audience in over a year with the orchestra's loudest instruments leading the way was a canny move on the part of ASO Music Director Peter Bay. It guaranteed that every person present would immediately be able to tell the difference between the music we'd been hearing through speakers for the past 14 months and music heard live.

And oh, how it worked: My ears filled up with sound in a way I'd almost forgotten about. (Sitting directly in front of the trumpets and trombone no doubt helped with that.) I knew I'd been missing ASO's live concerts – as I'd been missing live chamber music concerts and live theatre and live dance – but I'd lost touch with just what I was missing until those first few minutes of big, unfiltered music brought it back to me in a rush. And with each piece on the program, that feeling just grew. José Pablo Moncayo's rollicking Huapango! Dvořák's gentle, melodic Czech Suite! Beethoven's robust, lively, dial-it-up-to-11 Symphony No. 7! Where else but the symphony do you hear music this rich and full and grand – and performed by 50 musicians together! After so much time in pandemic isolation, just looking at all those instrumentalists sharing a stage that night felt like a wonder, like something impossible made real. And here they were, filling the air we were all breathing together (behind masks, yes, but still ...) with the kind of expansive music that sweeps you away. I kept thinking, I so needed this.

Or should I say we needed this? Because clearly, I was not alone. Nearly 800 people made the long haul out 360 to Riverbend for ASO's Moonlight Moods concert. That may not sound that impressive considering the symphony's concerts at the Long Center typically draw crowds upward of 2,000, but in this case social distancing necessitated that ASO cap seating at 35% of the 2,200-seat capacity. So this was actually a sold-out performance, and ASO PR Manager Rachel Santorelli reported there were even people at the box office trying to buy tickets that night – all of which points to the symphony crowd being eager to get back into the concert hall.

Now, inside the hall, the crowd's enthusiasm about being back at a live concert wasn't always that evident. As a rule, ASO audiences tend to be, let's say, polite. So when the music was playing, everyone was very quiet and very still. And most faced the stage with focused, even determined looks. You had to wait until Bay lowered his baton at the end of a selection to get a sense of the audience members' excitement, which took the form of energetic and sustained applause. Better than that, though, was after the Beethoven ended, when it took only seconds for them to jump to their feet in appreciation of the orchestra's efforts. And they kept the applause going for so long that Bay had to return three times to take a bow. I'd wondered how long it might take the ASO faithful, with its significant percentage of older and somewhat conservative patrons, to get back to their seats once live performances returned. That night, the answer came, as loud and clear as a fanfare: No time at all.

Find more cultural events, in person and livestreaming, in our Arts Listings at austinchronicle.com/events/arts.

COVID-19, classical music, Austin Symphony Orchestra, getting out there