Where beer and soccer intersect

Domestic American soccer sounds about as appealing to a footyphile as domestic American lager does to the craft beer crowd. Between the two groups, an elevated, artisanal experience is necessary in order to enjoy the product in its purest art form. Yet in its truest form, the American soccer experience is filled with a million underdog stories, stunning little homegrown victories, and the spirit of connecting with our European and Latin roots – just as in the craft beer universe. To say that the American soccer mentality (read: Major League Soccer, not the fellas flopping about across the pond) aligns with American craft beer culture is to say that something as uncomplicated as a grilled cheese can be aligned with something as hoity as carrot ginger bisque.

Right here in Austin, local breweries have begun to affiliate themselves with these supporters of the town’s first big league club in an effort to merge that same rabid passion, inextinguishable energy, and fierce loyalty as displayed by fans of local beer.

“One thing I love about both soccer and beer, is that they provide instant conversation with so many different people across cultures all over the world. And people are fiercely loyal to their local clubs and breweries.” – Derek Ensign, Los Verdes

To understand the world’s game is to understand its drinking culture. In England, its birthplace, prematch visits to the neighborhood pub are strictly requisite to maximize the effectiveness of the supporters’ debilitating chants set to the catchy pop rhythms of Blur or Robbie Williams. But an English football fan cannot drink in view of the match itself, only on stadium concourses. In Germany, however, the Bundesliga has remained strictly fan-driven thanks to its 50+1 rule which allows clubs to be governed more by its fans than mega-corporations, ensuring ticket prices remain low even for the biggest matches. Perhaps more importantly, the rule allows for drinking in full view of each match from the seats. And yet in places like Buenos Aires, alcohol in and around the stadium is banned for a several mile radius altogether on match day, though the most ambitious of Porteños will find ways to sneak legendary amounts of weed into Estadio Monumental.

Then there are the Americans, whose sports culture has conditioned us to linger in a parking lot while shotgunning flavorless American light lagers for effect and not for character. The Beautiful Game demands more: an English bitter, a German pilsner, heck, a Mexican lager that replenishes the body like a 5-hour Energy. Those are the types of sauces that get the diss tracks flowing.

“People don’t like soccer because it’s rough and tumble or high scoring,” posits Josh Babetski, founder and president of Austin Anthem, Austin FC’s original supporters’ group. They’ve done a collaborative golden ale with Circle Brewing and helped design an absurdly dashing soccer scarf along with Austin Beerworks. “It is the elegance of the game, it is the beauty of the footwork, it is the strategy. When someone no-look passes to someone else from 20 yards out and you’re like, ‘How did that just happen’? I think that same kind of audience certainly appreciates small breweries taking time to really put that same kind of effort into their own product.”

Both MLS and craft beer have demonstrated steady market growth in each of their disciplines. MLS doubled from 15 clubs in 2009 to a planned 30 teams by 2023 with television ratings improving each year since 2012. Likewise, craft beer’s trajectory saw similar leaps in scale, vaulting from only 1,511 breweries in 2007 to 8,764 by the end of 2020, according to the Brewers Association. Millennials meanwhile – an important, diverse, and seemingly exclusive demographic for MLS – account for 35% of all beer consumption in the U.S. and, according to Nielsen, are 26% more likely to drink a craft beer than the average American beer drinker. That generation is only outdone by Gen X, which drinks only 21% of all beer but is 28% more likely than the average beer drinker to grab a craft beer according to the same survey. Both groups are extremely promising growth markets for small beer and MLS, and that’s even before considering older Gen Z-ers, who are now of drinking age.

In short, MLS and craft beer are two former cultural outliers that are getting their foothold in valuable markets like young urbanites and suburban families. Several MLS clubs have gone as far as to join with an official craft beer partner in their respective regions: Minnesota United FC coordinated with Surly Brewing on Rising North, a pale ale; LA Galaxy paired with California craft giants Firestone Walker; newbies Nashville SC hugged up with fellow Nashvillians Fat Bottom Brewing. While Austin FC hasn’t approached that level of small beer partnership just yet, the club does plan to host 16 taps inside their own north-end beer hall inside Q2 stadium with an oft-rotating range of local handles. And some stadium-area breweries may find it more convenient to cater to the fervent supporters’ groups outside the stadium itself.

Where Beer and Soccer Intersect

“When we did that first beer collaboration with Los Verdes [another Austin FC supporters’ group], we did a Mexican lager and that was sort of their choice [of beer style],” recalls Greg Henny, taproom & general manager at Hopsquad Brewing. “That beer really drew us together. It’s a beer that we all envisioned drinking together on game days out here [at the brewery] or at a tailgate [party]. So that’s kind of how that happened. [Los Verdes] kept drinking us out of it, so we decided that we’re always gonna have to double brew that one.” In anticipation of the first several weeks of the season, Hopsquad doubled the production of Zapatista to 15 barrels, which is also double the amount of any beer they brew in the entire facility.

“One thing I love about both soccer and beer, is that they provide instant conversation with so many different people across cultures all over the world,” posits Derek Ensign, Starting XI board member of Los Verdes. “And people are fiercely loyal to their local clubs and breweries.” Ensign says that when he and his wife are picking vacation destinations, they often do so where beer and soccer intersect: “[We visited] France for the women’s World Cup [and] Belgium to experience their incredible beer culture.” Ensign hopes to bring that cultural alignment between beer and soccer back home, noting that the group is working with all seven breweries and Fairweather Cider Co. for a “stadium district” collaboration that would support a local charity beyond supporting the breweries on match days.

“We had to find a way to become a part of all this,” reflects Joel White, marketing director at Circle Brewing. “Mostly we wanted to create a cool atmosphere for the supporters of the team to come to prematch, during the match, and post-match.” White notes that the brewery intends to take over their own parking lot with a “festival-type atmosphere” including projectors, food trucks, music, and naturally, their very own “supporters’ group” beer. “We reached out to Austin Anthem and said, ‘Hey let’s do a brew together.’ It was a good way to connect ourselves to their community and let them know we too support the team.” Circle’s Austin Anthem beer, with its slick can art, is a lightly hopped blonde ale sitting at a pitch perfect 4.9% ABV. White adds, “It’s a perfect match day beer.”

“It was a good way to still kind of be in that universe of Austin FC [while not actually being officially endorsed by the team],” notes Babetski. “Like satellites orbiting this big club. We’ve really lucked out in finding people that are really passionate and aligned with how we’re thinking about supporting our community.”

True, soccer isn’t a chuggable sport. It takes patience and an eye for subtlety to appreciate. Flaws aren’t easily hidden. It develops, and then it rewards. Fandom is rabidly territorial. All of the parallels to craft beer are just too conspicuous. Now that soccer is relatively ingrained into mainstream Austin vernacular, it’s time to finally partake in the fan experience. Local Austin breweries appear to have stepped up to the challenge.

“Soccer fans like to drink,” Babetski emphasizes. “So that relationship works out really well.” 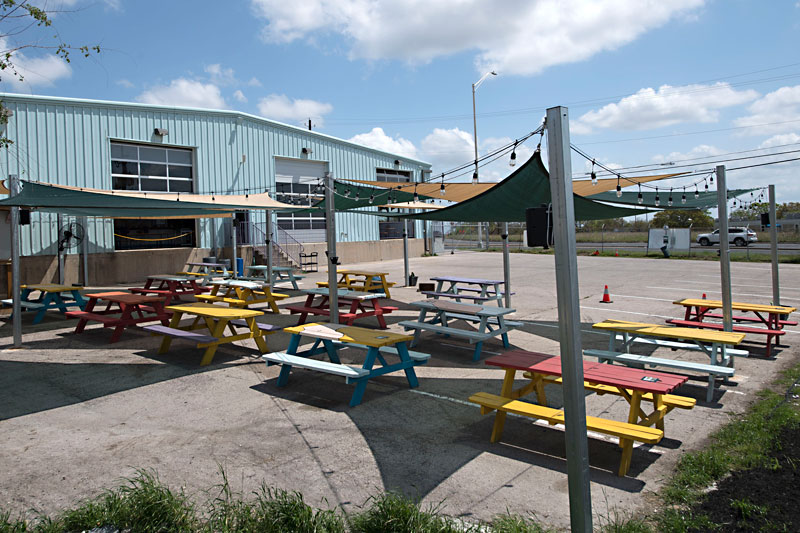