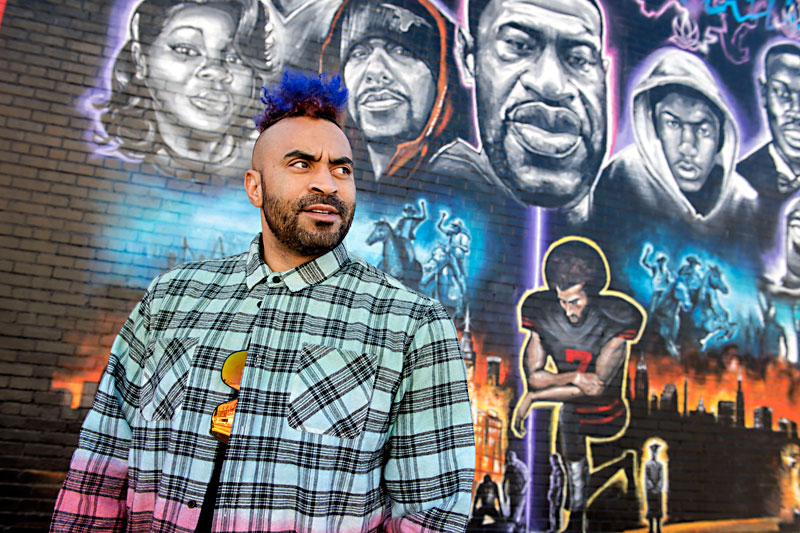 Prolific local artist Chris Rogers speaks often about his progress and success in recovery and has related substance abuse disorders to the disease of racism: You can't begin to heal until you acknowledge there is a problem. Rogers said that following George Floyd's death in late May, something died in him as well: the fear of making waves. So he quickly began work on a poignant mural on East Fourth Street, If HE Can't Breathe, WE Can't Breathe, designed to do just that. Inspired by a goal to spark conversation and action, it depicts the faces of Floyd, Ahmaud Arbery, Eric Garner, Tamir Rice, Trayvon Martin, Breonna Taylor, and Austin's Mike Ramos, with Colin Kaepernick somberly kneeling below them among scenes of police violence and intimidation. Chris Haywood's short film "Hashtags & Halos" shows how the mural brought a middle-aged white conservative woman who admittedly "didn't get" the Black Lives Matter movement at first into a dialogue with the artist, and they spoke openly about how she had initially believed Kaepernick's actions were disrespectful of the troops and the flag. Rogers listened without judgment and asked, "What if we could all have conversations like this all the time?" That's why we need artists like him, to confront us with uncomfortable truths, to spark dialogue, to help us face the disease so healing can begin.