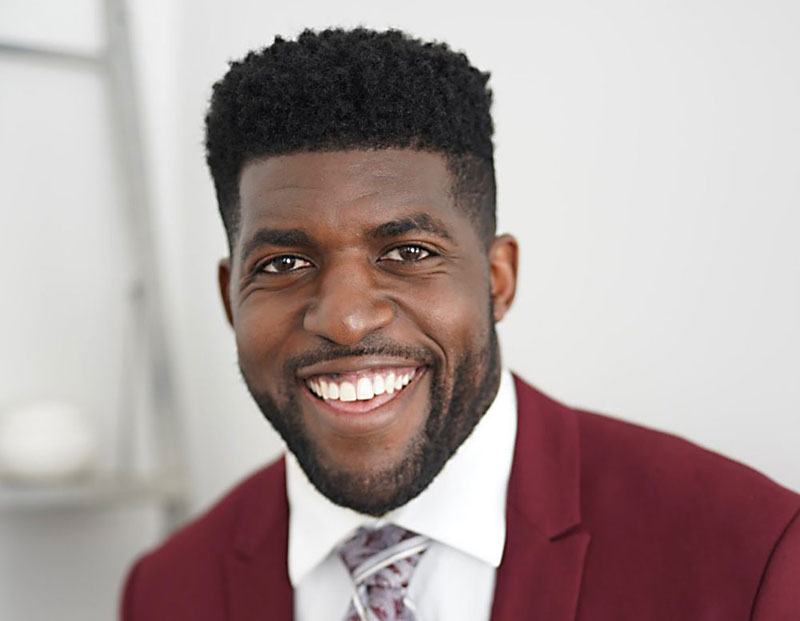 Emmanuel Acho wants to talk. "Consider this a safe space to educate yourself," explains the former Longhorn linebacker and NFL player in his first episode of the viral series Uncomfortable Conversations With a Black Man. The series, which has garnered tens of millions of views, was created by Acho in the immediate aftermath of the murder of George Floyd and the ensuing mass protests for racial justice. His project has a specific target audience in mind: white people eager to become allies who want to learn more about racism. Since June, he's hosted close to a dozen conversations with guests such as NFL Commissioner Roger Goodell, Matthew McConaughey, and Chip and Joanna Gaines, though some of the most remarkable dialogues have been with less famous guests: officers from the Petaluma Police Department, white parents and their adoptive Black children.

Each conversation is illuminating, but it feels wrong to describe any of them as uncomfortable. As host, Acho is remarkably patient and generous. No question – even one as rudimentary and incendiary as, "Why can't white people say the N-word?" – is dumb to him. What makes Acho willing to be so understanding? "I fervently believe," he explains, "that if the white person is your problem, only the white person can be your solution." A cynical viewer might ask if Acho's white audience deserves this level of grace. Maybe they don't, but maybe that's not the point either. Acho isn't looking to even the score; he's looking to build bridges. In a year as painful and divisive as this one, his work gives us a framework for genuine, loving engagement around difference. He's showing us that something as elusive and complicated as national healing might start with something as simple as a conversation.

20 in 2020, Emmanuel Acho, Uncomfortable Conversations With a Black Man