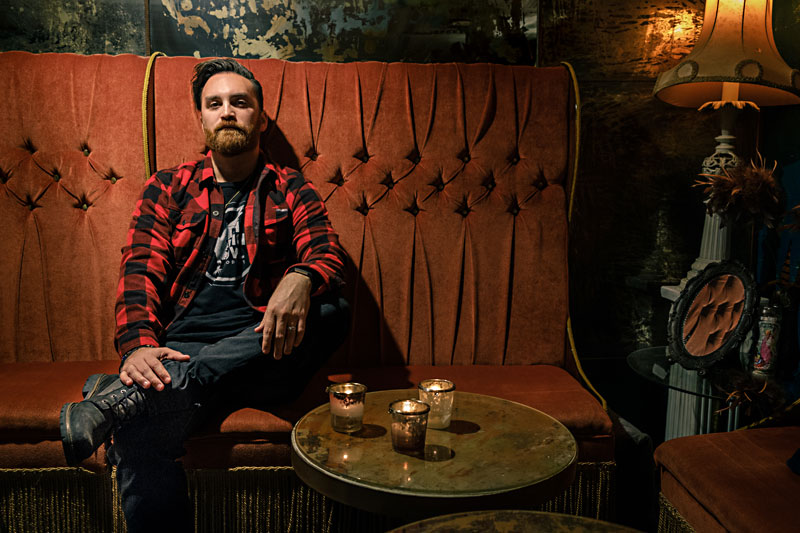 Stephen Belyeu of The Night Owl (Photo by Bret Brookshire)

"The little boy likes to touch people." That's no regular child that Stephen Belyeu is describing, but one of the ghosts reported to haunt Jourdan-Bachman Pioneer Farms. "Several of the guests said that they were grabbed by the hand, which he typically likes to do." It's one of the stories the 36-year-old paranormal investigator and host of local Austin haunted podcast The Night Owl explores in Ghosts of Pioneer Farms, his latest exploration of Austin's uncanny history.

The socially distanced, self-guided audio tour of Pioneer Farms is the newest flight for Belyeu's award-winning audio series investigating haunted businesses and eerie goings-on in and around Austin. Like the show, the guide takes listeners in search of the otherworldly, and with eight reported sites of spirit activity, Pioneer Farms is a perfect place to go ghost-hunting. Belyeu described it as "really special just because of the energy there – when you go it just feels like you're stepping back in time."

Belyeu began recording The Night Owl three years ago in 2017, but the paranormal investigator has been interested in ghost stories for as long as he can remember. "I love horror culture, the spooky culture," he said. He grew up in the unincorporated South Texas community of Pawnee, "a small town that had a lot of folklore and legends, a lot of Hispanic folklore as well." Growing up deeply religious ("I was an altar boy for 11 years of my life," he laughed) he doesn't feel his background in Catholicism is at odds with his passion for the paranormal world, "I still believe in God, but to me, any type of religion, it's about an afterlife. So I don't think spirits are excluded in that."

The podcast host rejects the traditional Ghostbusters tropes by instead focusing on mainly local individuals' experiences and locations' stories. "A lot of the films I grew up watching had moments where these people would come in with gadgets and video cameras, but if you listen to the show, I don't ever use devices." Instead, Belyeu relies on firsthand accounts from witnesses, as well as perceptions from clairvoyant Sara Reeves and spiritual practitioner Alexis Arredondo, and a detailed historical investigation (researched by his father, Sam, the show's head historian), plus photographs by his wife, accomplished photojournalist Thao Nguyen, to craft a compelling episode.

The Night Owl makes a pointed effort to seek out those haunted locations in Austin and the surrounding area that are obscure, "I want to find those hidden gems and those unique stories that haven't been uncovered yet. That's kind of like my dream." Belyeu stressed. While there are episodes on famously unquiet locales like the Clay Pit and the Tavern, the podcast has explored little-known ghost tales at local Austin joints like Elysium and Spider House Cafe. The stories have attracted a global listenership, and Belyeu has not ruled out letting The Night Owl's wings spread globally. "I'd love to be going out and featuring places all over the world. I'm hoping one day I can step away and do the podcast and storytelling full time. But right now I love Austin."

Ghosts of Pioneer Farms is available at www.thenightowlpodcast.com/gopf ($15, plus admission to Pioneer Farms) or you can join the team on location for the Un-boo-lievable Pumpkinfest (Sun., Oct. 25) or an overnight Ghost Campout (Sat., Nov. 21). Tickets and info at www.pioneerfarms.org.

Do you have ghosts in your office? Spooks in your place of work? Reach out to The Night Owl at www.thenightowlpodcast.com/submit.

A version of this article appeared in print on October 23, 2020 with the headline: The Night Owl Takes Flight