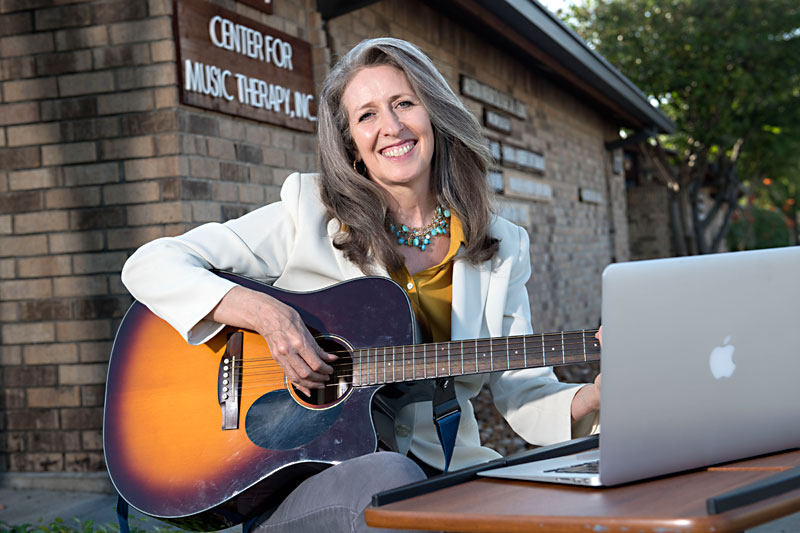 Humans have been making music for at least 40,000 years. Hope Young contends that, throughout that time, controlling stress and anxiety has been one of its most globally pervasive functions.

"It's been essential to the survival of humanity," says Young, founder and president of Austin's Center for Music Therapy. "There are times when our bodies produce stress in order to get us to survive and music can drive that up. We mate to music, we sound a musical alert for fight or flight, and in wartime, music's been used to coordinate and to drill. When soldiers march, they have the chants – like, 'I don't know what I've been told ...' Those are things to bring stress down or handle ramping up and going faster while keeping you calm, focused, and attentive. For healing, the doctors would have them sing to fellow soldiers.

"It's all about your adrenal system," she adds in regards to how music can mitigate stress. "Getting your cortisol levels coming down."

Given the widespread emotional distress associated with a global pandemic that's put distance between social circles and brought economic devastation, Young says the stress-relieving properties of music have become a hot topic. In one week in early September, she took calls from music therapy practitioners and researchers in India, Australia, and Scotland.

"Right now the whole globe is really heavily turning to music to get through the anxiety and social isolation of this pandemic," Young says.

Locally too, increased interest has energized the Center for Music Therapy to expand their offerings of group sessions that focus on anxiety relief and quality of life. Young notes that these virtual classes are for helping and healing as opposed to clinical treatments – which involve more personalized therapy that can go deep into the individual's past.

"For all these people whose souls are heavy right now and they're having weird dreams, it's not quite enough that the music's there to listen to. Everybody's wanting more," she says, differentiating them from clinical cases. "They're not suicidal, they're not clinically depressed, they need more specific tools to address, 'How do I get through this today to get to the other side?'"

Young explains that the sessions include relaxation practices in which participants learn breathing techniques that sync up with live music played by the therapists. Those musical exercises focus on tension relief and progressive muscle relaxation and include some light imagery – for example: "Imagine your favorite color in a ball of light, let it go into different parts of your body" – and guided imagery to a nature scene.

Improvisation also factors in, with the group expressing themselves through musical phrases that build atop each other. Additionally, Young says songwriting serves as an important tool for stress relief in a class setting – and they make it easy for non-musicians.

"We have tricks to help them fill in blanks – different chordal systems to let them get across what they're feeling," she explains. "We'll ask, 'What's the right rhythmic tempo? What are we trying to express? What's the main theme?' We have ways to do this as a group and everybody has their own part. In the end, we'll create an affirmation of what we want to leave with."

Young admits the songs aren't always joyful at the onset – and that's okay.

"You can't always just make a song happy. It doesn't work. If people are pissed, if they're angry, you need to start there and don't pretend your way out of it. Then we move through that and let the song build to the place where you want to go. It's a shared experience and it makes you believe you can create the world you want."

A 2013 study titled "The Effect of Music on the Human Stress Response" found that, among a test group of healthy female participants, listening to the choral piece "Miserere" by Italian composer Gregorio Allegri prior to a stressful task made their body's return to baseline cortisol levels faster compared to the same experiment without music.

Don't do breathing exercises to music that you might have a prior and potentially negative association with – for example, a classical piece that's been used in war movies. The Center for Music Therapy uses live, original music for classes – breathing in on an arpeggiated scale and out when the music goes down.

A version of this article appeared in print on October 2, 2020 with the headline: What the Opposite of Anxiety Sounds Like