Giving praise before the altar of the turntable 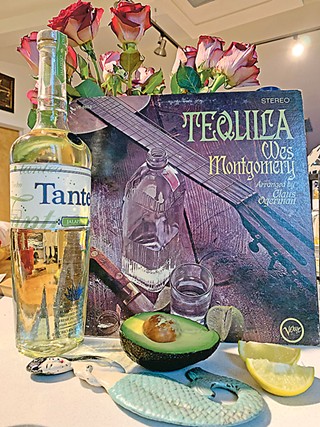 Newly ambulatory, Lazlo leveled up to the turntable – perfectly positioned for someone two-and-a-half feet tall.

"Watch, okay," I leaned down. "When I press this button, the tone arm will go up, swing over, and touch the needle down on the record. Then, out of the speakers, comes the music."

Sooseck's paramount at our house, so weeks later when I arrived home and inquired about the mothership and satellite, everything ran down in order until the final item:

"We tried to play a record, but I couldn't find anything in your stack on the floor."

People talk about out-of-body experiences, and indeed, once EMTs jolted me back to life, I woke a changed man. Nothing returned to "normal." Starting that night and consuming every waking moment of the next five years, my soul blazed with a born-again, missionary zeal – raged inside a burning ring of fire.

A spirit pledged to one lone God and quenched by the Holy Spirit herself: Vinyl.

I Told the Witch Doctor

My mother bent down and pulled the tiny turntable out of the suitcase stereo. Androcles and the Lion, a record reliving the Oakland A's 1972 championship season, and Alvin & the Chipmunks wiseacre David Seville's The Witch Doctor – my kindergarten equivalent to Pink Floyd's Dark Side of the Moon logging 917 weeks on the charts – all followed (explore "Greener Pastures," Summer Fun, May 10, 2002).

Tom Petty & the Heartbreakers' sublimely broken Southern Accents and Iron Maiden's radioactive Live After Death arrived in record mailers at the school newsmagazine, but they were carted off to market as well during a post-grad High Fidelity stint that yielded the entire Thin Lizzy catalog. Happily, vinyl grew in abundance in and around the foothills of Nineties Austin. DIY pressings of Butch Hancock populated Antone's Records, while a future $400 Johnny Hodges box set sold for $40 at Sound Exchange on the Drag. Charlie Parker melted the alto sax, but Hodges poured the brass.

Even so, I knew naught of The Most Fabulous Object in the World™.

Are You Ready for the Country

Waylon Jennings hogtied me to the vinyl renaissance faster than you can say Neil Young.

Neither as groundbreaking as his Billy Joe Shaver songbook Honky Tonk Heroes, nor as undervalued as its Willie Nelson-heavy follow-up This Time, 1976's Are You Ready for the Country took its title from Young's Harvest and leads with an outlaw appropriation for the ages. Turns out that while cool kids obsessed over Record Store Day variations, classic country platters sold for a song: Patsy Cline, Loretta Lynn, Wanda Jackson, Dolly Parton.

Naturally, once inside any vinyl den, product literally flew off the walls into my canvas SXSW sack, including Muddy Waters' silky Folk Singer and Fear of God II: Let Us Pray from one the blues sovereign's best hip-hop inheritors, Pusha T, at Waterloo Records, and a Mobile Fidelity master recording of Dark Side of the Moon at End of an Ear. (Grab that Beyoncé B'Day and $5 Kool Moe Dee too while in the 78704.) And so it went, round and round and around the bend – over, under, sideways, down – from 2015 until Oct. 1, 2020.

Pandemic, no problem. The day Austin schools closed, Friday, March 13, I stocked up on provisions at Breakaway Records (revisit "Vinyl Saved My Life Tonight: Record Stores Deliver in a Crisis," Music, March 24). When Austin reopened on April 27, Half Price Books proved a distanced goldmine of $1-3 understock, panning out a gorgeous Animals from Pink Floyd (North Lamar), some Trini Lopez in Round Rock and Georgetown after the Dallas crooner passed August 11, and folk slayer Kate Wolf (South Lamar).

Wes Montgomery's triple-shot guitar, 80-proof bass from Ron Carter, and chill percussion by conguero Ray Barretto spikes their 1966 cover of the No. 1 instrumental smash that we once spun at our old house. Tequila Friday originated there with a cache of $4 Jimmy Buffett records from bygone Encore Records. Nowadays, tequila Wednes­day, Thursday, and Sunday all franchise forward.

When a fiscal Sword of Damocles descended on me and the missus in March, we tripled our happy hours. One salary – in part to homeschool our first grader – won't cover the spread. Shot, beer, repeat.

Discogs' online marketplace provided crucial saves out of the bullpen: Wish You Were Here, Madonna sleeper I'm Breathless, Tangerine Dream synth possession Sorcerer, Aussie thrash demon Rebel Wizard (Triumph of Gloom), and a Spanish 12-inch at the bottom of my vinyl bucket list. Not precisely The Most Fabulous Object in the World™ – ultimately revealed as my own composite collection of all the records I'd bought and sold and had stolen throughout my life – but close enough.

Flying down Manor toward our Eastside sanctuary, Lazlo pounds a pair of splintered drumsticks from a Spirit Adrift/Skeleton immolation at Hotel Vegas against the headrest. Argentinian punks Los Fabulosos Cadillacs beat a New Orleans drumline into ploughshares. I sing every word in Spanish at top volume and the kindergartener nails its tribalism like the time the band turned Liberty Lunch into a human whirlpool with the same song.

Palabras don't kill, viruses do. And maybe vinyl really did save my vegan bacon daily since March 13. If so, every record I scrimped, saved, and sweat blood for since that day Agnes couldn't find a needle in the haystack boils down to a 12-inch single of "El Matador."

That's the conversation I hope to have with Lazlo long after I can't do it in person.

Tanteo Jalapeño, $30 No. 1 with a bullet for nearly as long as Pink Floyd's DSOTM.

Clase Azul Reposado, $125 Platinum VIP only with a bottle that looks like a Peruvian Grammy.