There be monsters ... and therein lies the fun 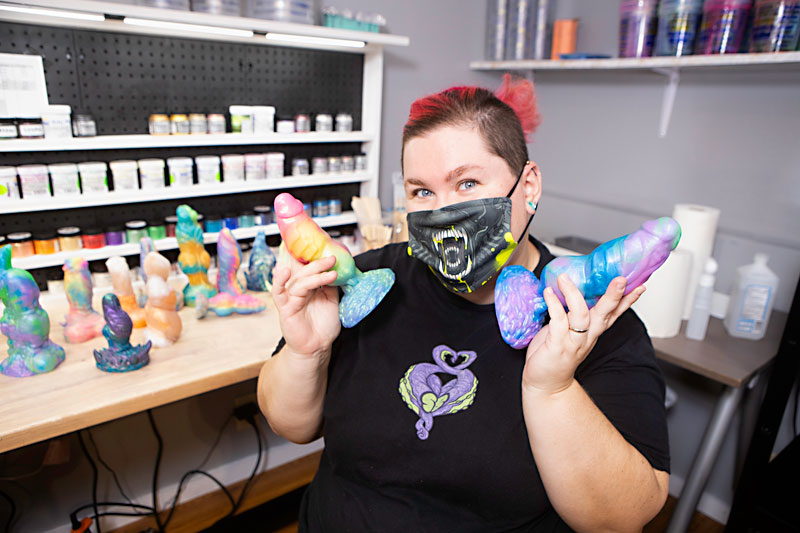 Stress can be a savage beast – think: ruined sleep schedules, constant brain static, and finger-in-an-electrical-socket anxiety – but a local shop is making some silicone beasts of their own who just might help combat that stress in a particularly pleasurable way. Strange Bedfellas, the ATX fantasy sex toy shop helmed by designer Meesh Oglesby Cunningham and a small production team, showcases colorful creatures made to spark the erotic imagination. Their product-drops on their virtual storefront feature the multicolored silicone nether regions of dragons, demons, and werewolves, as well as toppers and sleeves for wand and bullet vibrators to give them a little supernatural flair.

"In this day and age when you can't leave the house hardly ever," Oglesby Cun­ningham says, "it's good to have some friends in your drawer who can spice things up a little bit."

While fantasy sex toys are a relatively recent development in the market, they've skyrocketed in popularity thanks to the internet's amplifying powers. During the pandemic restrictions on person-to-person contact, Oglesby Cunning­ham says that demand for her creations has ramped up, with all sorts of customers both new and old wanting to orgasm away real-world stressors with a silicone werewolf penis or two. (Werewolves, she reveals, are extremely good sellers for Strange Bedfellas – specifically their Tyv model. "We sell more Tyvs than we sell anything else," she says. "It's ridiculous how much we sell that guy.")

But how does an orgasm help to exorcise the stress monster? Multiple studies have pointed to biological reasons for climaxing as an effective stress reliever. When the body climaxes, it releases neurochemicals such as oxytocin, dopamine, and endorphins, which give you a natural sense of euphoria. This in turn helps to relax tense muscles – releasing them from the jaws of stress and making restful sleep easier ... and perhaps even paving the way for some exciting dreams. Orgasms can also help with the little demons of stress headaches: Recent research found that following an orgasm, many subjects showed elevated blood flow to all parts of the brain, which brings oxygenation as well as nutrients.

Fantasy sex toys can add an extra layer of erotic satisfaction by bringing a little escapism to the table. Oglesby Cunningham traces her own love of monsters back to the creature features of her youth – including Alien and the Nineties cartoon Gargoyles – and the worlds they transported her to. By combining that supernatural inspiration with her artist's understanding of anatomy, she develops toy designs that are fun to use and also unique – a big selling point for a collector's business like sex toys. "We have people who buy the same toys over and over again," Oglesby Cunningham says. "Same toy, same model, same size, over and over again. This is not a business that is niche in a way that you would think." (From personal experience, this writer tried to buy a Strange Bedfellas' product about five minutes after the initial drop time, and by the time I entered my credit card info and pressed "Purchase," the product had sold out.)

But Oglesby Cunningham also points out that for a lot of her customers, some of whom might have body dysmorphia or issues dealing with humans in sexual situations, being able to go into a shimmering monster fantasy can be their best way of reaching climax. "[For them] it's definitely like, 'I can go into this other headspace. I don't have to think about these things that make me nervous. I can just have fun up here.'" 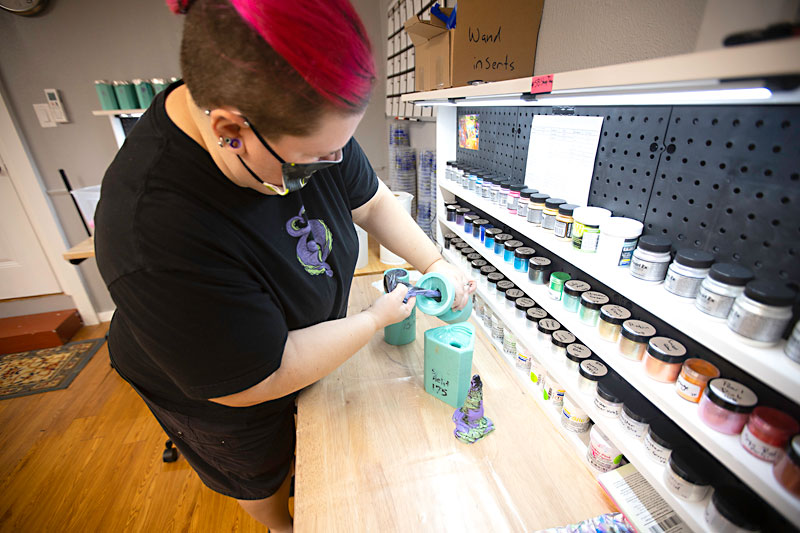 Oglesby Cunningham counts her crew as lucky for the lack of manufacturing hiccups they've encountered during quarantine. It helps that the silicone they use to fill their molds is body-safe platinum-cured silicone* and their supplier was also an essential business that kept shipments coming to their in-home workshop (unlike the mica they use for color, which did experience a brief manufacturing slow-down). Using safe materials is of the utmost importance for Strange Bedfellas. (Their products were sold in the late Q Toys brick-and-mortar, owing to the owner's commitment to keeping body-safe toys on their shelfs.)

Fun factors heavily into the creation of Strange Bedfellas' host of friends, even coming before whether or not the toys will fit. "I mean, everything's going to fit somebody. That's sort of the last thing you think about. But is this going to be something that a majority of people will have fun putting into themselves?" Straying from mainstream shapes, veering into the realm of horns and scales, gives fantasy sex toys a little edge over their more plain counterparts since, as Oglesby Cunningham points out, there's only so much one can riff off of just anatomically correct silicone. For that reason, the fantasy sex toy market is considered a bit of a collector's market: "Five different shops can have a toy that is very similar in shape and will do the same thing mechanically, but they're all different. So there's a reason to maybe have five of them in your workshop or in your collection."

*Editor's Note: An earlier version of this story said Strange Bedfellas uses medical grade silicone, which was incorrect. The story has been updated to reflect the correct information.

In some cases, frequent orgasms have been shown to increase one's pain threshold.

Make sure to sanitize sex toys after use with hot water and soap. If your toy has mechanical parts, wipe it with isopropyl alcohol and then a slightly damp towel.

A version of this article appeared in print on October 2, 2020 with the headline: There Be Monsters ... and Therein Lies the Fun