A cross-country trip to unite a family in the pandemic 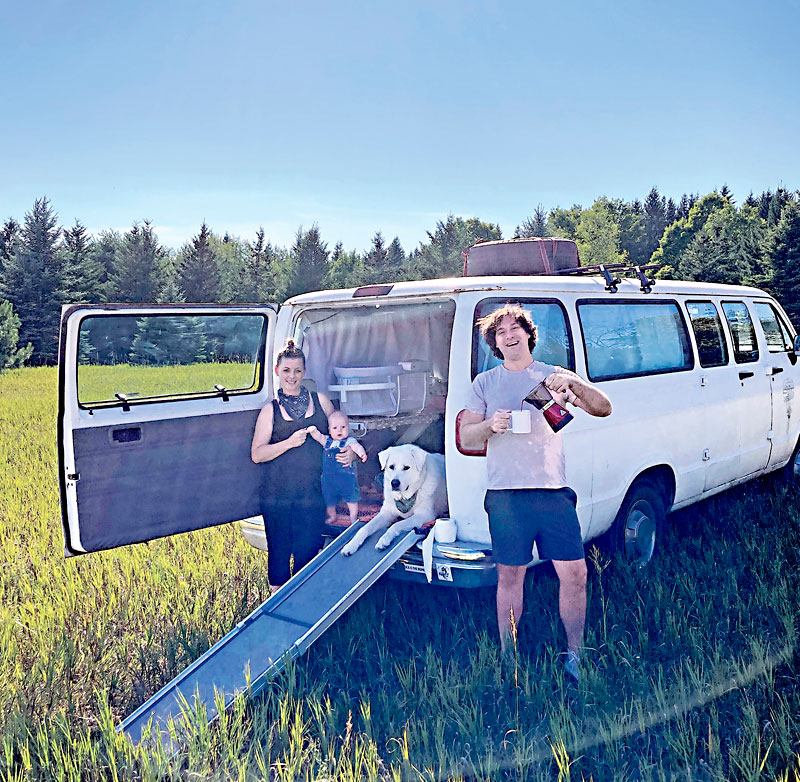 Molly Ryan, Quinn Ryan Curtin, Momar, and Kevin Curtin in their 1995 Dodge Ram 3500 van (Photo by Pat Curtin)
The challenge? To plan a 1,400 mile trip from Texas to Michigan, with a 16-pound baby and a 120-pound elderly dog, in a van that rolled off the assembly line during Bill Clinton’s first term as president, amid the hottest days of summer, and only stopping at gas pumps.

"Bon voyage," read a text message from my editor. "You are Odysseus."

To that point, the journey hadn't struck me as particularly Homeric. Then again, I was a wreck. I'd lost seven pounds, my eyes were crimson from lack of sleep, worry racked my mind, and I hadn't even pulled out of the driveway. The next morning we'd shove off on a 1,400 mile excursion from Texas to Michigan ... with a 16-pound baby and a 120-pound elderly dog ... in a van that rolled off the assembly line during Bill Clinton's first term as president ... amid the hottest days of summer ... only stopping at gas pumps.

I'm a new parent. Our son was born during the pandemic, and for the first four months of his life, he hadn't met any of his grandparents. More importantly, they hadn't met him – that's what was killing me. I thought about it every day – how our moms waited 35 years to have a grandchild, only to have it come during a pandemic that prevents older folks from being able to fly across the country safely. So my partner and I resolved to bring the little one to the elders, while maintaining a full-on quarantine bubble. 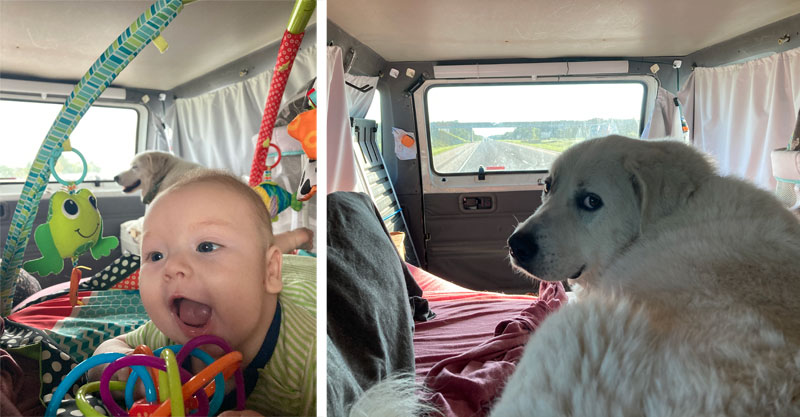 We viewed the venture as spiritually significant – this uniting of generations – but approached safety concerns with pragmatism.

Our first instinct was to get an old camper trailer that contained a bed and a toilet and pull it behind my girlfriend's reliable, compact SUV. As we began shopping for trailers in June, we noticed that owners of used trailers were especially proud of them right now – with prices astronomically higher than they'd been last year. Meanwhile, dealerships in Central Texas seemingly couldn't keep pull-behinds on their lot. A trailer would get posted online, and by the time you'd call the dealer, it'd be sold.

We then considered renting an RV and found an overloaded industry.

"I've been running around with my hair on fire since late May," Billy Mullins tells me. He's the manager at the aptly named American Dream Vacations, an Austin-based business that rents, sells, and services RVs.

Mullins reports a 400% increase in business from mid-May – when Texas state parks reopened – through July, compared to last year.

"There's a lot of first-timers," he says. "We're seeing people who'd normally go to the Bahamas, or take a European vacation, RVing instead. We've sold almost everything that we have to sell. With rentals, I'm booked out now until the middle of August. I have 55 or 60 on the road right now, but if I had 20 more RVs to rent, I could easily put them out there."

Mullins says he inquires with prospective renters about any potential exposure they've had to COVID-19, and his maintenance crew has had to step up cleaning. They use an aerosol bomb and have taken on other extra duties with disinfecting. It needs to be done fast, too. When a rental is returned, they clean it and do a systems check, then it's on the road again on the same day.

For my girlfriend and myself, this wouldn't be the first time we've traversed this nation's highways in a vehicle equipped with a toilet and bed. In 2007, the last time America fell into a recession, our home state of Michigan represented the nation's highest unemployment rate, and I'd just endured an eight-minute pistol whipping that rearranged my facial features while working a low-wage job as a hotel night clerk. We moved into a 1984 Toyota Sunland Express camper and spent a couple years driving around the country, sustaining ourselves with day labor jobs and lab-ratting ourselves out in paid clinical trials and behavioral experiments at universities. While we were parked in the North Park neighborhood of San Diego, local news shot a segment outside our camper about Americans in economic crisis retreating to motorhomes.

You could say we've been "#vanlife" since before the advent of hashtags. Now we'd be at it again.

With an RV or rental out the window – not enough inventory – we decided to modify my daily driver into a sleepable, poopable vessel.

With an RV or rental out the window, we decided to modify my daily driver – a super long 1995 Dodge Ram 3500 previously owned by the Houston Police Department – into a sleepable, poopable vessel. With the help of a fellow musician, who'll remain nameless so he doesn't get requests to help with other annoying van projects, we built a bed with cargo-netted storage beneath, a table that would hold our baby's bassinet, a ducted air conditioning system that would pump cold air directly on our precious living cargo, privacy curtains, and a bank of new and used marine batteries that would power a 2,000-watt power inverter, on which we could run fans, the noise machine that our little one needed to sleep, and – this one was crucial – an espresso maker to power long driving shifts.

During the 10 days of labor we put into getting the big, white whale road-ready, several spectators threw out the term "van life," which I began hearing in 2017 and has been an increasingly popular (and sometimes lucrative) millennial movement of embracing nomadism and obsessively documenting the lifestyle on social media. It's been the subject of two New York Times features over the summer, though they detailed pleasure cruisers with multi-hundred-thousand-dollar budgets – not scared parents feeling like they're in a disaster movie.

Grady Linder – founder of the rental service Voyager Campervans, which was founded in Minneapolis before expanding to Austin – says that the onset of coronavirus concerns in March and April brought business to dire standstill before interest in the customized sleeper vans went "though the roof" in May. Local demand for his tricked-out vans has presented inventory issues.

"It's good for us to have multiple locations because in Minnesota it's too cold to camp in the winter, and in Austin the summer's hot, but it's a great time to camp from fall into the spring, so we can switch vans back and forth," he explains. "We shrink our Austin supply during the summer and operate at a utilization rate of about 50 percent with a smaller-than-normal fleet. But we didn't have nearly enough inventory this year, and it threw us for a loop. Austin has stayed as busy as any other market through the summer. We're at 100 percent utilization rate, which is well over double what's usual, and we don't have inventory there to meet demand."

Linder also notes that while the average trip period for rentals in previous years had been five to six days, now it's double that – meaning people are traveling farther and for longer stretches of time.

"Right now it's the safest way to travel or go on vacation," he says. 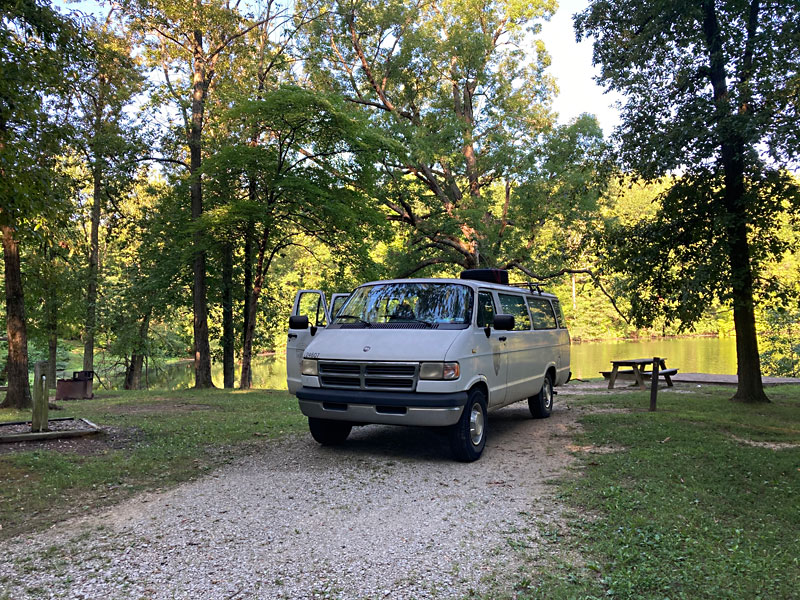 The vessel docked at a campsite near Terre Haute, Ind. (Photo by Kevin Curtin)

Working Through the Logistics

It's true – it's safer for travelers to control their own transportation and the conditions. But travelers should be thinking about the safety of others, too. I still believe some instances of travel are unconscionable. Some people who live in small towns in beautiful, rural places don't want travelers from a hotspot like Texas passing through and potentially bringing COVID germs. (It goes without saying that wherever you go, you should be following the usual safety protocols of mask coverings, social distancing, and so on.)

For our own safety and for the safety of anyone we'd encounter along the way, we vowed not to go indoors while we were traveling, which is why our trip necessitated having a toilet in the van. Obviously, we weren't the only one with that idea, as all of Amazon's travel toilets are on backorder. That dilemma forced me to do the unthinkable, purchasing a – gulp – used portable potty on Craigslist. Typically I'm happy to save money by buying used products, but something people put their butts on is where I'd normally draw the line. In a divine moment of good fortune, the used travel toilet I picked up from a driveway in North Austin turned out to still be in the packaging. Hallelujah. 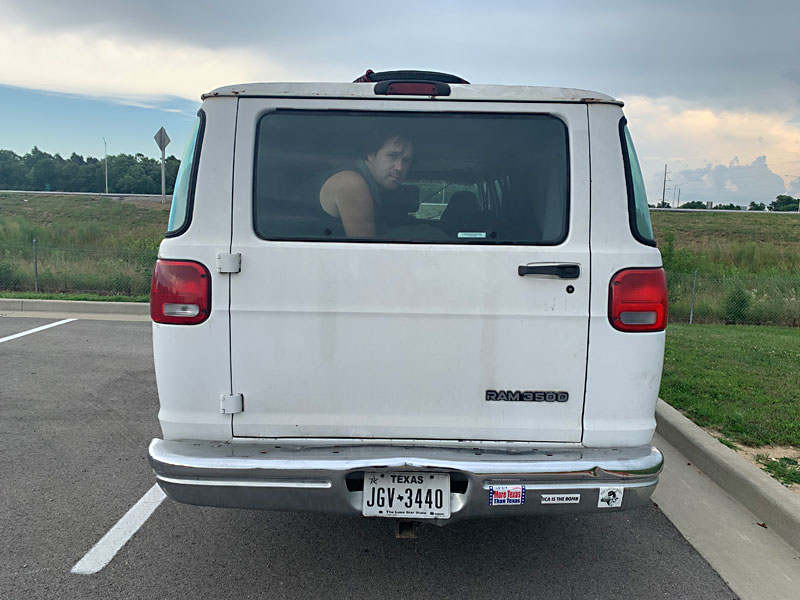 The Journey and the Destination

It was a hardcore journey, our three-day trek, with lots of laughter and some crying – mostly from the baby. These were long days of driving, interspersed with frequent stops to feed the little one, so we never covered as much ground as it had seemed. We did treat ourselves to an unnecessary stop in Casey, Ill., to look at the world's largest rocking chair.

It was, indeed, a really big chair.

The first night we found some federal land in Eastern Arkansas on which to boondock – that's what people call camping on wheels without a power hookup. It was serene and abandoned, except for a million hungry mosquitos. The second night, heavy semi-truck traffic prevented us from reaching another stretch of free land to occupy, so we stayed at a campsite in Terre Haute, Ind., where our quarantine trip was nearly nullified by an indignant anti-masker who tried to walk up to us and tell us about how he doesn't need to wear a face covering. We barely escaped.

When the van rolled into the driveway on the southside of Lansing, Mich., barely a minute passed before the kid was in his grandma’s arms.

I hardly remember the last day of driving – all we could think about was getting to our destination. When the van rolled into the driveway on the southside of Lansing, Mich., barely a minute passed before the kid was in his grandma's arms. Even though he's existed in a social bubble, physically, having never been held by a single person other than his parents since birth, the boy didn't cry – in fact he was overjoyed. Maybe he recognized his maternal ancestor from frequent video calls over the last four months, or maybe you just feel what's right in life.

That moment was maybe the only time that things have really felt like they've just plainly, truly made perfect sense in the last four months.

And the American road trip has roared back to life. People are discovering incredible outdoor spots mere hours from home or venturing farther afield, across the country in campers and cars with tents in the trunk – seeing nature, appreciating the in-between spots in the flyover states that are sometimes easy to overlook.

Some of the practices folks have adopted during the pandemic will endure after a vaccine is found, and perhaps the popularity of road-oriented vacations will be among those. For us, traveling across the country in inexpensive four-wheeled self-sufficient quarantine containment served as a reminder that, whatever the challenge is, if it really matters, we can always make it work.