The ACC Drama Department Enters Teaching in the Coronavirus Tragedy

For Marcus McQuirter and ACC drama department, even in the pandemic it's on with the show 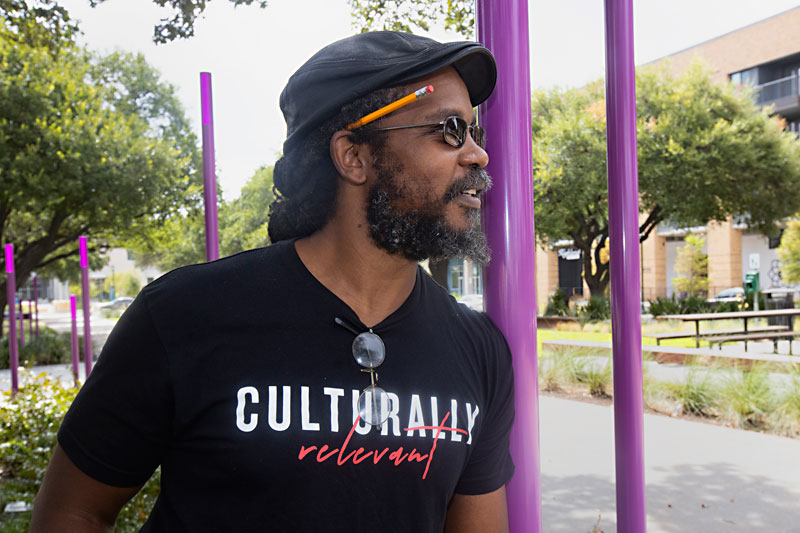 These days, a lot of people teaching theatre in higher ed feel like that falling tree in the forest: If a student learns to make theatre and no theatres are around, is there a point?

Marcus McQuirter thinks so. Certainly, he's planning as if there is.

McQuirter, who chairs the Austin Community College Drama Department, has put together a fall schedule with many of the same courses the department's offered all 14 years he's been there – theatre appreciation; voice; acting; scenic, lighting, and costume design – though he's keenly aware that this year at ACC won't be like any before. The students will be learning about theatre through screens, far from any stage and from one another.

McQuirter gets the problem: Theatre needs people in the room together, actors playing off actors, actors playing off audiences, audiences transported to other worlds by lights, sets, costumes, sounds – this big mix of actions and reactions in the moment. Without that, McQuirter says, "It's a different energy. It's just not the same. There's no substitute. That's the reason we all went into theatre as opposed to film or television."

If a student learns to make theatre and no theatres are around, is there a point?

Still, theatre doesn't stop. When all the world's a stage, show folk just move to a part that's online. Case in point: After the ban on live events forced the department to cancel its spring production of 12 Angry Jurors, McQuirter thought the traditional student showcase at the end of the semester was toast, too. But adjunct assistant professor Rachel Atkinson, displaying that thespian "show must go on" pluck, told him, "Old man Marcus, I think we can do this," and promptly assembled a digital program with students performing monologues and presenting design class projects.

Now, the show will go on in ACC's drama classes. Naturally, most courses will be online, but faculty members with experience at distance teaching are helping others adapt to the format. Acting class? "Get rid of the duet scene unit, add another monologue unit, maybe do some Uta Hagen object exercises." Intro to stage management? "Put more focus on paperwork and how to build a prompt book." These go beyond survival tactics for pandemic-era schooling, though. McQuirter's urging the faculty to aim for quality, to think, "Someone's paying cash money for this. Are they gonna get what they would if there was no COVID?" With anyone in the state able to take ACC classes through the DigiTex consortium, their online theatre courses could become a draw for drama students outside of Austin.

Of course, distance learning isn't for everyone. McQuirter understands: "Aside from the whole discipline and self-pacing thing – and some people got it, some people don't – the online learning environment has the potential to alienate kinesthetic learners." So ACC drama has submitted a plan for hybrid acting classes: virtual lessons supplemented with small, in-person sessions with the instructor – just two or three students at a time – in a large studio with social distancing. And it's created a way for design students to get hands-on experience at home. "We have all these instruments just sitting in the building that we can't use," says McQuirter. Why not pack some old fresnels, a crescent wrench, and tape into a kit that lighting tech students can bring home, where they can take the instruments apart and put them back together? Wigs and styling students will have kits that include wigs, head forms, Fosshape, and netting. McQuirter credits Atkinson and Stephanie Dunbar with the concept. "[They] were like, let's just send the work with them, like takeout – takeout learning."

The check-out/check-in process is slightly more complicated than the library's – "There's a little wagon that we set in front of the building, and we put these kits in it. Students drive up and, maintaining social distance, they grab the kit and take it home. And they bring it back, and we have a table, and we have to watch them wipe it down and spray it." – but that's the nature of the business.

"It's a lot of extra steps," McQuirter admits, "but it's theatre – always handmade, we're always working hard, so it's nothing new."

A version of this article appeared in print on August 7, 2020 with the headline: Stage Management