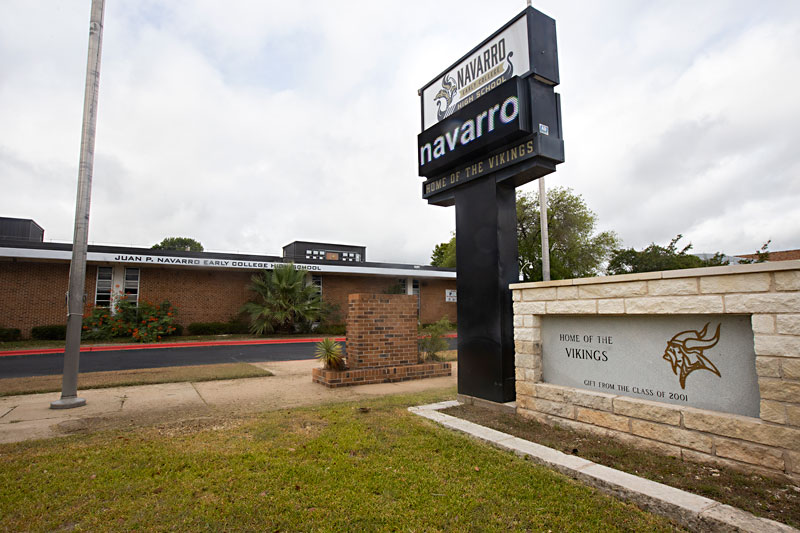 IBM liaison Nahum Pacheco misses Navarro High School. He misses the flash of recognition in students' eyes when they saw computer programmers who looked like them walking into the classroom, dressed not in suits and ties but in T-shirts and jeans. He misses helping students in the Pathways in Technology program, or P-TECH, prepare for jobs, showing them how to translate their daily activities, like rushing home to take care of siblings, into résumé bullet points of punctuality, responsibility, and people management.

Mostly, Pacheco misses getting to know the students as he greeted them, walking through the halls. "It starts going from head nods to 'IBM guy' to 'P-TECH guy' to 'Pacheco.' Eventually, when they know you by last name, that's when you know ... they trust you, there's that unity," Pacheco said. "We were working so well at that, and then everything came to a halt."

The P-TECH program at Navarro (formerly Lanier) is a subset of its early college high school, one of seven ECHS programs at high schools within the Austin Independent School District. The program, a partnership between AISD and Austin Community College aimed at "historically underserved and at-risk students," allows high school students to take dual-credit courses for free. A junior taking an English composition course at ACC could satisfy an English requirement for graduation and earn college credits in the subject.

The credits can be transferred to other universities if students decide to pursue a four-year degree. Or, if students accumulate enough credits, they can earn an associate's degree alongside their high school diploma, often qualifying them for jobs out of high school. (Navarro's P-TECH program combines internships and job training with college credits, and ends with an associate's in either Computer Programming or User Experience Design.)

It is, Mison Zuñiga says, an opportunity for "getting ahead." Zuñiga heads ACC's office of college and high school relations, which has seen a 28% increase in dual-credit enrollment this summer and expects similar jumps in the fall and spring. With the instability of the pandemic job market – June unemployment in Austin was 7.5%, nearly triple its rate last year – an associate's degree in an area like computer science can be a lifeline, especially without an attached tuition cost.

Navarro's early college coordinator Jason Berinsky also expects an uptick in numbers, especially at the growing P-TECH program, which began last fall. In non-pandemic times, P-TECH offers coding and programming internships to students as juniors and seniors. The instability, Berinsky said, has made the program "more enticing – a better offer."

The online format made recruiting difficult, especially as P-TECH and early college high school are both relatively new options – the first P-TECH program was founded in 2011. This means almost no parents are familiar with the terms. In addition, the students the program targets are less likely to have stable internet access, meaning some could be missed by the online recruitment.

Despite the barriers, Navarro has enrolled similar numbers of students to last year, although a month remains before students formally enroll in the ACC courses. Berinsky held a dozen Zoom information sessions, in addition to phone and email outreach, to get in touch with students and families about the program.

However, despite the difficulty in outreach, the program does foresee some bright spots. Pacheco said the online-only format of ACC classes this fall, including all those required by P-TECH, could give students experience in the modern work environment – that is, a digital one.

"If you're going to interact with a team on the other side of the world, you're going to do it just like we are now, and so I think it's actually a good opportunity for students to see, 'This is what the professionals do, this is how they do it,'" Berinsky said. "Before you're getting fired if you don't do it."

And although Pacheco will likely not be on campus this fall, he and IBM's mentors will continue providing support for P-TECH's students. ECHS students have access to both school and ACC tutoring, counseling, and support resources; P-TECH students can rely on those and also IBM's mentors and resources, including hours of tutoring.

"We've got multiple levels backing up those students," Berinsky said. "That's why we're able to see the success that we've had so far and it looks like we're going to have in the future."

With enrollment rising, Berinsky and Pacheco hope that the program will come through the pandemic stronger. Berinsky said students completed nearly 100 more credits this spring than they did last spring, an increase of around 30%.

"They made it happen, not only in a high school setting but in a college setting as well, going in first year into both realms simultaneously," Pacheco said. "I think that that speaks volumes and they've been able to thrive so that just speaks to their drive."