Explore the Natural Beauty of Texas at These Four State Parks 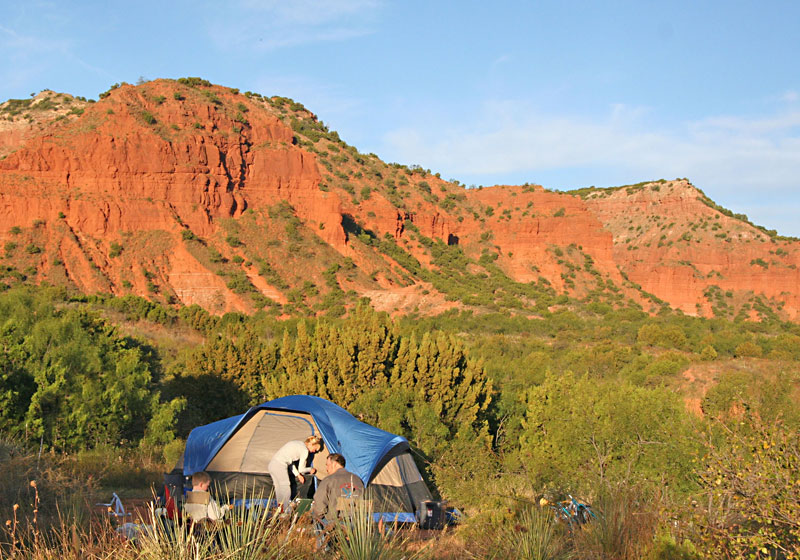 Austin's bevy of outdoor spaces can make it easy to forget the 630,000-plus acres of Texas state parks and natural areas that lie only a road trip away. So we've rounded up a selection of outdoor destinations you can explore in a weekend or across a weeklong getaway, encompassing every landscape and habitat from badlands to coastal marshes. (Apologies to West Texas, you're just too hot to handle in the scorching summer months.) Round up the crew, throw a spare in the trunk, and head out to explore some of Texas' best places to have fun in the sun.

Enchanted Rock State Natural Area With its sloping, pink granite dome, Enchanted Rock almost appears as an apparition rising out of the rolling Hill Country. Hike-in, primitive campsites are the way to go here. These sites clock in at 1- to 3-mile hikes, which makes them a great option for those wanting a more rustic experience without the slog. Stargazing is one of the park's biggest draws, as it's one of Texas' four International Dark Sky Parks – aka home to one of the clearest, darkest night skies in the state – and the closest one to Austin, making it the place for Austinites to watch August's Perseid meteor shower. Pro tip: Avoid the summer's insane wait times by driving out to the park after work on a Friday, once the day-use visitors have cleared out, and set up camp for the night. In the morning, hike up the namesake dome for a 360 view of the sun rising over the park's 1,640 acres.

Colorado Bend State Park If you're looking for a swimming destination west of town but less gorged with party barges than Lake Travis, then Colorado Bend is the place for you. Take a dip in spring-fed creeks and myriad swimming holes, or hike to Gorman Falls, a 70-foot travertine waterfall. Lovers of dark, dank crevasses can sign up for a cave tour of the park's underground karst passages, areas where limestone has dissolved to form stalactites, stalagmites, and flowstones. Options range from family-friendly, roomy caves to a more rugged crawling tour that'll take you even deeper underground and into the homes – and spindly legs – of Texas' creepy crawlies.

There (Less than four-hour drive)

Mustang Island State Park It's been a long road of recovery for Mustang Island State Park post-Hurricane Harvey, which caused extensive damage when the storm made landfall at Port Aransas almost two years ago. The park reopened last spring with limited facilities and no overnight camping allowed; however, it's looking like park officials are hoping to reopen camping as early as June 1 (get the latest updates on their Facebook page). Alternatively, road trip for a good cause and sign up for a day of service at other coastal state parks still recovering, like Goose Island State Park in Rockport, where bayfront camping is prohibited but volunteers are needed for ongoing habitat restoration efforts.

Over Yonder (Over six-hour drive)

Caprock Canyons State Park & Trailway The official Texas State Bison Herd roams the Lone Star State's third-largest state park, located just south of its more famous and visited Panhandle neighbor, Palo Duro Canyon. Nevertheless, Caprock is worth a visit in its own right, with the stunning red-rock buttes and cliffs of the Caprock Escarpment – the geographical transition between the High Plains and lower, rolling plains to the east – carving out the canyons throughout the park. Hike the steep inclines in the backcountry, or grab a bike (or horse) and ride along the Trailway, an abandoned rail line that's been converted into a trail, and through Clarity Tunnel, where even the most homesick Austinite can get their batty fill with the up to half a million bats who claim the tunnel as their summer home.

The Texas State Parks Pass ($70) gives you – and an entire vehicle of guests – unlimited free entry to more than 90 state parks for one year, as well as discounts on camping fees, park store purchases, and equipment rentals. Purchase one online at the Texas Parks & Wildlife website, at any state park, or by calling 512/389-8900. Find more info and make reservations online at www.tpwd.texas.gov.

A version of this article appeared in print on May 17, 2019 with the headline: Car Wheels on a Gravel Road