A Sampling of Summer Attractions Around Texas 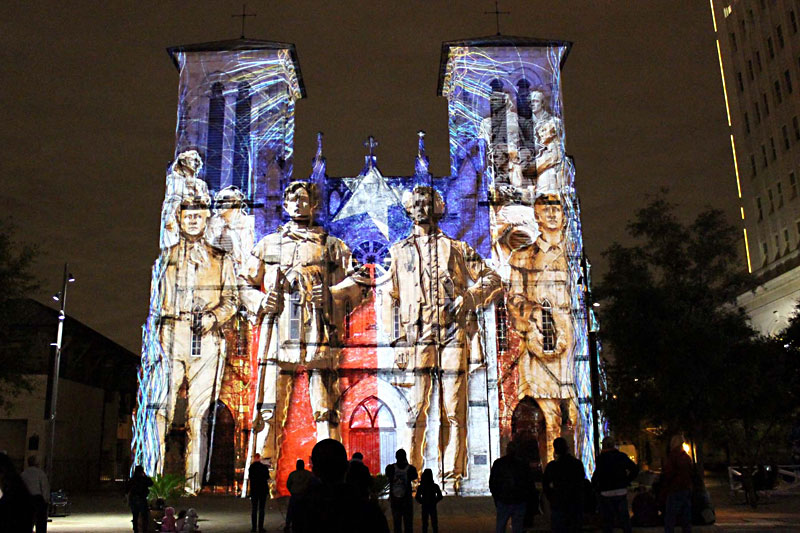 The Saga tells Texas history on the façade of an 18th century cathedral in San Antonio (www.mainplaza.org). The colorful 24-minute projection using San Fernando Cathedral as a canvas is the extraordinary work of French artist Xavier de Richemont and continues through 2024.

The Buffalo Bayou Park Cistern (www.buffalobayou.org) began in 1926 as a city water reservoir on the edge on downtown Houston. At 81 years old, the 15-million-gallon tank sprang a leak. Eleven years later, the cavern became one of the most unusual tourist attractions in the state, offering rotating art installations and architecture tours.

Blueberries are a superfood and picked fresh from the bush, they're super good. The harvest normally runs June through July. Moorhead's Blueberry Farm (www.moorheadsblueberryfarm.com) outside of Conroe has 20 acres and 20 varieties of the berry. Blueberry Hill Farms (www.blueberryhillfarms.com) near Edom added a bakery to their pick-your-own field. To celebrate all things red, white, and blueberry, head to the Texas Blueberry Festival, held June 8 in Nacogdoches (www.tbf.nacogdoches.org).

Depending on the variety, Texas peaches are harvested from June to August. The best peaches are just down the road from Austin in Gillespie County. On the Wine Road to Fredericksburg, Jenschke Orchards (www.bestfredericksburgpeaches.com) offers pick-your-own peaches and a roadside stand. And the Stonewall Peach Jamboree, running June 20-22, has all the elements of a country fair, from great peach foods and a peach queen pageant to exciting rodeos (www.stonewalltexas.com).

Everything in Texas is bigger, including our outdoor theatre productions. In Salado, the historical musical drama Legends (www.tablerock.org) tells the story of 1850s Central Texas on July 20, 27, and Aug. 3. To return to the days of frontier Texas, head to Albany for the Fort Griffin Fandangle (www.fortgriffinfandangle.org), where performers sing and dance their way through the Wild West, June 21-22, 28-29. Meanwhile in the Panhandle, the musical drama TEXAS (www.texas-show.com) – first performed in 1966 and running June 1-Aug. 17 this summer – tells the history of the state with Palo Duro Canyon as the background. The Texas Shakespeare Festival (www.texasshakespeare.com) in Kilgore hires professional actors to perform the bard's works from June 27 through July 28. And in Round Top, 80 miles east of Austin, for 48 years students have presented Shakespeare at Winedale (www.shakespeare-winedale.org) in a barn converted to a theatre. The tradition continues July 18-Aug. 11.

Austin hosts the largest urban bat colony in the world from March to October. But if you're looking to travel farther afield than the Congress Avenue Bridge, there are other bat-spotting opportunities around the state. Outside of New Braunfels, Bracken Bat Cave (www.batcon.org) with 15 million bats is the largest maternity colony in the world. The Eckert James River Bat Cave (325/347-5970) outside of Mason hosts around 5 million bats during the summer. Near Fredericksburg, the Old Tunnel State Park (866/978-2287) has evening flights of 3 million bats. And in downtown Houston, a boat takes visitors on Buffalo Bayou to see the bats emerge from Waugh Drive Bridge (www.buffalobayou.org).