4am With a Head Full of Whiskey 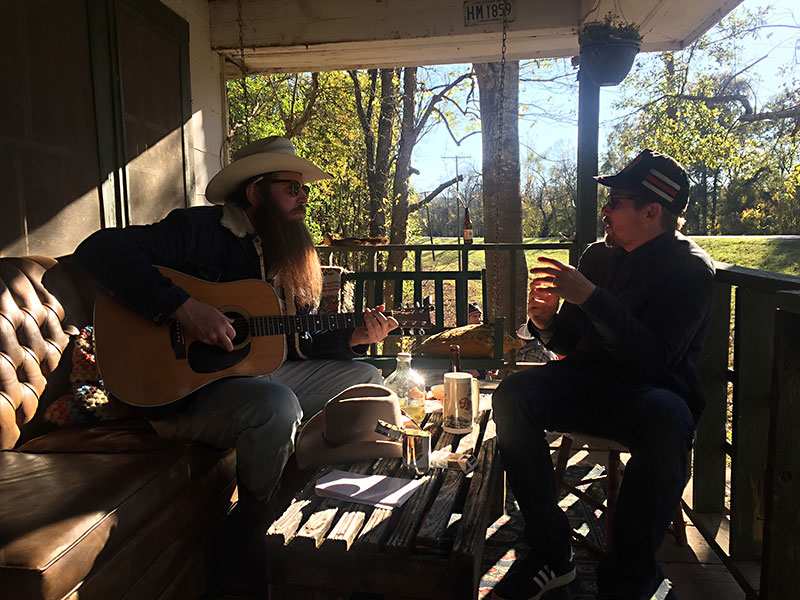 Ethan Hawke looks across the stage at the Gibson Guitar Showroom at Ben Dickey and smiles. He just bungled the lyrics to Townes Van Zandt's "To Live Is to Fly." He laughs that maybe they should have rehearsed a little, and Dickey grins back.

The pair were warming up and chilling out in the space between interviews and a screening for the Austin debut of Hawke's fourth feature film as a director, Blaze. It's a story born of an intermingling of roots – Austin-born Hawke directing Arkansas musician and first-time actor Dickey in the story of Blaze Foley, the Natural State native who became a fixture of Austin's music scene before his untimely death in 1989.

That night's SXSW screening at the Para­mount Theatre wasn't the world premiere, as that had taken place two months prior at Sundance. Dickey – burly, soft-spoken, with all of Foley's legendary charm but fewer of his sharp edges – seems to appreciate the milder Austin March to Park City under a few feet of snow. "It was very exciting, but merciful heavens it was cold, and I've got bad lungs, and there was all these inverted hills. This is much better."

Music has always been a thread in Hawke's work as a director. "It is the purest flame," he said. "You know that Mark Twain line, that all art aspires to be music. It's true north, because it's not intellectual, it doesn't even need words. It's sexual and spiritual at the same time." His passion for the subject was most obvious in 2015's Oscar-winning portrait of composer and teacher Seymour Bernstein, Seymour: An Introduction, but it's often presented itself in less overt ways. His first feature as a director, 2001's Chelsea Walls, had a score by Wilco's Jeff Tweedy, and he called those songs "the lead of the movie. That movie doesn't have a story, it's a tone piece, and I challenged Jeff Tweedy with being the voice of the Chelsea Hotel." That score is one of the aspects of the film that he's most proud of, and the same with his follow-up, 2006's quasi-autobiographical The Hottest State, where he got his friend Jesse Harris to compose 18 original songs, then called on further friends and musicians he admired to perform them. "We had Willie [Nelson] cover one, and Cat Power, and Norah Jones, and all these amazing other people."

In Blaze, Foley's music is as much a character as Foley himself – sometimes more so, since he died before most people could hear his work. His legacy has been embraced, even canonized, in Austin, but – as is core to the film – he was a loud enigma with a genius for sabotaging his reputation, and was never as famous outside the city limits as many of his peers thought he should have been. "He made sure of that," said Dickey, who came across Foley by a circuitous route. In the early 2000s, he introduced his father to the work of John Prine. "My dad is someone who should have been on the John Prine shit from the beginning," he said. "My dad was like, 'Have you heard this song "Clay Pigeons"? It's on this album, and this guy Blaze Foley wrote it.'" At that point, Dickey said, "What I knew about Blaze was that he was friends with Townes, and that he was eccentric," and it was actually his dad who started doing research, burning tracks to CD, sending him stories and tall tales about the man known as the Duct Tape Messiah. "There were three different accounts of his death, which reminded me of Robert Johnson. People go 'Robert Johnson got his throat slit.' 'No, he got poisoned.' 'No, he got stabbed.' And it was here and it was there, and it was because of this, because of that."

"Mythology for any musician is good," Dickey added. "Living or dead, you want to be mysterious."

“With retrospect, killing yourself on drugs and alcohol, playing dive bars, sounds kind of romantic. In the living of it, it’s pathetic.”

But Blaze isn't your standard mythologizing musical biopic. There's no performance glamour shot, where Foley suddenly entrances the audience in some honky-tonk – instead, he's more likely to be picking fights with hecklers, or blowing deals that could have made him a household name. It's less a story of self-destructive talent than a portrait of a guy who thought screwing up was funny. Hawke said, "In retrospect, killing yourself on drugs and alcohol, playing dive bars, sounds kind of romantic. In the living of it, it's pathetic. For every moment of grace, there's four and a half years of being hungry and getting syphilis, getting your teeth fixed and not having enough money to finish your root canal. All those details that people like to leave out in memory."

The film's framing mechanism of Van Zandt (played by another musician-turned-actor, Charlie Sexton) telling a deejay about Foley's life and work is brutally honest as only a friend would be. But when Foley's violent, unexpected death – bleeding out in Austin's Travis Heights neighborhood from a bullet to the chest – comes, it's not a dramatic inevitability. It's a senseless tragedy that derailed a brighter future. Hawke compared his subject to the equally ill-fated jazz trumpeter Chet Baker, whom he played in 2015's Born to Be Blue. "You don't sense when you play Chet Baker that he gives a shit whether you play him or not. There's something different happening around Blaze's death."

While the tragedy sounds like a natural movie, when Hawke and Dickey first started, it wasn't going to be a full feature. They'd been friends since 2006, when Hawke became a fan of Curse & Praise, the debut album by Dickey's band Blood Feathers, and came up with an idea about a TV show centering around the country and folk scenes of the Seventies and Eighties. Dickey recalled, "[Ethan] was like, 'You're kind of a big guy, and Blaze would be half an episode.' I thought, yeah, I could handle that." In hindsight, Dickey said, "[Ethan] may have been percolating on it a little bit longer than he let on." Around 4am on New Year's Day of 2016, the pair were walking home "with a head full of whiskey. I watched his eyes get really big, and he went, 'I'm going to make a Blaze Foley movie, and you're going to play him.'" Initially Dickey thought Hawke was just being nice to him after a few false starts in his musical career, but then he got a 9am call that same day, inviting him for a walk to talk about the film. "When he gets excited, he gets excited, and his vision starts going [and] before I knew it, it was getting real."

For Hawke, there was something organic and indecipherable about how Blaze came to be, and that's how it should be. He said, "Richard Linklater always says this to me, that cinema is its own world, and sometimes doors open and sometimes they close, and you have to pay attention to when doors are closing. You can force your way through, if you really want to sometimes, but that may not be smart, and that often it's much easier to move with the river. Doors for this project just opened." Like with how Sybil Rosen came on board as a key collaborator. As Foley's partner, and author of the key work on which the script would be based – 2008's Living in the Woods in a Tree: Remembering Blaze Foley – Hawke said he needed her to approve of his vision of Blaze, and that took showing her Seymour. He said, "I saw Blaze as a photo negative of Seymour, that they were just completely brothers, but in separate worlds, and she agreed. [She] said something beautiful – that they were different men, but they were asking the same questions."

There's a sense that Hawke's film is filling in some of the blanks that were left by Foley's unfulfilled potential, and in a way it was Foley pushing those doors open so he didn't have to. "Blaze invited us," he said. "His music, his being, his energy, his life, invited us into a room together."

Ethan Hawke and Ben Dickey will be at Waterloo Records Sunday, Aug. 19, at noon for an interview and Q&A.