From an 800-pound pig to cuddly baby goats, these farm animals are earning their keep 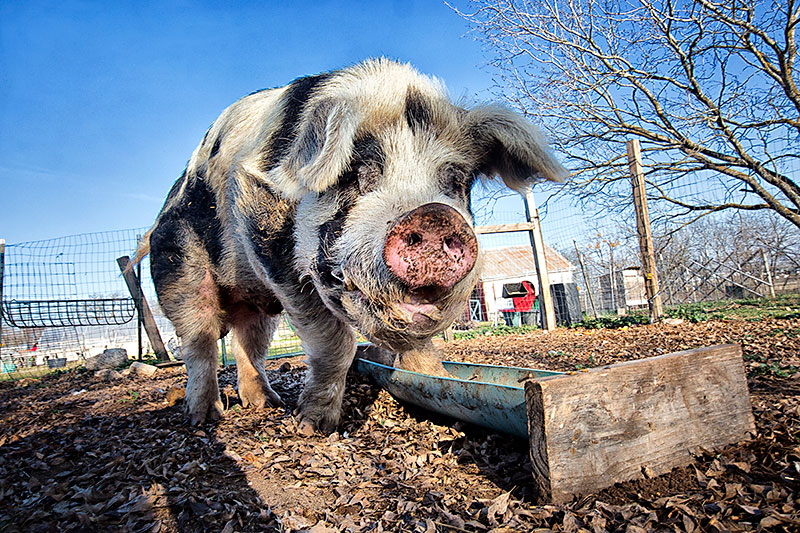 While Austin has plenty of big-city style, it certainly also still has that country Texan heart. These animal citizens are proof of the latter, and may just become your favorite Austinites.

Coming from a long lineage of Green Gate Farms heritage hogs, Spot reminds visitors what a real pig looks like. At over 800 pounds, Spot lives a life most pigs – and, to be frank, humans – would dream of.

"I think he's eaten better than most of Austin, actually," says farm co-founder Erin Flynn. "My husband and I used to go get food waste from the Whole Foods distribution center to feed him." Now Spot has some devoted fans that do this hard work for Flynn. She describes how one friend brings Spot all the leftover food from Austin Discovery School, including everything from sandwiches to pastries. After Halloween, all of Austin is encouraged to send Spot a meal or two by donating their pumpkins.

However, it was last summer that Spot got his most special meal yet. After gaining inspiration from all the birthday parties for other folks that Green Gate Farms hosts, Flynn decided it was time for Spot to get his turn.

"Everybody loves Spot, so we wanted to celebrate him." The event was a huge success, with people posing for a photo with the guest of honor, sitting on him, and feeding him food scraps. In fact, the party was so much fun that Flynn hopes that they can do it again this summer.

"He was born on the farm and people have watched him grow up," Flynn says. "He's a community pet." With any luck, and with the hope of continued decadent dining, Spot will continue to be a community resource for education, sustainability, and just plain curiosity.

Part cattle dog, Buddy decided to branch out from his breed and become the chicken protector of Boggy Creek Farm. When not saving chickens from the perils of farm life, he's busy greeting visitors to the farm stand. "We named him Buddy because people call dogs Buddy anyway," says farm co-owner Carol Ann Sayle. "Now it's like everybody knows him."

Bee Tree Farm & Dairy owner Jenna Kelly-Landes wanted a more engaging way to get people onto the property than your standard farm tour. Thus, a Cocktails & Cuddles happy hour with all the baby goats the farm has to offer was born. Kidding season isn't year-round, so be sure to grab tickets while you can.