The Bookstore Cat Is Alive and Well 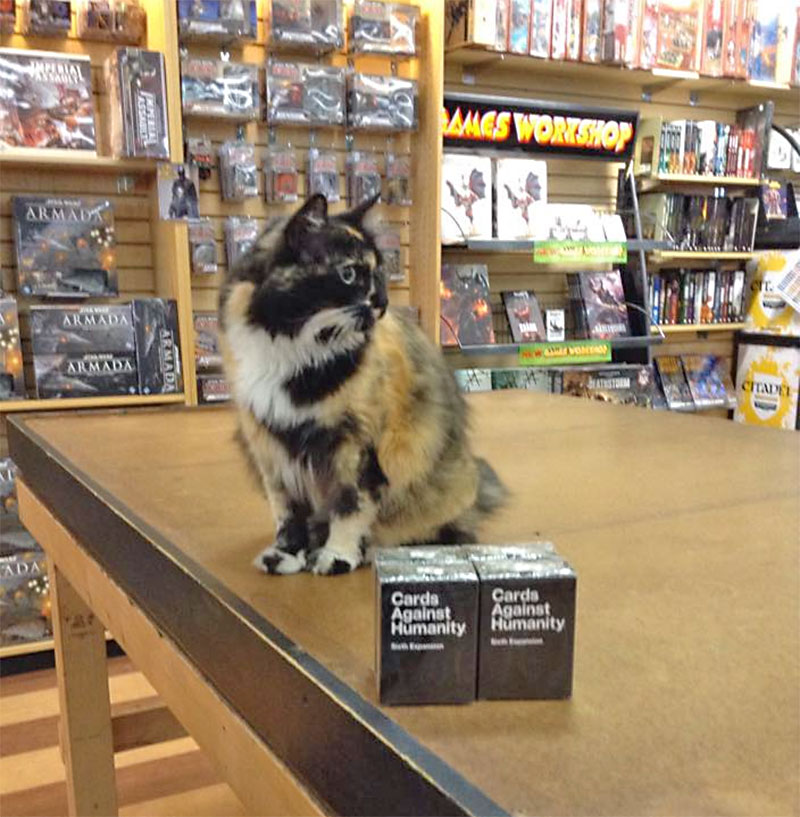 Readers can be capricious creatures. We take a long time getting settled in just the right place – do we want to sunbathe, or is the natural light too bright on the page? Trust is hard to build – picking a novel is a commitment of time, a definitive choice of this book above the millions of others that could consume your time. We preen, with our Goodreads reviews and bookshelves organized by author or subject or color, but our practice makes us essentially solitary. At the end of the day, we want to curl up with a good book.

If this character portrait strikes you as a tad feline, it's because I believe that the symbiosis that occurs between so many cats and book-lovers is something we come by naturally. How else to demystify our continuing tradition of bookstore cats? While diverse business owners may have employed cats as pest preventatives in ages past, the rise in health codes drove most entrepreneurial rat catchers into retirement. But look up "bookstore cat" and you're greeted by listicle upon listicle compiling Instagrams of the most famous felines, lounging upon display tables or daring a patron to unseat them from a velveteen chair.

Austin's impressive array of independent booksellers might make one a little peeved that no local entries appear in the major roundups. Surprisingly, most of our literary purveyors don't have pet companions of any kind. Susan Post of BookWoman attributes their lack of a furry friend to the combination of being short on time and a fundamental disinterest in cleaning a litter box (fair enough). Schandra Madha of Malvern Books is one of many animal-loving staff members, but notes that their space isn't quite right for a permanent pet. Everyone happily accommodates service animals, and, in the case of Austin Books & Comics, all store-trained dogs are encouraged to give them a visit for the chance for your pup to become their Dog Visitor of the Month. But no canines take up official residence inside.

Only one local establishment embraces the cultural tradition of the bookstore cat – Dragon's Lair Comics & Fantasy. The comics and gaming behemoth, in its 31st year and newest location on West Anderson Lane, has had feline friends since its inception. For 18 years, Aswan ruled the store, riding around on customers' shoulders and making herself at home on any surface available. She passed away in September 2014, and remains greatly missed and remembered fondly by staff. The store wasn't left without a feline guardian, however. Before Aswan's departure, she had been joined by Mai Dez, a particularly fluffy calico who simply walked into the store as a kitten and refused to leave. Without any sign of a collar or tags, and determined by everyone to be feral, the team adopted Mai Dez, now approximated to be 8 or 9 years old. Not wanting Mai Dez to be forced into a solitary existence, the team started keeping an ear to the ground for opportunities to adopt, according to PR and facilities manager Greg Burrow. Fate beckoned when the store owner's sister rescued a cat that had been locked in an abandoned house for two weeks without food. Abbey (also a calico, though with slightly less fluff) arrived at the store in January 2015, skinny as a rail and in need of lots of love. She made a full recovery under the watchful eye of the Dragon's Lair team, though Burrow notes that she never quite forgot her starvation experience and tends to bolt down her food.

Like more bookstore cats, they're not particularly helpful employees – they knock over displays on occasion, are more than happy to lay down on the book you most want to read, and will shamelessly beg patrons for scraps of food (though the store strictly prohibits feeding them). But we can't quite condemn that laissez-faire attitude. It's a self-portrait, after all. Pets grow to be like their owners, and vice versa, and when the human's a reader, neither party has to change much.

A version of this article appeared in print on February 10, 2017 with the headline: As I Lay Purring