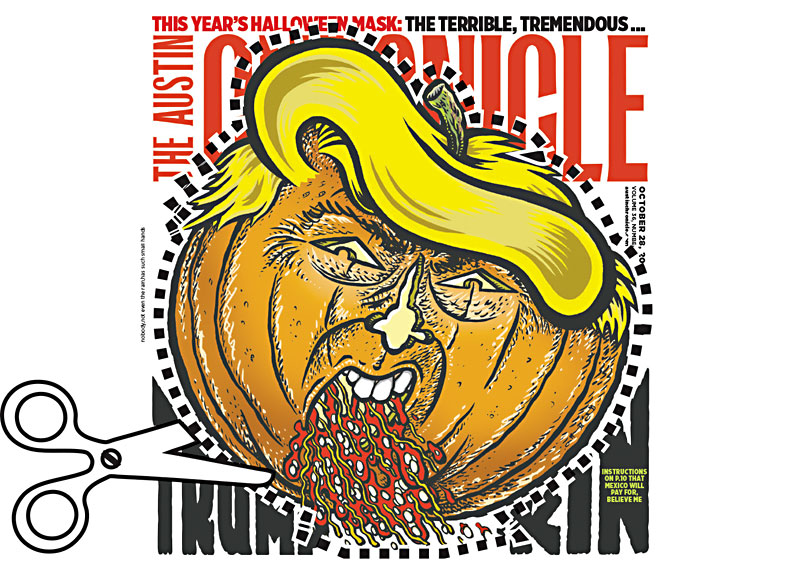 Scene: Trump Tower, nightfall, the Republican nominee for president's Midtown Manhattan corner office. A tired and defeated Trump slouches into his plush red executive chair and checks the messages on his phone.

"Donald? It's Paul Ryan. Look, I know things aren't looking too bright right now, but at least it's Halloween. Candy, right? Okay. Look, I know a lot of people won't want you at their house trick-or-treating ... or campaigning ... or at all ... but you'll be more welcome in this mask.

"Now, I know you wanted to dress like Pepe the Frog. Pepe isn't cool, okay? And I don't care what David Duke told you: That's not a ghost hood he sent over. Leave that cloak at home.

1) Get someone to grab you a copy of the Chronicle. Maybe a contractor, so you don't even have to pay them.

2) Pull off the front cover. You can rip up the rest; take out some of that anger about the biased media you've been bottling.

3) If you want to make the mask a little stronger, glue it to some cardboard. Just ... don't sniff around it. That's a bad look for us, Donald. If you don't have any cardboard, just use one of those FedEx envelopes you keep receiving from the courts.

5) Now, Donny, let your kids cut around the mask. Tell them to be careful around the hairline: It's huge. Make sure to cut out the eye holes, just like David Duke taught you.

6) Okay, we're nearly done. Get some string and tie it around the back so it'll stay propped on your head. Don't worry, it won't crush your hair. Let's be honest, nothing can.

Now put the mask on. Keep that sucker on through November 8. And don't forget, no matter how hideous it looks, it's still putting a better face on your campaign than the one you brought yourself. Talk later."

The Austin Chronicle Halloween Cover Mask is an annual tradition. See our gallery of covers going back to 1999.

How to Assemble Your Armed White Male Mask
The new face of terror, no ammo necessary

Mask Instructions: Be Prince for a Night
Step One: Get Your Binders Out