The Archeology of Business

Digging out the Austin Gay and Lesbian Chamber of Commerce 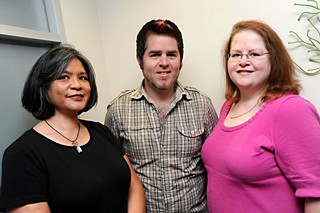 True: Technically, the Austin Gay and Lesbian Chamber of Commerce is 15 years old; the organization was officially incorporated in 1997. But, as is the case with so much LGBTQ history, there's a history before the history. For example, before New York's Stonewall Riots of 1969 – often cited as the beginnings of the gay liberation movement – there existed a number of robust homophile organizations like the Daughters of Bilitis and the Mattachine Society, as well as a few notable protest actions, including some very upset drag queens and hustlers hurling coffee cups and doughnuts at the notoriously invasive vice tactics of the Los Angeles Police Department in 1959, and the Compton Cafeteria riots of 1966.

So what can we find in our own AGLCC's archeology? As Amy R. Cook, president of the AGLCC, quipped, "In order to figure out where we're going, it's important to know where we've been." The earliest of AGLCC's many incarnations was an organization known as the Stonewall Business Society. Founded in the late 1980s, the SBS's mission was to gather together gay businesses for the primary purpose of networking. According to Jack Schulze, a former CPA brought in to offer a tax presentation in 1992, the SBS focused on growing an Austin support network: "A lot of lesbian and gay folks wanted to deal with lesbian and gay businesses, and it was our task to put them in touch with those resources." In addition to networking events held at gay-friendly sites like Hyde Park Theatre, La Madeleine, and the Old San Francisco Steak House, the SBS also presented a monthly educational program for its membership.

"By 1994 the board of the SBS decided to become a chamber of commerce," says Schulze. Tax benefits motivated the more-than-superficial shift – benefits that, Schulze says, ultimately never materialized. During this three-year transitional period, the organization was known as the Austin Stonewall Chamber of Commerce.

Visibility prompted the group's final name change. Some members thought the reference to Stonewall too esoteric, that it did not directly reference gay and lesbian identities – to say nothing of the confusing existence of a Stonewall Chamber of Commerce in nearby Stonewall, Texas. Thus, the "Austin Gay and Lesbian Chamber of Commerce." And while the name seemed to indicate a more political visibility, as Amy Krause, president of the AGLCC in the late 1990s, put it, "We were a business group and not a political group. The Human Rights Campaign and the Lesbian Gay Rights Lobby of Texas [now Equality Texas] were the national and state political organizations."

The waters became muddy in 2001 when the AGLCC moved into coproducing Austin's annual Pride Parade in conjunction with Equality Texas' annual Pride Festival.

Hosting, coordinating, and regulating a community-wide parade – not to mention navigating the tricky politics involved in such an endeavor – were tasks that arguably strayed from SBS's initial mission. AGLCC's interest in presenting a "family-friendly," cleaned-up version of the gay community to Austin-at-large resulted in awkward and presumptuous rules and regulations, with which many in Austin's frisky LGBTQ spectrum took issue (see "Gay Prude Parade," June 7, 2002).

Regardless of the newly stewing controversies, it was at this point and shift of focus that members like Schulze and Krause started to become less involved and distanced themselves from the organization. In 2009, when Equality Texas decided to divest itself of the Pride business, the AGLCC assumed responsibility for the festival in addition to the Parade. "At that time, the chamber was about community building, helping nonprofits get together with businesses, to find donors and venues to strengthen their organizations," says Ceci Gratias, then-treasurer of the AGLCC.

Cue dramatic music: Despite AGLCC's most successful parade and festival, and a membership roster bursting with over 325 members, post-Pride 2009 was marked by a spiteful political ousting (Gratias resigned after the board summarily dismissed then-President Jimmy Flannigan). In 2010, the AGLCC became lost in a flurry of mismanagement and budget improprieties, and saw the eventual creation of the Austin Gay and Lesbian Pride Foundation (a parallel group committed to running the parade/festival, but with a suspiciously similar board of directors). What resulted was a public relations nightmare ("Split Pride: Gay Event Plans Marred by Tension," June 4, 2010) from which both the AGLPF and AGLCC are still working hard to recover.

Nathan James Garcia, currently treasurer and director of entertainment for the AGLPF, responded to a call in 2011 for new blood in the boardroom, hoping to help heal the culture of mismanagement. "I came on board when it was half-new, half-established members, and I realized it was going to be a bit of a struggle. We put in a lot of work," he said. "We're all volunteers, and we live and breathe this. In the end, we're here for Pride." Last year's Pride was held at Fiesta Gardens and – impressively – put the AGLPF back into the black, covering not only debt incurred by the 2011 fest and parade but the lingering gross deficit of 2010's mismanaged mess. In short, the new AGLPF ate crow and lived to tell the tale – no small feat.

As for the AGLCC, with the AGLPF confidently running the Pride show, there's been a return to some of the roots of the original goals of the SBS. By 2011, the AGLCC's membership roster had dwindled to approximately 15 members, but in 2012, things are looking up. Since January, membership has plumped up to a healthy 110 members, with new businesses and professional concerns joining each week. Cook points out that "in addition to thinking about better practices for LGBTQ businesses, we also have educational and social programs for our members." This includes two meetings a month, open to the public – one casual networking happy hour and one luncheon featuring an educational component. The chamber also hosts two public Toastmasters events per month, offering a structure for improving communication skills in an LGBTQ-supportive environment.

As AGLCC turns 15, the current leadership aims to rebuild its roster. "Really our mission is the same as what it was before 2010," says Gratias, now back with the AGLCC as treasurer. (Flannigan has also returned, currently as the group's vice president.) "We're about connecting all aspects of the community, businesses and non-profits."

Birthdays are great times to ruminate on the purpose and role of such an organization – to reflect on the histories before history, or as Cook says, "to figure out where we're going," by knowing where we've been.

The AGLCC is throwing a free party for its 15th birthday, Thursday, June 21, 5:30-8pm at Austin City Hall on the Mayor's Balcony. See Gay Place and www.aglcc.org for more details.