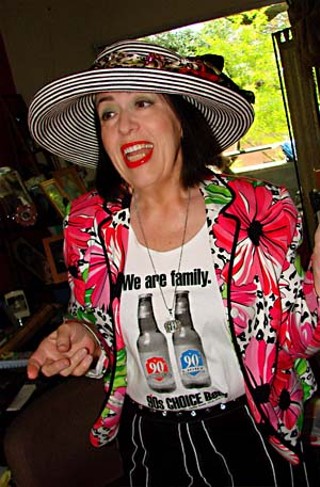 It's a basic fact of business. If you can't get it, you can't sell it. In many cases, gay bars encountered distributors which refused to serve businesses in the business of validating homosexuals. Despite pockets of bigotry, however, one often overlooked factor in early gay bars and social clubs is the strong alliance with straight businesses that support gay and lesbian enterprise.

One of the strongest allies in Austin was located at the corner of Seventh and Red River. "My brother started first," says the local legend known only as Antoinette, or Aunt Antoinette. The Seventh and Red River Twin Liquors location opened in 1982. Back then, the burgeoning club district looked nothing like today's network of convenient pub crawlable, bar hoppable, music venues.

There were, however, the pioneers. And most of those were discos and gay bars. Twin's Red River location was not only potentially profitable for the family business, it was fortuitous for the nearby gay bars. Antoinette's friendships with old mainstays of Austin bar culture meant that business was always imbricated with social pleasure. She becomes especially emotional today when remembering Oilcan Harry's performer and late owner of DJ's, Dale Jordan. The mid-90s DJ's was a particularly posh incarnation of that same Crossing location.

"Twenty-two years ago I came from Lebanon, fresh into the business, and started helping," she says emphatically. "I know no prejudice." Antoinette's warm reputation, especially with gay bars and LGBT nonprofits was earned through her marketing and public-service work. "If they wanna do parties, if they wanna do fundraisers, I get them a lot of stuff," she beams. "And you talk about distributors who wouldn't sell to some gay people? If I like it, I sell it!" she says with conviction. "If I don't like it, it's not good enough for those gay guys or the lesbians either!"

Beyond the distribution business, bars had been the target of unwarranted police harassment for decades, until the organizational efforts of Bettie Naylor and the Bar Owners Association of Texas. Naylor and Co. began to aggressively lobby for more protections from harassment in the mid-1980s. Naylor's brainchild played an important role in making gay bars all over Texas visible and viable political communities, not to mention safe. The shift in police attitudes toward the gay bars was palpable and immediate. "One year out, we started to see very positive changes," reports Naylor.

After lobbying for 10 years at the Capitol for BOAT, Naylor moved on and other organizations grew up around gay bars to ensure some form of solidarity. One of these homegrown organizations was the largely social and not so overtly political Tavern Guild, a group launched in 1984 by current Charlie's Austin owner Ray McDermott in an effort to facilitate the coordination of large multibar social events of the year (especially the then three times a summer Splash parties out on Hippie Hollow during Memorial Day, Fourth of July, and Labor Day, pouring tanned, beefy boys and their attendant dollars into the clubs at night).

In the mid-90s, back when Friends & Lovers club maven Marcilea (Marcy) Fletcher turned her focus away from owning and operating clubs, many in the gay and lesbian community wondered what she would do next. Fletcher had the "just so crazy it might work" idea to launch a beer brand specifically targeted toward the gay community. She called it 90s Choice.

The label of the beer was all foil and gay symbology – an inverted triangle and a ring of rainbow colors around the company's logo. Portions of the profits made from each case sold went toward AIDS-related charities. 90s Choice signaled an important shift in corporate marketing strategies toward gay and lesbian communities, because, as Fletcher explains: "It took [large beer companies] a month or two to realize that the empty shelf space in the coolers was being filled by 90s Choice, and it made them wonder, 'What happens if this trend continues?' We all know the influence of the gay community, but at that point no one had been militant enough to stylize a product specifically for that market." 90s Choice is still one of the only (and most assuredly earliest) examples of vertical integration in the bar business, with a mainstay liquor coming from within LGBT communities and being sold to LGBT patrons, with profits going toward charities that were helping LGBT people. A sneaky way to get one's party on while surreptitiously giving back, as it were.