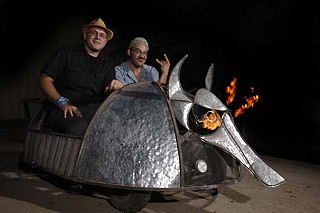 His body was sculpted by hammer and hand, his mean little face crafted with love. Built from the ground up by his two dads, C.J. Anderson and Avi Hartman, and mom, Kate Bower, the Carmadillo was then taught, or rigged, to shoot flames out of its eyes while going 30 mph. A short ride around the block garners stares of awe; some even bow.

Bower is from Southern California and Anderson from upstate New York. The two met at Burning Man in 2001 and got married there two years later. They moved to Austin in 2004 and now call it home. They wanted to show their newfound Texas pride, and with help from their friend Avi, the Carmadillo was born, a mini metal art car that comfortably seats two.

Carmadillo construction began earlier this year, with a goal set to have it debut at this year's Burning Man. We sat down with Carmadillo and family after their return from the festival in September.

Austin Chronicle: How long after the initial concept did the beast physically come to fruition?

C.J. Anderson: About three years ago, I was wondering what the quintessential Texas art car would be. Kate was working at Mojo's, and we hatched the idea one night after one of her shifts. Avi did a drawing for us. However, it was not until this past January, when I decided to will the beast into existence, that the project really began. By the end of March, we had a rolling chassis and the body frame built. The whole process took approximately 400 work hours over roughly six months.

Kate Bower: After Mojo's [closed], that was the catalyst to just go ahead and build the damn armadillo.

Anderson: I'm going to be getting out of grad school next summer – so this had to be our time. So I just started buying stuff to make it in to stuff. Thank God I actually ran into somebody who knows what he's doing – at least the sculptural and artistic stuff. Then I figured out how to make fire stuff.

Bower: My role in all of this was just hanging out drinking beer in Avi's shop and asking ignorant questions.

Anderson: Mine. Just picked it up watching some of the flame effects at Burning Man.

Avi Hartman: It's entirely necessary, because if you don't have fire, you're nothing.

Anderson: And it makes a really great noise.

Hartman: It can't just be some golf cart with a bunch of fun fur on it. It's gotta be a fuckin' rad armadillo.

Anderson: That's right. ... It's kind of [like] hunkering down and a time of introspection. Digging in and letting something ugly pass and sorting out how to move on with your life.

Hartman: It's like, "Why is the sky blue?" ... Why did you build a fire-breathing armadillo? Because it was there; we could. You don't have to ask why. You look at it and go: "Of course, yes, that needed to happen. Thank you for doing that." It was absolutely necessary for this thing to exist; the world needed a fire-breathing armadillo, and we were there to provide it.

Bower: We had a fundraiser party for our trip [to Burning Man] at Rio Rita. Halfway through the night, Avi comes over to me and says, "Hey Kate, want to come with me to get cigarettes?" I said, "Are we taking the Carmadillo?" He said, "Yeah, the liquor store is just a block away." It turns out to be about a quarter-mile away. And we are bombing down Sixth Street in the armadillo, and I was thinking, "Okay, this is terrifying, but this will probably be the most amazing headline the Austin-American Statesman has ever had: 'Area couple in flaming armadillo killed by Lincoln Navigator.'" It was terrifying, but it was all worth it when we figured out this was the most exciting thing that has ever happened to the drive-through liquor store guy.

AC: Have you guys had any run-ins with the cops?

Anderson: Yeah, they turn the lights on for us. We drive our friends around this loop [near Avi's shop]. And they'll park and turn the lights on, because it's a dead spot for the street lights, so they'll light up the corner for us.

Hartman: When you're obviously having a whole lot of fun, and to see a frickin' armadillo car, they go: "How could I be mad at that? There's no way to be mad at that. I'm not even mad about the other shit going on." Everything disappears, and all you see is an aluminum armadillo.

Bower: I think I'm almost used to it, since I've been hanging out with this thing since March. But sometimes I'll catch it from a certain angle and be like, "Wow."

AC: What is the Carmadillo's purpose?

Hartman: The Carmadillo's entire purpose is awesome, making the world just a little bit radder than it was yesterday.

Bower: It was never intended to be anything other than that.

Hartman: And it works too. It puts grins on people's faces.

AC: Whenever you take the Carmadillo out of Austin, do you feel like you're representing this city?

Bower: People work really hard at doing their own thing here, and it's absolutely respectful.

Hartman: Kate, C.J., and I financed this thing ourselves – we didn't have a sponsor or anything – and it's totally worth it, because it's permanent fun.

Bower: And he can go anywhere we want. All we have to do is go down to Longhorn Trailers, hook it up. Then we can take him down to Barton Springs and watch little kids freak out.

AC: Is the Carmadillo perceived differently when you take him outside of Austin?

Hartman: Yeah, people think it's an aardvark. They say, "Nice aardvark." Where the hell are you from?!

Bower: The looks we got on the road on the way to Nevada and the looks we got on the street driving around here were very different. People around here were completely ignoring it. But we were on the interstate going through California, and people's looks were a combination of just totally skeptical and horrified, especially seeing Carmy's face poking out the back of the trailer. When we were driving through the Southwest, some people were looking at us in such a way that I was wondering whether there was something horribly wrong with the load, and I'm like, "Is all of our stuff flying out the back?" But, no, it was just that the Carmadillo was exposed.

AC: So, the intention was to have Carmy ready to go by the time Burning Man came around?

Bower: It's kind of great that this was conceived as a Burning Man art car, and that's what we were thinking when we were building it. And when it started taking on a life of its own, it started to become a much bigger deal than that.

Hartman: Burning Man was just another stop on the world tour.

AC: Did you have any training for building something like the Carmadillo?

Hartman: I know how to weld. And I wanted to drive an armadillo. ... I have an utter lack of shame and inhibition, so if I want to do something, I figure out how to do it. I hate to sound all New Agey, but anyone really can do anything.

Hartman: It's a serious learning curve, but as long as you have a grin on your face, you'll be fine.

Bower: Somehow I know what a torque converter is and what it does, same thing with the centripetal clutch. I actually managed to learn a whole lot just by hanging out and drinking beer at Avi's shop and asking ignorant questions.

AC: What sort of complications arose when you guys first started working on the Carmadillo?

Anderson: The third engine was the one that actually worked. We had to learn all about centripetal clutches and torque converters.

Hartman: Lots of learning on the fly. There's quite a bit of redneck engineering on this thing.

Anderson: There were a lot of times when you're standing around looking at a problem, waiting for the answer to present itself. And it kept on happening. We had faith that it was going to work out. And it did.

Hartman: That's because Carmadillo wanted to live. It took on a life of its own.

AC: Were there any safety concerns or complications with the fire?

Hartman: I was afraid that if we had fire in the eyes it would ruin the face. And then one night we tested it, and it was fine.

AC: How fast can the Carmadillo go?

Anderson: If the propane tank isn't onboard and there's no passenger, it can probably go about 30 miles per hour.

AC: What is the Carmadillo made of? The basic materials?

AC: Carmy is still pretty young, but what is your fondest memory so far?

Hartman: We did our first real test drive around the block after we had the head attached. ... I stood in the driveway and watched him come around the corner; he looked so fucking scary. And I was like, "Okay, I'm fucking in love." It's the coolest thing I've ever done.

Anderson: When me and Avi went to the Department of Mutant Vehicles at Burning Man. We were on our way to go demonstrate that this thing has flame effects and all these sharp edges and all this weird stuff going on. We're on top of things: We got our first aid kit; we got our fire extinguisher. We're on our way to show them that we got it together and then ran out of gas about 100 yards from the DMV. We stood up, and we're like: "Shit, dude. We're out of gas." A guy 15 feet away from us stands up and says, "Hey you guys need any gas or oil?" And he totally filled the tank on his dime.

Bower: If you were driving a crappy art car, that wouldn't have happened. I just like all of the moments when people are surprised by it, and I'm having a hard time picking one. Seeing the face on the guy at the drive-through liquor store – that was hilarious. Seeing little kids interact with it is great. It just makes people so happy. And you never get tired of seeing that.

Hartman: It's really for the kids. ... And they don't ask a question other than "Can I drive?" They don't need any explanation; they're just like: "Yes! Just what I wanted!"

AC: When and where is the next appearance?

Anderson: Carmy's next scheduled appearance will be at the Alternative Softball League playoffs to cheer on BookPeople's Filthy Animals. He also frequents regional Burning Man events, builder events like Maker Faire, voter-registration drives, and really anything Austin-focused where a little more weird is needed.

Bower: Carmy is absolutely for hire.

Bower: We're hoping someone will come to us with a really off-the-wall idea that we haven't thought of yet.