As Austin Pride revs up, will its soul get lost on the roadside? 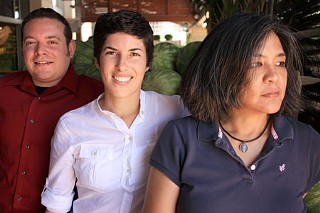 Actually, no, never mind. It's Austin's Gay Pride. Your kids are fine.

See, here in Central Texas, Pride is family-friendly – and not just that family – all families – gay, straight, young, old, you name it. Ask anyone on the board who is planning it – they'll tell you the same. They'll say, "Our Pride is 'educational'; our Pride is 'benign.'"

Our Pride is something that does not resemble the wild frenzies of San Francisco or Chicago or even our just-three-hours-away neighbor Houston, where street parties and festivities cause uptight suburban haircuts to quake, timid in the face of overt sexuality and intoxicated freedoms, the sort of things that are televised and played in a loop on Christian Broadcasting Network, the wild and adventurous acts that give Pride its spirit – its soul.

Or ... its bad reputation. It really just depends on who you ask.

The concept of Pride originated out of a riot in Greenwich Village, New York City, June 28, 1969, at the Stonewall Inn to be exact, a speakeasy gay bar. After the events of that fateful evening, Stonewall became known as the place where, for the first time, gays, lesbians, drag queens, and those deemed "different" stood up to the oppression they regularly faced. In 1969, even the simple acts of same-sex dancing and canoodling were enough for search, seizure, and a nice beat-down. Police would raid gay bars on the regular. Queers were sick and disgusting and an easy target. But on that June night, after a day of laying beloved icon Judy Garland to rest, those angry Stonewall patrons pushed back in revolt. The event is cited as the beginning of the modern American LGBT movement. In honor of Stonewall, most communities celebrate Gay Pride in June with locally sanctioned celebrations without the threat of being beaten bloody, thrown into jail or a mental institution, or just plain killed dead.

They had a riot. We get a parade. Yay.

Austin's Pride comes courtesy of the folks at the Austin Gay & Lesbian Chamber of Commerce and Equality Texas, two local buttoned-down organizations that work for policy change and play by the rules, thereby helping to define the character of our city's gay culture. These are the organizations that negotiate with the city and craft out the official expression of pride for Austin queers. It's a lofty goal, but they take it seriously.

This year's celebrations include an all-day festival on the iconic grounds of Auditorium Shores on Lady Bird Lake, featuring nine-time Grammy Award nominee Meshell Ndegeocello and queer-core legends Pansy Division, among others. Veterans of Prides past will recall fenced-in treasure hunts for shade at places like Waterloo Park, Fiesta Gardens, or even a parking lot, with folks of all stripes turning crispy and sweaty, baking in the face of rainbows and wearing sunshine like sunburned solidarity with local gay politicos and celebs.

"We had to advocate to the city of Austin and the Police Department [to make the Auditorium Shores move possible]. Some really awesome council members pushed us through," said Marianne DeLeon, the director of development for Equality Texas. To get City Council's backing, she said, "We really just had to rally support from the community."

And rally they did. Both AGLCC and Equality Texas speak the language of red tape and white paper and know how to drum up support. Thanks to their collaborative vision, Pride is finally getting a true home.

Austin Pride 2008 may very well establish ours as a destination Pride, luring more and more folks into town from across Texas' rural communities, where Pride dare not speak its name. Organizers assessed previous Prides and recognized the chaotic nature of holding the anchor events on two different weekends: the parade on one weekend, the festival another, with events strewn about the June calendar. Out-of-town guests were divided on which weekend to visit, and locals were confused as to where Pride lived.

This was at the crux of this year's planning. The location upgrade marks Pride as one of only 24 events held at Auditorium Shores, an iconic and important landmark in our city's history. That's a big deal.

It's also a big deal that now the parade will pour out of the festival, with hopes of merging the all-day event population into the group lining the streets to enjoy the nighttime parade. The parade lineup will be on display at the festival so people can vote on their favorite float prior to rollout. The route has been redesigned this year, as well (see map). The procession begins across the First Street bridge before turning onto Fourth, Austin's gay-bar central.

"Austin's gay community is a grateful bunch," explained Ceci Gratias, the membership chair of AGLCC. This is Texas, and even in 2008, gay people who travel in from less tolerant climes are happy just to participate in such pageantry and be able to say, "Yes, I'm gay, and I don't care who's Downtown on the sidelines watching." And that's kinda beautiful. Kinda 1950s. But, beautiful nonetheless.

"Traditionally, Prides get a bad rap," said DeLeon. "The gay community does not want to be identified with that party atmosphere. Austin [Pride] is definitely a benign, family-friendly event. We want to make sure both events, the festival and the parade, are accessible to everyone. And tasteful."

Tasteful? Pride? "And adult content," Gratias chimed in. "It needs to be educational. We want to make sure that if [a participant offers] adult content, there is a reason for it."

Granted, Austin Pride is a far cry from the Prides celebrated in San Francisco's Castro or Chicago's Boys Town, two world-renowned Pride celebrations teeming with adult content. Audiences do not blink at assless chaps, hairy chests, drag queens, or topless dykes on bikes. They wink at them or cheer them on. The freedom of sexuality is played out on the concrete. To participants and organizers of these larger, more established Pride parties, Austin's may seem tame, perhaps even a bit repressed. The point of Pride in many more established, urban gay communities is to represent a certain progressiveness. Some circles within these communities feel it is a given right, their mandate, and their responsibility to remove the stigma from sexuality and to express personal freedom as gay Americans, who still suffer outsider status in too many places around the globe. Normalizing or sanitizing the sexual aspects of queer culture is viewed as assimilation or even oppression.

When we begin to duct tape the face of Pride, a "proud" celebration that is supposed to stand for freedom and bold self-expression, does the concept of Pride become a watered-down banner for mainstream absorption?

"Our biggest issue is [that we have] minors watching the parade," said Gratias. "We don't really need to express ourselves so outrageously. And it's not out of acceptability but rather out of respect for the families watching."

Certainly, there is honor in wishing to not alienate anyone. It is a glorious thing to see toddlers and kids hoisting signs that say, "I Love My Gay Aunt!!!" It is stirring to watch the members of Atticus Circle or PFLAG or other proud straight supporters walk alongside Austin's gay community. There is no dishonor in keeping it "tucked in" to invite and welcome all people.

Ultimately, it's about unity. The love that pours out of this unique, annual party bears the hope of making a safe space for gay people, for transgender people, for people of color, for straight people, for those reveling in the gray bath of sexual fluidity, in a sense, for everyone. It's an opportunity to flame the fans of self-expression, the inclusion of every being who seeks to be proud of being exactly who he or she is. To that, the mission of Austin Pride succeeds.

Whether this mission is perceived as watered-down for mass consumption or as a hearty welcome mat embracing the diversity of the human family, Austin Pride will roll out a new look this weekend, and we'll be the first to tell her she looks fabulous – even if we have to squint through the cracks to catch a flash of boob or hair-bears in assless chaps.

Then again, there are always the afterparties.